This Is the Garden – Giulio Mozzi 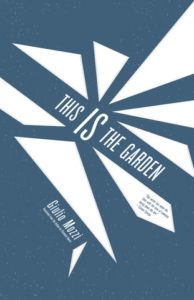 For Giulio Mozzi, the garden referred to in the title of his first published work is both a metaphor for human failing and a gloomy, declarative argument that paradise exists around us yet, if only we could enter it.

Winner of the 1993 Premio Mondello, the influence of Guilio Mozzi’s eight story collection This is the Garden on Italian literature long predates the English language translation of the book. The first of over twenty-five published works by Mozzi, these stories read intimately despite the careful anonymity of their narrators, all of whom live introspectively inside vivid imaginations that are  dislocated almost completely from their physical surroundings.

In “Cover Letter,” a thief imagines what life is like for the woman whose purse he’s stolen, and sends her back the letters he’s found inside along with one of his own.

The narrator of the next story, “The Apprentice,” is a young errand-runner who wants nothing more than to move up the ranks at his job, to man machines for which no function has been revealed, and by which no named object is produced.

In almost every story the reader is privy to a train of thought, or the process of thought itself, without learning much at all about the identity of the lonely thinker. Longing, desire, resignation, and hope are implied without any indication of personal history, and it is through keeping up this strange dislocation that Mozzi’s mastery reveals itself.

Two stories stand apart in that they are more narrative and deal directly with the spiritual. In “Claw,” an elderly man who spends years alone takes house visits regularly from only one local woman confesses all to an Englishman new to his village, and in “Tana”, a girl paradoxically comes to term with sexual embodiment — her own and others’ — through an unlikely encounter with a filthy angel whom she lends a bath and place in her bed.

Some of the shorter stories, like “Trains” (about a man bound for the city in which his ex-lover lives) and “Glass” (in which someone struggles to find themselves in the pieces of a broken window), are vehicles for sweet reflections, but feel incomplete unto themselves even as they speak to the other stories. “I understand now,” the narrator in “Glass” tells us, “that gathering shards strengthens my soul, comforts it, helps us to see that even if the windows have shattered, they can still be recovered, piece by piece . . . And I’m glad this is the sort of work you can’t finish — really, it would be extremely sad to finish, to find yourself with your soul all in one hand.”

If only the original letter writer in “Cover Letter” could hear the shard-collector as he writes sadly of time spent in his garden that “once in a while . . . I think you’re in the garden, too, and this thought is so intense that your soul, wherever you are, feels drawn here, and it leaves your body for just an instant . . . then slips back to you before you’ve even noticed it’s gone.”

If only Tana could truly know another person, she need not learn that even heaven on earth itself cannot eliminate the human feeling of fracture.

Emily Oppenheimer spends a lot of time with her band Total Slacker, but when it’s not a bass in her hands it’s a book. Her favorite place to read is the floor of her bedroom with her pet bunny, Taco, in her lap.