Everything Happens as It Does – Albena Stambolova 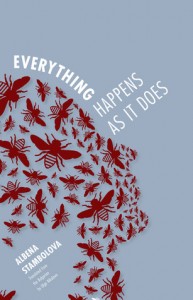 It is rare for a book to be as aptly titled as Everything Happens as it Does, Bulgarian author Albena Stambolova’s first novel and her only work currently available in English. That everything simply happens “as it does” may seem incontrovertible, but nonetheless it can be a challenging sentiment to accept in the slippery, regret-laden context of lived experience. The assertive simplicity of this difficult premise sets the tone for Stambolova’s brief, tightly written work, in which all circumstances and emotions, beginnings and ends, joys and disasters are presented in unruffled prose as the steady unfolding of history’s inevitability. In Everything Happens as it Does, contingency and determinism go hand in hand: everything is random and we exist at the whim of chance, and yet things can only be the way they are. The stories of a handful of comingling lives unspool with the beguiling sense of fatedness that overtakes all events once they’ve happened the way they’ve happened to happen.

Everything Happens as it Does is written entirely without dialogue, which causes the novel to read like a fable or fairy tale, told from the distance of eternity, not mired in individuals and their details, but rather observing as the smooth wheels of time churn and produce the effects they will produce. But while fable-like in its narrative mode, there is decidedly no central moral or didactic function to this tale. Any given situation is simply offered up as a collection of facts that must be absorbed and accepted. The novel begins to read as an allegory for itself; it is a story about what happens when you pull a narrative out of a life, which is that, simply, you find yourself observing a series of events following one after the other like dominos, with no more of a sense of purpose. That very lack of purpose or didacticism, however, itself conveys a particular perspective on the nature of life.

Stambolova explains in her introduction, “This story considers itself the story of everyone . . . It is simply the story of women and men who are mothers and fathers, sisters and brothers, loved ones and friends . . . or, in a nutshell, of people who are tigers and lions, oranges and lemons.” And as promised, the seven characters that move in and out of Everything Happens as it Does are at once general and singular, their stories both everyday and utterly unique. Stambolova frames her novel in such a way as to suggest that she has drawn up something that approximates the kinds of relationships and experiences one might find if one were to isolate any small cluster of human beings passing through their moment of consciousness on earth.

The various characters of Everything Happens as it Does carry narrative threads that wind around and through each other. Some threads begin all balled up together, like that of the twin siblings Valentin and Margarita and their mother and father Maria and Phillip, and slip apart. Others start out at a distance and wind their way in towards this familial center as it begins to disperse. We follow molecular biologist Boris from childhood, and meet him again as Maria’s second husband. The lawyer Mr. V skirts the lives of Maria, Valentin and Margarita, but those encounters ricochet out through his and their lives in ways both consequential and incidental.

As the previous paragraph demonstrates, it becomes necessary to describe Everything Happens as it Does via physical metaphor, to convey the materiality of the narrative. The novel can be thought of as composed of balls of thread, knotting up together and unraveling. Or it can be conceived as consisting of lives that knock about like marbles, but marbles that instead of being all clustered together and dispersing from a central point with one, paradigm-shifting impact, simply slide from corner to corner, resting for a moment or two, but always slipping on an unsteady surface. Or it is like a game of pool played with unsteady hands; balls are grazed by other balls, scratches are common, and intention is difficult to isolate.

This conception of lives laying themselves out as contingent but incontestable matter, however, does not preclude astute description of emotion. Depression, love and heartbreak, familial alienation, grief, spontaneous and causeless joy; Stambolova draws precise prose outlines around all these experiences.

She writes of Boris, Maria’s second husband, and his first encounter with grief:

He wasn’t even sure he knew what was happening to him. The whole world was quaking, shaking off some kind of incomprehensible unmemorable dream.

She describes the twisting and unbalanced dynamics of love:

After meeting Maria, his center of gravity was transposed out of his body, and in the beginning this gave him strength. Strength that Maria absorbed.

And the interlocked joy and frustration that emerge from the incongruity between imagination and reality:

While climbing down the stairs, his legs tingled with the fainthearted ecstasy of his imagination. So much more powerful and worthwhile than real life, where everyone had to play only his or her part.

Emotions, however, blow through characters like wind, pushing them in various directions. These characters exist outside of reason or control; strength is something that comes and goes, and grief shakes the body with the rest of the earth. In fact, there is ultimately very little conception of “choice” in Everything Happens as it Does — and whatever a reader might think about that philosophically, it feels utterly true in the context of Stambolova’s storytelling.

But for all the potential weightiness of dismantling a conception of free will, Everything Happens as it Does is a light novel. It is very short, and it isn’t weighed down by plot or character. It is simply a collection of facts and experiences. It can be read in an afternoon without much effort. The sentences pass before the eyes, into the mind, and out. But that isn’t to say that it’s insignificant or quickly forgotten. It leaves behind a shifted sense of the poignantly fleeting drama of an individual life — so small, yet so unwieldy, and so inexorably tied up with everything it encounters as it passes.