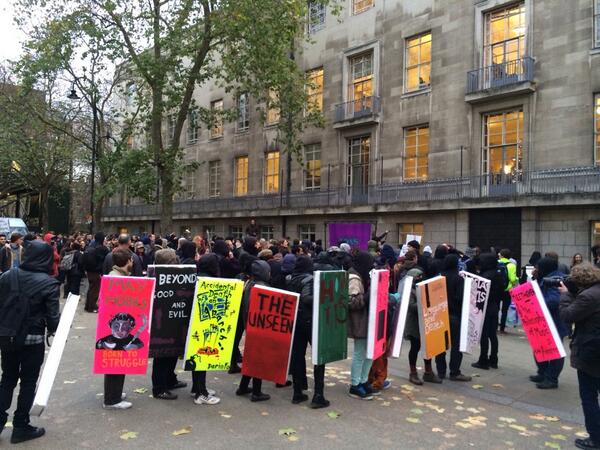 This week a number of activities have taken place across London and the UK in protest of the continued commodification of education, the real-terms reduction of wages for staff and, more specifically, the closing of the University of London’s central Students Union by the institution. Beginning with a wave of occupations at over ten campuses on Monday night, the University and Colleges Union strike on Tuesday and the violent eviction of the Occupants of Senate House Library by the police on Wednesday night necessitated a response today. Shortly before writing this, however, I dropped by the library gates. All that remained of the activities of the night before was a letter of threat from the institution’s leaders. 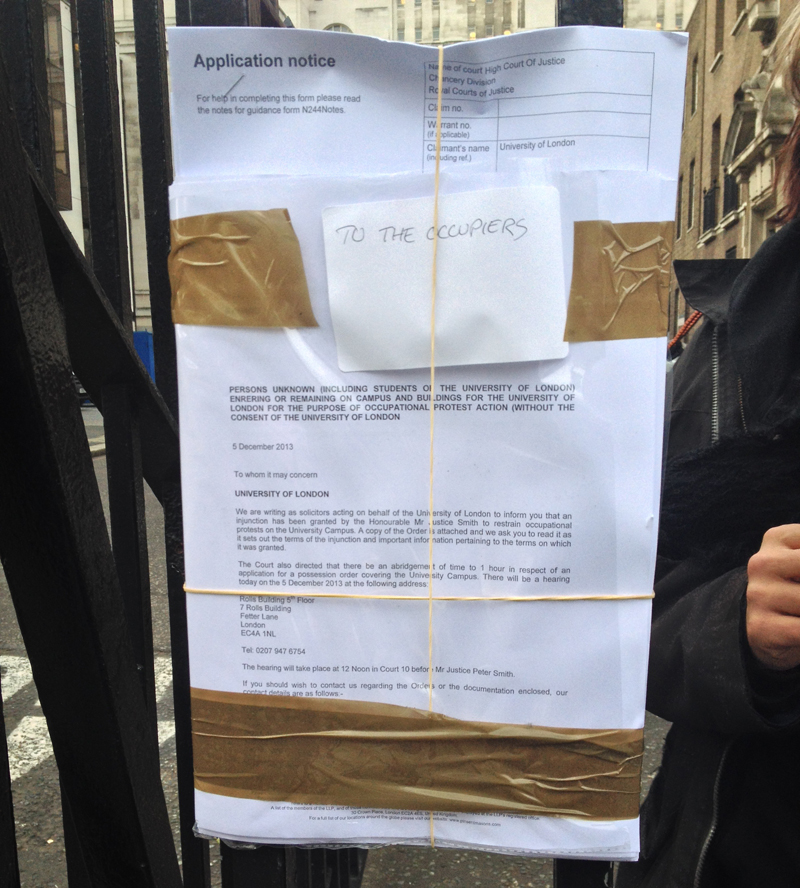 I was at the beginning of the Cops Off Campus protest that started at 3 pm Thursday at Senate House, the central building of the University of London. It was a raucous but peaceful affair; a self-organized march to the entrance of the previously occupied library. Just before we reached it the police descended, filling the road with wagons and running through the crowd to block the entrance. They then proceeded to strategically position themselves to isolate the demonstration, preparing a kettle. Protesters with shields designed to look like books lined up to defend the crowd from (mostly) men with sticks.

A profound terror grips the uninitiated when they show up at a serious demonstration. These uniformed, overworked, underpaid enforcers of state power are also nervous, but they have guns, nightsticks, and the knowledge that those around them will help them get away with anything they do. Even if they kill you they will probably get away with it. Their version of events is more trusted by courts. At the moment they arrive at a demonstration, especially one understood by them to be unofficial, your position in society, in their estimation, hits bottom.

“You have nothing to lose but your chains” was once an accurate descriptor of most oppressed. Now, however, structures of liberty, prosperity, and property are so forced upon us from the dominant culture in the UK that when the state enforcers arrive, the potential loss of everything hits you hard. The point of extending credit to those who can’t afford it is to rob any radical movement of the power that it once had in Marx and Engels’ famous manifesto. To my shame I left too early. Appointments to be kept allowed me to justify why I had to avoid, at all costs, being trapped in the kettle. But this is the point of the police action: to generate a flight response at the core of the individual protester’s being. Beneath my excuses was claustrophobia so visceral and unfamiliar that it took a moment to accept it as an actual sensation.

This is the first level of power that the police wield. It enters into the mental calculus of anyone who considers taking part in a demonstration and is set aside as a given by those who never would. However even if the terror is overcome, there are worse norms in formation. A veteran campaigner posted on Twitter, “the fact that we are getting used to this is scary.” The presences of the police at university demonstrations such as this makes clear the limits of free expression. Dissent is inevitable but only allowed when it is manageable, planned, and accounted for. This is a state of affairs that must not be accepted. Cops Off Campus.