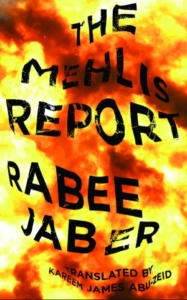 Rabee Jaber’s The Mehlis Report, translated by Kareem James Abu-Zaid, is a genre-bending historico-fantastical murder-mystery that moves the borders between life and death. The novel centers on Lebanon’s highest-profile murder — that of former Prime Minister Rafik Hariri.  Although the narrative goes so far as to visit with Hariri’s ghost, we find neither culprit nor resolution.

The book is set in 2005, just before the release of the titular “Mehlis Report.” The United Nations report-writing team, led by German prosecutor Detlev Mehlis, was charged with revealing who was responsible for the February 2005 bombing of Hariri’s motorcade. As such, Jaber’s novel is steeped in history, albeit of the very recent past.

Though the book centers on solving a murder, the protagonist is not even an amateur detective; he’s just an ordinary upper-class Beiruti. Saman Yarid is a forty-year-old architect whose life has stalled, much like the life of the city. As Yarid walks between home, work, and meetings with his lovers, he maps the city for us, including the area near the St. Georges Hotel, destroyed in the explosion that killed Hariri.

Ostensibly, we — like Yarid, and like the UN team charged with writing the report — are interested in knowing who committed this crime. Who killed Rafik Hariri? Who is to blame for the slow-burning violence that grips Beirut and threatens our protagonist and his lovers?

These questions are indeed at the heart of Jaber’s novel. But to answer them, the book doesn’t investigate what “really” happened to Hariri’s motorcade. It doesn’t leave Yarid’s ordinary world and seek access to special or secret information: phone records, bank accounts. Instead, the book looks at the surface of events; it echoes the gossip on the streets. From a “news report:”

Ahmad Hijazi, a businessman, said he had come to this restaurant (Wimpy’s) to read the paper and try to guess what Mehlis would say in his report, and figure out if Mehlis knew the full truth, or if the report would be more general. And Salim al-Halw, a bank employee, said he’s hoping for the best, especially since Germans are famous for their precision.

The deeper truth of events, or the solution to our “mystery,” isn’t found by Yarid, or Mehlis, or any exceptional character who traces information to an ultimate culprit. Instead, we search for truth by mapping the ordinary objects, thoughts, and people in the city.

In this, The Mehlis Report is similar to Elias Khoury’s 1981 novel, White Masks (translated into English by Maia Tabet in 2010), in which an unnamed sleuth examines the “wonderful, dreadful,” violent death of the fictional Khalil Ahmed Jaber, also killed in Beirut. In White Masks, the nameless amateur detective searches for the murderers by interviewing relatives and neighbors. He never comes to any conclusion; he only gives us stories piled on top of more stories.

But Mehlis differs from White Masks in that Jaber’s novel leaps the realist’s canvas and crosses the line into death. We don’t just map the city and listen in on ordinary people’s conversations. We also visit the (ordinary) afterlife.

As we learn on the book’s opening page, Saman Yarid’s sister Josephine was beaten to death in 1983. This was during the height of Lebanon’s Civil War, as Josephine was crossing the demarcation line between East (largely Christian) and West (largely Muslim) Beirut. She was a young woman then, just 19, and while she is long dead by 2005, she still follows her brother’s life from the world beyond.

The world of the dead is also mapped in great, quiet detail, as by a talented miniaturist. Josephine’s life is different from Saman’s, but not drastically. After her death, Josephine reads, writes, and works at the underworld library. This is also where the book’s dark humor emerges most clearly, as, for instance, when Josephine watches her brother on a sort of closed-circuit afterlife TV. In these moments translator Kareem Abu-Zaid does an excellent job of crafting the book’s clear, understated tone.

The Mehlis Report thus not only describes the lives of the living in contemporary Beirut, but also the lives of the city’s dead. We even spend a short chapter with the murdered prime minister himself, as he obsessively reads the biographies of those who were killed along with him. “Each time he finishes [reading the stories], he starts over.” But Hariri doesn’t take a break to tell us who did the deed.

As in White Masks, the murder-mystery doesn’t end with any hint of who might be culpable or why they might have committed this crime. But while White Masks layers stories on top of stories, eschewing a “solution,” Mehlis takes us to the afterlife’s punishments. We learn what happens to murderers and other criminals. What happens to those who write books for popularity:

He used to write for the sake of prestige. In this world he only writes a single sentence: “I write so as not to choke.” That’s the sentence. He has to write it over and over again on the page, from right to left, from top to bottom. . . . If his hand gets tired from writing those words and slows down, the stacks of paper start to pile up over his head, choking him.

Jaber must have been writing this historical novel in nearly real time. It was released in Arabic in 2006, not long after Hariri’s assassination (February 2005) and the UN’s Mehlis Report (October 2005). Perhaps for this reason, the narrative doesn’t have a wide-angle lens. For instance, it doesn’t dig into why Hariri or his multimillion-dollar corporation, Solidere, might have accumulated enemies.

Some critics suggest that Jaber, who writes prolifically, needs to slow down or submit himself to an editor’s scissors. But The Mehlis Report makes for a glorious ramble, a leaping of the lines between investigation and gossip, between present and past, between life and death.