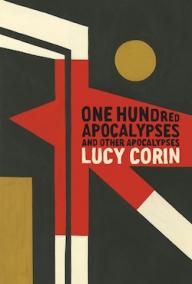 It is tempting to interpret current American interest in the end of the world as simply timely. In the midst of a recession, international tensions, and environmental crises, it is clear why we might be obsessing over how it all ends. But this interpretation forgets that interest in the end is nothing new, and that it has its roots in more immediate and primary concerns. The question of the apocalypse is, perhaps first and foremost, a question about death: in 1 Corinthians, Paul writes that “the form of this world is passing away,” words that resonate whether read as a claim about Jesus’ return or about the condition of mortality. Perhaps even more fundamentally, the question of the apocalypse is a question about nothingness, which Heidegger saw as fundamental to human existence. In One Hundred Apocalypses and Other Apocalypses, Lucy Corin takes on the subject with imagination, subtlety, and wit, in visions of the apocalypse that press us to rethink the word’s very bounds.

As its title suggests, the collection’s core is a series of one hundred short pieces, ranging between a sentence and a few pages in length. Divided into four epigraph-bearing quarters, each apocalypse vividly treats some fleeting moment, a burst of action or reflection. Many center on what we might call “an actual apocalypse” — a scenario involving chaos, destruction, and the end of the world. But many others avoid this territory, and the thematic coherence of the series shows the unhelpfulness of a dichotomy between “actual” and “figurative” apocalypses. Though divergent in style as well as subject, the pieces share a strange undercurrent. They all are truly of a kind, though just what that kind boils down to is elusive. Teeming with death, sex, and wonder, these hundred apocalypses press us to ask: What is an apocalypse, and what does it mean?

At least part of the answer to that question has to be: many things to many people. One central theme of many apocalypses is rejuvenation and the grace of a blank slate. In “Fresh,” the first apocalypse, the narrator sheepishly admits, “I was asking for the apocalypse. I was tired of the way things were going. I was looking forward to fresh everything.” Much later, in “Nice Day,” that same notion returns in a much-altered form: “The efficient orgasm is the most productive moment of the day, because apocalyptically, it has wiped the slate clean, and no one will ever know about it.” There is fear too, of course, and nostalgia, as in one apocalypse in which the narrator watches a friend squish a piece of cake while cutting it and wonders whether this might be the last piece of cake ever. More than anything, Corin embodies feelings and ways of thinking too precise and true to express in any words other than her own. Ingeniously, in granting herself the form of the “apocalypse” as distinct from, say, a story or poem, Corin gives herself space to re-negotiate the formal constraints of these genres; some apocalypses focus on image and effect, others on tight narrative, while many defy any such attempts at categorization.

Juxtaposed against these hundred apocalypses, the three stories that begin the collection reveal themselves as apocalyptic, too, in Corin’s mysterious, expanded sense. In the world of “Madmen,” upon reaching puberty, adolescents select a “mad” companion from an institution to accompany them through life. Besides being an illuminating critique of perceptions of mental illness, the story is an accomplished reflection of the cosmic-seeming implications of growing up: coming-of-age as a world ending as well as a rebirth. “Godzilla Versus the Smog Monster” addresses the complex relationship between catastrophe and those observing it from afar. As California succumbs to disaster, the young, far-away protagonist is tucked away with a girl he may love:

Again, he feels cozy. He can’t help it. California is burning, the fire gobbling Eureka, all that marijuana up in smoke, people and animals are dying, the air is poisoned, the ocean is boiling, fishes making for Hawaii as fast as their flippers will carry them, rock tops exploding from sea cliffs like missiles, and he feels cozy, trying to figure out if maybe he’s attracted to Sara.

This micro-apocalypse reverberates out into the rest of the story, highlighting the apocalyptic implications of its more mundane and personal moments.