They Dragged Them Through the Streets – Hilary Plum 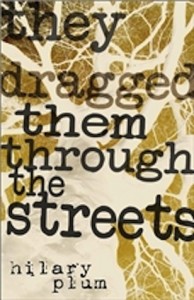 In Hilary Plum’s debut novel, They Dragged Them Through the Streets, a veteran of America’s occupation of Iraq returns home safely only to take his own life. Furious and forlorn, his brother and a group of friends gather to plan a series of bombings on home soil in protest, until one of them is killed in a blast. The novel orbits around these two deaths — Jay the veteran and Zechariah the pamphleteer — following the survivors in a series of interweaving, elegiac whispers. Four vivid voices wail, report, and reflect in the wake of the two deaths — and in the wake of the war so far from yet so near to them.

Each narrator brings a unique and vital perspective to his or her account. Vivienne, a writer and Zechariah’s lover, battles crippling clinical depression. Sara, a nurse and homeless shelter volunteer, watches the aftershocks of war in the faces of forgotten veterans. Ford, the fallen soldier’s brother, struggles between his duties to his parents, to his friends, and to the brother he has lost. A, Ford’s girlfriend, named only by this initial, returns to school to study journalism as she struggles to somehow make a difference.

The voices meander back and forth through time but coalesce around the deaths: in dismay, in protest, in ululation.The story moves — not forward, but into itself, as the narrators struggle to understand the war and their place in it. Plum powerfully evokes the ghosts of the dead. We mourn Zechariah as the narrators recall his enthusiastic, well-meaning radicalism. We miss Jay as summoned by Ford’s memories, from glimpses of their shared childhood, to his turn to drinking after the war, to the day he is found hanging from a tree the brothers had once climbed and played on. The presence of the dead lingers just as strongly as that of the living.

Plum gracefully commands the novel’s tone: each voice remains distinct in that character’s viewpoint and concerns, but also merges with the others in a pulsing thrum of grief and confusion. The device of naming each character mainly by his or her first initial aids in this gentle convergence of voices. Fittingly, the narrators are least distinguishable in the moments when they find themselves asking the most primal questions. Late in the novel, when Ford asks in desperation, “Are we redeemed?”, it’s almost irrelevant that it is he in particular who asks it.

This elegant portrayal of war’s chaos invites reflection on the possibility of communication. The point of the plotted protest bombings is not to hurt anyone, but rather to say something. The narrators frequently recall their discussions about the targets of their attacks; the suggestions include a recruiting center, a post office, a school, a museum, a construction site, a bookstore, a cemetery, and, in one crushing scene, a hospital. Each suggested target is a symbol. Their inability to settle on a location reveals their failure to articulate themselves; this failure in turn suggests that their anger, fear, and sorrow are incommunicable, or worse, incoherent.

But there is the worry, too, that the bombings, even when executed, say nothing. “We read everything, but what did we understand, really?” Sara asks early in the novel. “When what we were working toward was no more than: a building blown into glass and metal.” When they do succeed with an attack on an abandoned political office, the effect is not as they had hoped:

The charge had been weak. It didn’t look like I thought it would afterward. Ceiling held, walls erect. The room looked dirtied, the windows blown out. But the whole city was filled with boarded-up windows; from the outside you couldn’t tell that building from anywhere . . . We sent a letter to the local paper explaining why we’d done it, but they didn’t print it. It didn’t occur to us they might not print it.

The message these mourners and friends struggled so desperately to express echoes emptily. It’s almost as if their pain had never been.

War exposes the worst of humankind, but the horrors that it wreaks and the questions that it raises are not divorced from ordinary human concerns. Plum emphasizes this connection by focusing her narrative on bystanders to the war proper. The same issues of interpersonal connection that plague the characters with respect to the war affect them apart from it, too: Vivienne’s mental illness isolates her, and even in her writing she fails to truly reach others; at the hospital, Sarah struggles desperately to connect with her patients. For all of the narrators, an inability to communicate thwarts their romantic and platonic relationships, driving them apart. “Even in the moments we are closest to union,” Sara reflects, “what we feel is the skin’s friction, the soft nerve-filled walls.” Even as they join together in love — or in grief or in protest — they are isolated, afraid. This tragedy pulses at the center of the novel’s anguish: that we are marooned in our own selves, yet always striving beyond.