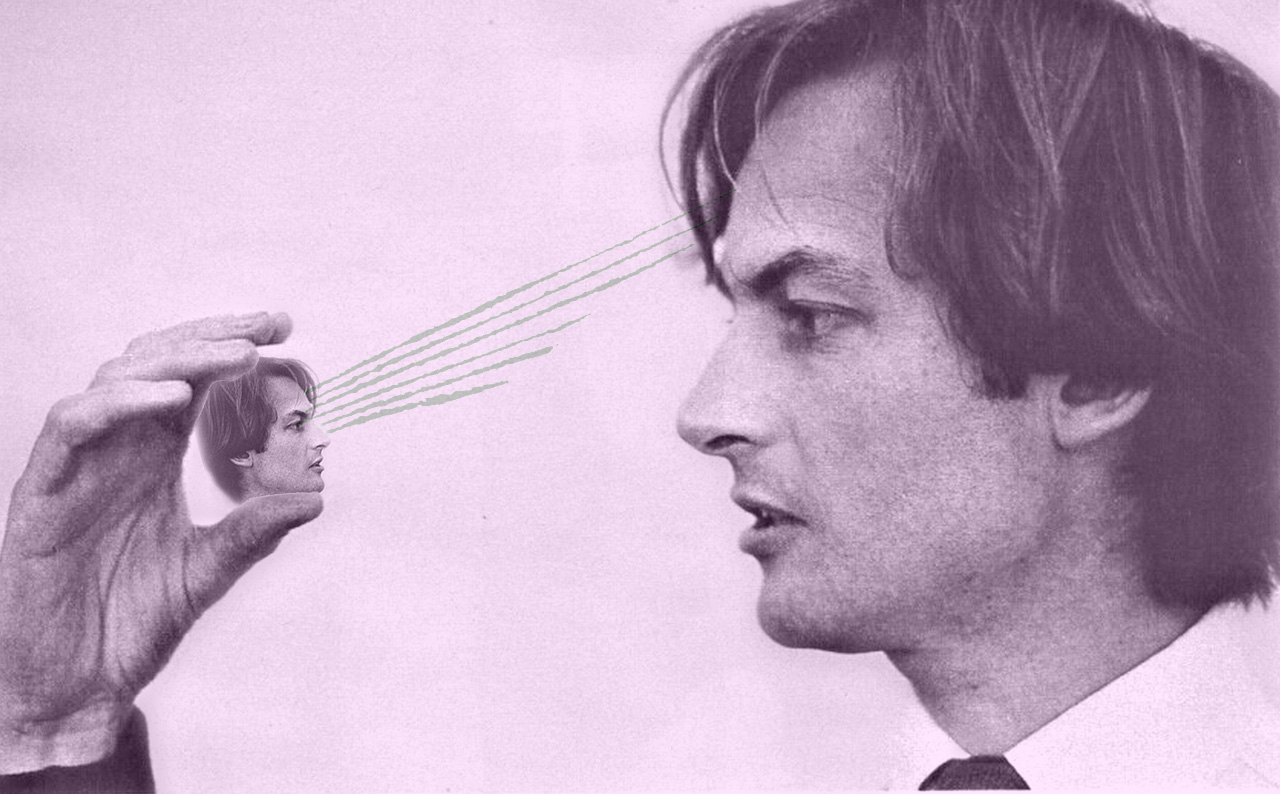 The piece originally appeared here, at samkriss.wordpress.com, and  has been republished with the blessing of the author.

Richard Dawkins wakes some time before dawn. He doesn’t blink or yawn or stretch — his eyes clang open with all the force and suddenness of a steel door. He stares at his ceiling, blue and brown swirling in his irises like cars and livestock in the centre of a tornado. Richard Dawkins’ head is fizzing with mad thoughts. He chatters under his breath as he strides out of bed and down the stairs of his Oxford home. His wife gives a small grunt and goes back to sleep. Outside a shimmering band of turquoise near the horizon brings a soft sparkle to the beads of dew hanging from trees in early bud; the heavy clouds in the distance look peach-pink and insubstantial; so do the old pale brick houses that line his street. The birds are singing in riotous chorus. “Accept my genetic information, females of my species!” they sing. “Observe my superior fitness for survival, as evidenced by the strength and clarity of my voice! Oh, and, by the way, as a bird I have no concept of God or metaphysics, but I do believe in strict gender roles and the principles of Aufklärung!” Richard Dawkins sets off into the world.

As he shambles down his street a few small birds burst from a shrub, scattering at his approach. The famous scientist suddenly breaks from his mutterings and watches them carefully. “Horses!” he says, finally. “Flying horses. Nonsense. Balderdash. Not now. Not yet. One day. Tiny flying horses, tiny flying horses, millions of tiny flying horses. One day. One day.” Later, an upended bin gives the bestselling biologist some cause for reflection. Foxes have tipped it over, sprawling its contents over the pavement. “Hitler’s brain!” Dawkins exclaims. “Save Hitler’s brain, study Hitler’s brain, gain Hitler knowledge. Hitler science. Science Hitler. Hitler Hitler.” Soon he is heading down from his wealthy suburb into the medieval heart of Oxford, towards the University, seat of learning and discovery for over nine hundred years.

A few vans making early-morning deliveries trundle past him. He smiles and waves. “You want to see some films of a lady giving birth?” he shouts happily. “Fantastic stuff. Two million years old. Baby porn, baby.” By the time he’s on Market Street the sky has lightened and there are already a few pedestrians on the road — postgrad students with their morning coffees, undergraduates still stumbling home from the previous night. Some stare as he passes; some turn their backs. Suddenly, Richard Dawkins stops dead. He raises an accusatory finger at a horrific building standing in front of him. His face is twisted in fury. It’s not a church, though — it’s a charity shop. “WHERE DO AMPUTEES BUY THEIR SHOES?” the internationally renown secularist bellows, spitting and grimacing, tears rolling down his face. “DO AMPUTEES THROW AWAY ONE SHOE?”

His journey is almost complete. As the sun, burning with nuclear fusion’s blasphemous glory, begins to float above the crenelated urban horizon, Richard Dawkins is climbing Magdalen Tower. Finally he is at the summit, surrounded by its magnificent Gothic spires. As dawn becomes day, Richard Dawkins looks out at a gloriously mechanistic universe, and begins to laugh. “There is no God!” he shouts. “There is no God! There is no God!” As he does so, his testicles sway freely in the breeze, swinging slowly, with all the dignified solemnity of old church bells.

It’s probably for the best. In his more lucid moments his proclamations tend towards an unselfconscious misogyny and Islamophobia — his thought bears the ugly stamp of the bigot who thinks that not believing in God lends his opinions some kind of Rational Objectivity. His links with the far right are extensive; it might not be a coincidence that his personal foundation shares a logo with the neo-Nazi Golden Dawn. Far better for him to be endlessly wittering about Pleistocene porn and Hitler’s brain. I’d like to think I helped in some small way: I am, after all, one of the voices that reminds him daily of an inconvenient truth. But really it was inevitable; it’s inscribed in his ideology. The ‘New Atheists’ should, I think, more properly be called the New Young Hegelians; much of their bad politics comes from their refusal to accept that their ideas were thoroughly refuted by a pair of bearded weirdos over 150 years ago. This is aggravating enough, but the madness comes in when their insistence on rationality turns from an irritating ideological quirk into a full-blown psychosis. You can’t talk to these people. “I prefer tangerines to oranges,” I say. “I’ll believe that when I see the proof,” they thunder in response, glutamated granules falling from their beards like dandruff as they shake their heads in scorn. “Maybe the juridical categories of proof and evidence aren’t universally applicable?” I suggest. The whining chorus: “Got any evidence for that?” Wander too far down the path of rationalist dogma and it’ll be no surprise if you end up like Richard Dawkins, sunning his genitals in a world that no longer makes any sense.

But what if it’s something more? What if Richard Dawkins’ madness isn’t the end of his story, but the start of his elevation to something entirely different?

Richard Dawkins is not new. Richard Dawkins has been with us for thousands of years. Xanthus of Lydia writes of the presocratic philosopher Empedocles:

Having reached the summit of Etna, he threw himself into the flames, believing that with the scourging of his body by the fire he would arise as a god. From that day he was known to the people as Μαργίτηἅγιοσ (Margithagios).

What is a margithagios? The word recurs several times in Greek writing without much in the way of elucidation. In Latin it was translated as furiosus sanctum, or the holy madman: the Roman jurist Sextus Pomponius wrote that ‘the holy madman is he who, having been a great man, places himself by his own will beyond the limit of the law and its reason. Thereafter he is the property of the gods; he is theirs to kill or take in sacrifice. That the gods will claim their sacrifice seems to be a given. Of the individuals later described as margithagies or furiosi sancti, few tend to meet a peaceful end.

The fourteenth-century German theologian Thomas von Klöt was born to an aristocratic family but renounced his worldly wealth in the service of the Church; he was at one point considered a candidate for posthumous canonisation. However, his preaching became steadily more bizarre and began to verge on the blasphemous: he began to insist that God manifested Himself in vegetable life and forbade his followers to eat any plants or anything which fed on them (flies, worms, etc. were at the time believed to emerge through spontaneous generation and were therefore considered safe to eat). He was killed with two of his disciples when he was crushed by a falling tree. Comte Xavier de Mazan, commonly considered to be an inspiration for the Marquis de Sade, took to calling himself Priapus Invictus and walking around Paris in specially designed breeches that allowed his penis to protrude through an opening surrounded by rubies and sapphires; he died in 1761 when an improperly cut diamond tore through his femoral artery. At the close of the nineteenth century, the British imperialist and industrial magnate Harry Suggle began to take an interest in Hindu cosmology and eventually proclaimed himself Īshvara, the supreme ruler of Vyāvahārika or the World Inside the Veil, to a crowd of his workers. He was killed when a rotary blade in his beet-processing factory came loose and sheared off the top of his head.

A general theory of margithagies was first devised by the structuralist anthropologist Claude Lévi-Strauss in his 1972 work Les Hommes à l’extérieur. Lévi-Strauss connected the figure of the margithagios with the Outside Men of Amerindian society — those madmen who, unlike prophets or shamans, would live within the camp but not take part in its rites. The position of the Outside Man was an ambiguous one: at once man, god, and beast. In times of grave general danger (such as drought or war), the holy madman would be ritually sacrificed; however once the rite was carried out it was forbidden to speak of it on pain of death. Perhaps the most systematic analysis of the sacred madman, however, is in Giorgio Agamben’s 1996 Margithagios: Dissent and despotism from the classical to the modern. Agamben argues that the margithagios formed a ‘state of exception’ allowing ancient societies to allow for dissenting or contradictory opinion to be at once openly expressed and rejected as madness (and potentially cut short with the life of the holy madman). In his conclusion, Agamben explicitly identifies the margithagios with freedom of speech in liberal democracy, proclaiming that ‘in the twenty-first century, we will all be furiosi sancti.’ Notably, Deleuze and Guattari refer to the holy madman in Plateau 10 of Capitalism and Schizophrenia:

We refer not to prophets or seers, molar aggregates all, but themargithagios, for whom the revelation is always a becoming: becoming-God, becoming-flames, becoming-ashes. Can we say with certitude that Empedocles did not, in the end, adopt the trajectories of an Apollo? In the margithagios space becomes a field of n points, n-dimensional movements, intersected by n plan(e)s. Margithagios haecceities form lines of flight extending in every dimension, the contagion of the sacred madman is effected through these backchannels, in which deterritorialisation and reterritorialisation form a loop or sequence connected not by graduation but consistency. There is never a city, there is only a city and a volcano, never a volcano, only a volcano and a sandal, never a sandal, only a sandal and a god. Rhizome.

The theoretical margithagios is diverting, but you get the sense that Deleuze and Guattari have missed the point a little. The holy madmen existed. For a short time they transcended our world while continuing to walk within it, and then they all fell. They were sacred to something. Something took them back to itself, something greater and more powerful than we can imagine. As he babbles about tiny flying horses and people with more shoes than legs, a question is forced upon us — is Richard Dawkins about to prove the existence of God?

Richard Dawkins stands on the top of Magdalen Tower. The sun is rising over Oxford. The fires of Etna shine their feverish light over his naked body. He smiles.