City of Angels: Or, the Overcoat of Dr. Freud – Christa Wolf 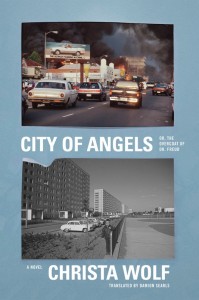 There are many lessons that can be drawn from the cases of the late Christa Wolf and of Günter Grass, arguably the two most important figures of post-war German literature. For decades both occupied a unique position of moral and artistic authority on the world stage. Both attempted in their writings to work meaningfully though a history so beset with atrocities that nuanced accounts can too often be edged out by more psychologically and emotionally comforting broad strokes.

In both cases, a set of biographical disclosures later in life challenged this authority: for Grass, the 2006 admission of his involvement in the Nazi war effort as a member of the Waffen-SS; for Wolf, the unearthing of files detailing her work as an informant (Inoffizieller Mitarbeiter — Informal Collaborator) for the Stasi from 1959-1962. Both revelations drew considerable attention within Germany and in the wider world of letters, for many serving as a coda to the period of committed literature and as the confirmation of what Kierkegaard famously called “an age of publicity,” where biographical detail does the work of careful criticism. (To stay within the German context, look no further than Emmanuel Faye’s Heidegger: The Introduction of Nazism into Philosophy  for a contemporary example of this phenomenon.) Of course, the real lesson to be drawn from these cases — the lesson which the most bellicose critics at the time of the revelations obstinately refused to consider — is that the intersection of art, history, and biography is far more complicated than we would like to admit.

Christa Wolf was a fellow at the Getty Research Institute in Los Angeles when her involvement with the Stasi first came to light in 1993. Amazingly, she claimed to have no recollection of informing, thus making a Grass-style confession impossible. As she writes in City of Angels: Or, the Overcoat of Dr. Freud:

How can I avoid feeling compelled to justify myself? That would be the most idiotic way of all to behave. But is there any possible correct, appropriate way to behave in this situation?

Wolf was a committed dissident in the GDR (East Germany) and a forceful voice resisting Western triumphalism after reunification. It would seem like some sort of explanation was owed to the public. Yet how does one give an account of oneself when the link to the past, to the psychological and cultural backdrop of such fateful decisions, is not even subjectively available? “It’s about memories,” she tries to explain to a friend, “about how we remember: my topic for decades, you understand? And somehow I could have forgotten that.”

City of Angels: Or, the Overcoat of Dr. Freud, Wolf’s final work, was written a decade after her time in Los Angeles. The gap is significant and lends credence to her sincerity in wondering how to behave given the extraordinary circumstances. Officially a novel, City of Angels is a book that hesitates between fiction and memoir. It is not a public confession or apology for Wolf’s actions. Instead, it’s a careful attempt to reconstruct the complex interiority denied by a crucial gap in her memory. For some writers, the double remove of time and place would pose significant challenges. But for Wolf it is undeniably an asset because her efforts require such a large scope.

First, there is the matter of history. One of the recurring motifs early in the book is the question of “the Turn”: of what it means to hold a passport for a country (the GDR) that no longer exists. Wolf’s exasperation with such questions quickly turns into an almost ethical project — her goal is to give these flippant questions the careful attention they deserve. This means turning to the L.A. exiles (primarily Thomas Mann and Bertolt Brecht), to the Jewish diaspora of Holocaust survivors, to her childhood in Mecklenburg (controlled by the Nazis and then the Soviets), to her various disillusionments with formal socialist party structures, to her various disillusionments with reunification, and to virtually anything that resists the easy closure that most questioners are asking of her, especially as concerns the bulk of her life as a member of the socialist party in the GDR.

There is also, of course, the matter of personal psychology, and again for Wolf this requires a bit of creative leeway. During her years in East Germany, Wolf was famous for registering shifts in the political climate in her health, the most pointed example being a heart attack she suffered shortly after giving a speech at the soon-to-be-demolished Berlin Wall. In Los Angeles, Wolf is similarly moved by her environment. Even before the revelations come to light her body is responding to the staggering range of Western democracy’s successes and failures. She is open to the wounds of American poverty (i.e. racialized poverty) and to the flatness of culture. Once the revelations of her past come out the floodgates really open. The most affecting part of the book is Wolf’s struggle with despair, conveying periods of moroseness not often found in the works of older writers:

Sometimes I think I only have to make the right kind of effort, and then the right sentences, the saving sentences will appear. But then I learn yet again that no efforts are of any use. What I need to see does not want to show itself. I suspect that it is something very simple, and that’s why it is so well hidden.

It is in this space of suspension that Wolf offers her most penetrating insights.

Despite the well-known events that hung over the writing and eventual publication of City of Angels, the book is actually quite diffuse. Some of its themes will grab readers, others will seem out of place. For example, with the recent granting of the Nobel Prize in literature to Mo Yan, many will appreciate Wolf raising the question of how it is possible to be a committed dissident (or artist) while living under an authoritarian regime towards which you are occasionally conciliatory.

Less interesting are the descriptions of dinner parties that Wolf attends with other Getty Fellows and L.A. artists and intellectuals. (This actually could have been developed into something quite interesting if Wolf reflected more fully on the history that begins in committed, political literature but then finds itself in Southern California, in a network of “global writers and artists,” drinking Sonoma chardonnay and demonstrating how to perfectly time a risotto.) Moreover, we might expect Wolf to be a sharper observer of Los Angeles, a locale which was itself going through a sweeping period of transition, like Germany reckoning with the weight of different histories living on top of one another. But in Wolf’s American scene there is something lacking. The grand themes of literature, not reportage, are her strong suit.

Speaking at a memorial service shortly after Wolf’s death in 2011, Grass made the following remark: “Christa Wolf belonged to the generation in which I also count myself. We were stamped by National Socialism and the late — too late — realization of all the crimes committed by Germans.” One can only imagine the weight that such conditions would put on an author. The major challenge that Wolf faced from 1993 up to the writing of City of Angels was to her moral authority. The public now demanded confirmation of certain aspects of her character: consistency, honesty, a commitment to ideals beyond herself. Her writing was not a platform from which to tell others how to live.

I emerged from City of Angels with a deeper appreciation of how significantly this challenge was felt by Wolf, and how in many ways it had the paradoxical effect of intensifying the final years of her life instead of forcing her into sad resignation. However, as Grass says, the full measure of this struggle is bound to elude younger readers, and maybe is not possible to write anymore.