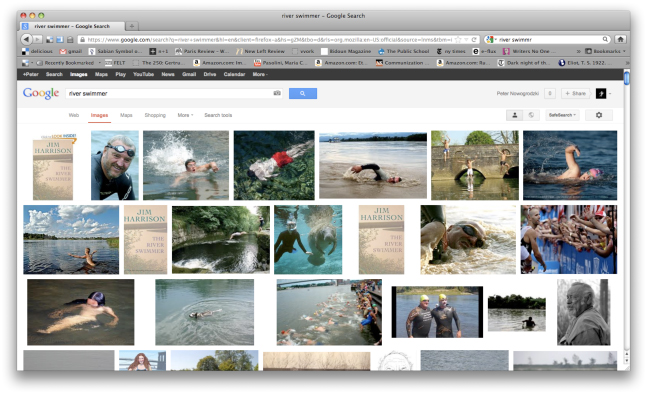 Saw two red-tailed hawks perching together on the same branch of a leafless sugar maple. One faced east and the other west.

Took my dog Simon to the dog park, where, on three separate occasions, he successfully found me hiding in three different douglas fir boughs.

Found, on page 82, a sentence ending “now he was living in an enclosure worthy of his imagination.”

Completed the construction of a white ash bed frame to support my memory-foam mattress. At night, lying on this new bed, I was pleased to read that Jim Harrison shares my distaste for rosemary, a detail which surely demonstrates the author’s great sensitivity to the subtleties of our world.

Received terrible news that a very great man I knew from college had died in a car accident. A few days before, when I had seen him in front of the cheese cooler at the health food store, my puffy orange ski jacket had snagged on a glass jar of Newman’s salsa, which then fell and broke all over the linoleum floor.

Received terrible news that my boss’s son had died from cancer at the age of 42.

Sent an email to a friend stating my interest in the possibility that reading might have a magical — maybe even alchemical — effect on the reader’s life, and that I hoped to think more about the extent to which a book’s subtle, transformative energy might be something that could be captured and communicated, even if unintentionally, by a reader’s report of her associative experiences while reading. My friend wrote back, “I didn’t know you were allowed to talk about that!”

Remembered that I had once recommended Harrison’s book Warlock to a friend and that, despite my praise upon delivering it — something along the lines of “the most romantic book I’ve ever read” — the friend had soon returned it half-read and said it was smut.

Considered a response to this friend: another gift, this time The River Swimmer, which consists of two novellas. In the first, “The Land of Unlikeness,” Clive is an out-of-work art professor who observes the “flex of a fanny” and wonders to himself “should he be beyond such voyeurism?” Hadn’t my friend wondered this, too?

Found out from the girl I tried to date that I had failed with the broccoli soup because I had not strained the brassica florets out of the base with a cheese cloth before puréeing the broth.

Googled the word strain, which can mean to draw tight (as in a fanny) but can also mean an injury, as in an over-flexed, taught muscle, like a strained heart. I ate the soup while reading Harrison’s second novella, chronicling the youthful loves of a young man named Thad, who, among other adventures, swims Lake Michigan from Muskegon to Chicago. This story, like its protagonist, is bizarre and kind of floats along, held together loosely as though in liquid suspension.

It’s easily possible that the story of the eponymous river swimmer is just a good story, meant to be read and not read into.

Heard from the postman that his father-in-law had been a famous duck decoy carver named Hans Bolte, who had given him a bufflehead decoy, once used for hunting buffleheads and now on display in the postman’s basement, where it’s likely that no one will ever spot it as a fake duck.

Spoke with a psychoanalyst who dropped by the bookstore where I work. He told me, among other tidbits, that “grief comes in waves.”

Finished The River Swimmer and fell asleep at ten o’clock beside my dog Simon.

Dreamed what can only be summarized in Harrison’s words: “How wonderful it is to love something without the compromise of language.”

Picked up Roland Barthes’s The Pleasure of the Text , which begins:

The pleasure of the text: like Bacon’s simulator, it can say: never apologize, never explain. It never denies anything: “I shall not look away, that will henceforth be my sole negation.”