For All the Chaos of Their Bodies 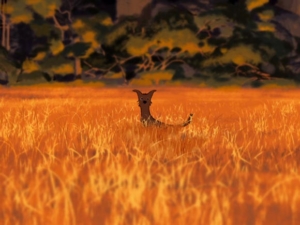 Animation, so the cliché goes, allows you to do anything. Animation can birth a man, order him to remove his head, fly him to Jupiter and then back to Earth where he grows a thousand miles tall so that he can straddle two continents with his legs. He can shrink again, morph into a flea, a baby, or a British prime minister, sing a Bob Dylan song, wrestle an alligator and then make love to a beautiful woman. He can die and then be reborn in two seconds of screen time. And yet the history of animation provides many examples of artists inventing their own limitations, therefore endowing each of their cartoons with a particular internal logic. For all the chaos of their bodies, the Coyote and Road Runner obey Chuck Jones’s physics. The Coyote lives in a world where he can run off a cliff and then fall once he realizes there is no ground beneath him. He does not live in a world where he can fly like Superman. His life is simple. Unburdened by character development, he relies on his technological intelligence and his id. He inhabits seven-minute shorts that always follow the story structure of a gag reel. Chuck Jones could do anything, but he was smart enough not to.

The five short animated films nominated for this year’s Academy Awards are all remarkably conservative in their approach to the animation form. They’re all smart enough not to do everything but to find that one thing that they can do and to do it well. Timothy Reckart and Fodhla Cronin O’Reilly’s “Head over Heels” imagines a married couple who endure two separate gravitational pulls. The husband walks on the floor of their house, while the wife walks on the ceiling. Other than that, their bodies still mimic the movements of our own in the non-animated world. The same could be said for the characters in John Kahrs’s magic realist “Paperman” and Minkyu Lee’s “Adam and Dog.” David Silverman’s “Maggie Simpson in ‘The Longest Daycare’” follows the gag-reel structure, but as in The Simpsons television show, Maggie Simpson’s movements obey the same regular exaggerated tics. PES’s clever stop-motion “Fresh Guacamole” employs the older animated tropes of morphology and visual puns.

“Head over Heels” and “Paperman” are conservative in another way as well. They’re romantic comedies. “Head over Heels” makes literal an ancient joke. The man’s feet are planted south. The woman’s feet are planted north. They are from two different worlds. How can they ever communicate? In the end of course, they do, finding a compromise that makes their marriage work. In “Paperman,” a man’s attempts to get the girl he wants are aided by a group of anthropomorphized paper airplanes. The shorts are sweet and sentimental.

Like the 10-minute life-of-a-marriage montage in Up, “Head over Heels” and “Paperman” are silent films. They find a means of communication based on both the subtleties and exaggerations of the face, the tremors of the lip, the slight widening of an eye. Compared to this, Tom Cruise tearfully declaring to Renée Zellweger “You complete me” is fodder for parody.

“The screens of the entire world are now starting to project the first international language, the language of gestures and facial expressions,” the Hungarian film theorist Béla Balázs wrote in 1924. These five nominees don’t represent any major innovations. They operate within extremely narrow confines of narrative structure, of space and time. None of them match the ecstatic assault of images of 2008’s winner “Les Maisons en Petits Cubes” or 2010’s “The Lost Thing,” both of which resist doing everything but still manage to do many more things than this year’s batch.