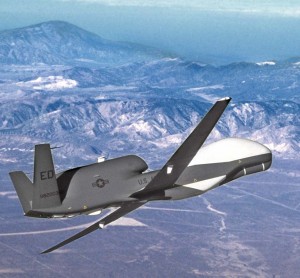 Though Whitman never mentions drones or UAVs by name, his work contains the unmistakable shadow of their presence. Like absent angels, hovering invisibly over the North American continent, the drone is prefigured in his poetry as inchoate desire: the desire for advantage in war, the desire to kill from afar, these national fascinations haunt his language.

Let us look closely at some lines of “Song of Myself”, one of the poems in Leaves of Grass. Between the lines, their silhouettes become visible, along with the pixelated faces of small figures, and the aftermath of wreckage and prone bodies scattered across landscape come into focus.

Battles, the horrors of fratricidal war, the fever of doubtful news,

These come to me days and nights and go from me again,

But they are not the Me myself.

Whitman puts himself, the subject of this song, in opposition to current events, to news of tragedies, both local and distant. They are not him, but they come to him, orbiting through his atmosphere, through the poetry he delivers. We relate to the news by remarking upon headlines of drone strikes, of new quadrocopter inventions; the uncanny hovering of the future above us. And then we continue with our lives, because the drones are not us.

Thoughts and deeds of the present our rouse and early start.

This minute that comes to me over the past decillions,

There is no better than it and now.

What behaved well in the past or behaves well to-day is not such wonder,

The wonder is always and always how there can be a mean man or an infidel.

Between the excitement, controversy, and uncanny, lies the poet, at the balance. The government defends drones, in part by addressing the balance of evil with good, the balance of tactic with tactic, this scale of strategy and justice. Technology evolves regardless of ethical considerations, which often struggle to keep up. Decisions are made day after day, justified now, and in the future. This wisdom of it all is as much a mystery to Whitman as the passage of history.

Hurrying with the modern crowd as eager and fickle as any,

Hot toward one I hate, ready in my madness to knife him,

Solitary at midnight in my back yard, my thoughts gone from me a long while,

Walking the old hills of Judaea with the beautiful gentle God by my side,

Speeding amid the seven satellites and the broad ring, and the

Speeding with tail’d meteors, throwing fire-balls like the rest,

Carrying the crescent child that carries its own full mother in its belly,

Backing and filling, appearing and disappearing,

I tread day and night such roads.

Cloistering oneself from the realities of drones is not possible. To live in America is to participate, to be, in some way, culpable. We become the drone, omnisciently observing the cosmos. To stand at night, looking upward, unsure if the dim lights above are stars or secret military satellites, if the dark spots in between the stars are empty or full of aircrafts — this is now the way we look at our world. A god’s eye-view, coupled with the algorithm of madness and wonder that guides us. Drones are part of the landscape — nature and technology inseparable.

We pass the colossal outposts of the encampment, we pass with still

Or we are entering by the suburbs some vast and ruin’d city,

The blocks and fallen architecture more than all the living cities

Whether this battlefield is simply a metaphor for conflict or actual violence, we seem to be approaching it in space and in time. The suburbs, the signs — these temporal outskirts — are visible all around us. The rubble, the midden of former civilizations we have built and made obsolete, are displaced both by high explosive blasts, and by the mental and emotional warheads that strike with concussive waves of terror, counter-terror, fascination and outrage.

I am the hounded slave, I wince at the bite of the dogs,

Hell and despair are upon me, crack and again crack the marksmen,

I clutch the rails of the fence, my gore dribs, thinn’d with the

ooze of my skin,

I fall on the weeds and stones,

Taunt my dizzy ears and beat me violently over the head with whip-stocks.

The poet’s captivating description of the pursued, cut down by those with legal right over the quarry, speaks loudly of the brutality of systemized violence. His willingness to frame himself in the role of victim is a window upon the target of a drone strike, pursued from above by marksmen dispatched by an asymmetric sense of justice.

I take part, I see and hear the whole,

The cries, curses, roar, the plaudits for well-aim’d shots,

The fall of grenades through the rent roof, the fan-shaped explosion,

The whizz of limbs, heads, stone, wood, iron, high in the air.

Even as he places himself with the victim, Whitman also places himself as the aggressor. He watches the same camera as the drone pilot. He observes from the omniscient point of view, the aftermath of the strike, as survivors repair, and remove the dead. And then once more, the shot comes again — the so-called “double tap.” Unreal destruction is cemented in memory, even as one wants to forget.

Were mankind murderous or jealous upon you, my brother, my sister?

I am sorry for you, they are not murderous or jealous upon me,

All has been gentle with me, I keep no account with lamentation,

(What have I to do with lamentation?)

I am an acme of things accomplish’d, and I an encloser of things to be.

My feet strike an apex of the apices of the stairs,

On every step bunches of ages, and larger bunches between the steps,

All below duly travel’d, and still I mount and mount.

But the poet is no victim or criminal. He is all the events of history, of all that he has witnessed, of all that he can dream of having yet to be. This angel of history walks with each footfall defining the pace of an age. The angel cannot see the future — he must look at his feet. And yet, he walks. The poet as scribe and witness cannot be judged, except in his position as watcher and writer.

Do I contradict myself?

Very well then I contradict myself,

(I am large, I contain multitudes.)

In applying Whitman’s words to a contemporary phenomenon, do we focus on the future he omitted, which he never could have envisioned? Can we judge a people, a nation, or a poet for what they have yet to do? The attempt to be timeless means that time is no alibi. But the multitudes of people, places, and times will never be singular, and will always contradict. There would be no judgment if those responsible could not be held separate from the not responsible.

Whitman knew of many spectacular things, but the contradictions we face in looking at the technology of drones was not one of them. His humanity, his America, and his time were guilty of many crimes, but not drone warfare. And yet, the fever dream of the drone was nascent in that America — in its people, its Presidents, its poetry. Whitman and his poetry do not contain drones — and yet among the multitudes, they contain so much of other things of which we have yet to envision in the skies above.