Why Can’t We Have a Good Inaugural Poet Ever? 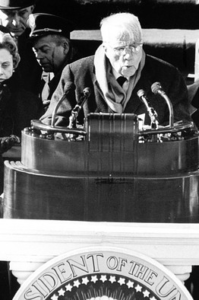 Being a public poet is a tough job, though none of our inaugural poets have had such a bad time as Robert Southey did. Southey was the Poet Laureate of England from 1813-1843, but if you’ve heard of him at all, it’s probably as an object of ridicule from his better-known contemporaries. To pick one of many examples, Lord Byron’s Don Juan begins with a “dedication” to Southey that includes one of the most condensed take-downs in literature, a stanza that culminates by punning on his name while comparing him to both a fish-out-of-water and a defective penis (“quite a-dry, Bob!”), and then continues ridiculing him for over a hundred more lines.

So at least no one’s that disappointed.

After Richard Blanco read his inaugural poem, I asked Facebook, “Why can’t we have a good inaugural poet ever?” A little later, I asked myself the same question, and I realized that he was actually a pretty good one.

After all, it’s not for the same reason that poor old Dry Bob was immortalized — he was derided for writing fawning poems about the king, but none of the last three inaugural poems have actually mentioned the incoming president, which is, well, strange. But imperceptibly, these three poets have created a subgenre with surprisingly stable rules, and comparing their works with a few others (unofficial inaugural poems and Robert Frost’s aborted effort) gives a good view on the role of poetry in public life.

To begin, the audience for occasional poems — those composed for particular occasion — has collapsed. People have relatively set expectations about poetry, even if they don’t read it: I’ve met very few people who still think that poetry must rhyme, but most people expect poetry to have an aura of exceptionality, one way or another. If you’ve ever combed through submissions to a lit mag, or looked at what gets in, you’ll see that occasional poems are rare. People are generally inclined to think that a poem should be its own occasion and express whatever caused its composition.

This is a relatively recent consensus. Occasional poetry was standard for much of history, and it was common for newspapers to publish occasional poems into the early twentieth century. At the outset of World War One, for example, there were thousands of poems printed, and people must have known that few of these poems would be read in the future. There’s still topical poetry, but there isn’t really a general audience for versifying on current events.

Consider Paul Muldoon’s unofficial inaugural poem. It’s hyper-topical, articulating his hopes and concerns at the outset of Obama’s second term: “It looks like “Mitt” is short / for intermittent, or something of that sort,” he says.  Formally, its best lines emphasize rhetoric and wit, like Alexander Pope’s verse essays:

The debt ceiling
seems much higher when you’re kneeling
for hours with your arms outstretched
like an orange-suited Christus Rex.

But the writing has to stretch in order to include every issue, so you also have him telling Obama that, in dealing with the Republicans who are “giving vent / to the mutterings of the mob,” he should “have them all watch Inside Job.” These are perfectly okay things to rhyme — but there’s not much of an audience for it, unless you’re already established.

The inaugural poets have the added challenge of writing about a particular occasion while also writing ceremoniously, which is where their particular tics emerge. Ceremonial poems tend to rely on conventions, and two major conventions have emerged in the latter three inaugural poems: (1) a titular metaphor of morning or sunrise and (2) Whitman-inspired listing.

The Whitman Sampler is included for the sake of, well, inclusiveness, which is poetically problematic, as it basically commits you to going on for too long. Maya Angelou has “You, the Turk, the Swede, the German, the Scot … / You the Ashanti, the Yoruba, the Kru,” among many, many other groups. But how will I know if the Basque, the Italian, or the Mongolian are invited to the river to feel the pulse of morning? How, dear reader?

This listing convention is made worse by the fact that it’s so sequestered. To take one of Whitman’s lesser lists — and there are many — even “I Hear America Singing” is deepened if you know about his ambivalence towards his own voice (cf. “Song of Myself” §25). His best lists are astonishing because they never simply catalog: they incarnate abstract ideas in vibrant, strange life (cf. “Song of Myself,” §6 or 8). In inaugural poems, the lists are little more than stump-style shout-outs, without the briskness of prose. I reckon this is the wrong convention to be following.

But the more curious thing is the obligatory sunrise. In each case, the morning is about the only reference you get to the particular occasion that the occasional poem is supposedly about, aside from the overwhelming tone of solemnity and caution. It’s odd that, while they oblige themselves to make the poem about the incoming government, they spend most of the poem saying general things about America.

The reason for this evasion becomes more evident if you contrast it with Frost’s inaugural poem, which he didn’t actually recite. It has lots of the weirdness and irony and rue that you’d expect from Frost (“No one of honest feeling would approve / A ruler who pretended not to love / A turbulence he had the better of.”), and it winds up sitting somewhere between Virgil announcing Emperor Augustus into eternity and a parody of the same. It’s celebratory, and places Kennedy in the context of a grand tradition, but it’s also digressive and self-aware. Most amazingly, it ends by implying the lie of the previous “Augustan age,” as well as the present one, predicting: “A golden age of poetry and power / Of which this noonday’s the beginning hour.” It shows up the problem, that you can’t have a sacred pedigree and a clean slate, both noon and dawn, at the same time. It’s no more morning in America than anywhere else.

Nobody wants to write a coronation poem anymore. Frost wrote a poem with a tone of awkward irony; instead, he recited “The Gift Outright” from memory, supposedly because the sun was shining in his bad, old eyes. That’s an excellent poem, but not at all about the occasion. Our later inaugural poets have all written poems that are ostensibly about the day and certainly don’t obtrude towards achieving their own poetic insight about America, and yet they won’t really address the particular president that’s being inaugurated.

Some commentators pre-empted criticism of Blanco’s poem by proposing an opposition between public poetry and abstruse poetry, but I don’t think this is fair to the dilemma that he faced. The occasional poem is expected to be both topical and ceremonious, two qualities that aren’t much celebrated in contemporary poetry; but that lack doesn’t simply reflect a narrowness in taste, it also means that he didn’t have much of a living tradition to draw on, beyond the dull habits of the prior two poems.

The best, richest trope that I saw yesterday was the man of leaves in James Tate’s unofficial inaugural poem.  I love tropes, daring poetic maneuvers, and while it may stick with me for months, I admit that his poem is too deadpan and oblique and discomfiting for the ceremony.

But shouldn’t the inaugural poem have more elegance or eloquence than the current conventions allow?  Or, to ask a more direct question, if poets are uncomfortable writing a poem to celebrate the president, why do we keep having someone come and read a poem written especially for the occasion?  Why don’t we just have someone come and read a good poem about America, while the rest of us trope and rhyme away without having to stand under ceremony?