Harvey Kurtzman’s Corpse on the Imjin 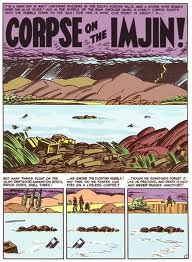 Of the 366 days this year, MSNBC’s Chris Hayes picked Memorial Day to admit on live camera his discomfort with the term “war hero.” John McWhorter, a linguist, expressed sympathy with his position. But the Internet backlash was swift and Hayes apologized. “As many have rightly pointed out, it’s very easy for me, a TV host, to opine about the people who fight our wars, having never dodged a bullet or guarded a post or walked a mile in their boots.”

The Hayes incident was indicative of a few persistent facts of American life. No matter how many unpopular “bad” wars we fight, we remain fiercely loyal to the young men and women we send to fight them. No matter how many war movies tell us about the horrors of post-traumatic stress disorder or the many ways men wearing the American uniform have sometimes behaved un-heroically in combat — think of the atrocities we see Americans commit in Saving Private Ryan and Letters From Iwo Jima — we still wish to believe that every single person who wears this uniform is a hero, someone we should emulate. Harvey Kurtzman, who served stateside in the Army during World War II and never saw a day of combat, would have none of that.

You know Kurtzman as the legendary humorist, the creator of Mad. But he was more than an anarchic humorist. Last October, as part of a new series of EC Comics reprints, Fantagraphics released a new collection of Kurtzman’s war comics, Corpse on the Imjin. The book includes the comics he wrote for two EC Comics titles Two-Fisted Tales and Frontline Combat between 1950 to 1953. He illustrated about half of them. Most of them focus on the then very-contemporary Korean War, but there are some striking historical tales as well. They are all from the pre-Comics Code era, and the stories are gruesome. Kurtzman was heavily influenced by O. Henry’s twist endings and a good number of his stories are told from the point of view of dying or dead men. A story about Teddy Roosevelt’s Rough Riders ends with a man being eaten alive by land crabs. The title story depicts a man drowning his opponent with his bare hands over the length of six panels. His face stretches, elongates. His body emerges from the water, strange and deformed.

And yet despite these grotesqueries, something surprising shines through, a relatively humane depiction of the Americans’ Asian adversaries. The image of the Yellow Peril was persistent. A few years before these comics appeared, the Sub-Mariner and Captain America would do battle with long-toothed Japs. A few years later, Iron Man and the Hulk would battle slant-eyed generals from Red China. But here, the Chinese and North Koreans are human beings with the same capacities for stupidity as the Americans.

If there’s humor in here, it comes without laughter. I’m tempted to compare these stories to The Hurt Locker, but the drawings are too grotesque for that analogy to work. The inks in these stories are black and cold. You can, if you look closely, connect the Mad satirist with the grim war storyteller. While reading them I kept imagining something that we haven’t seen: a “serious” dramatic cartoon about the Iraq War as told by Trey Parker and Matt Stone.