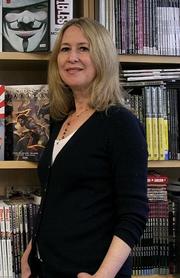 Karen Berger quit her job earlier this month. Unless you follow the minutiae of the pretty minute U.S. comics publishing industry, that won’t mean anything. But Berger’s resignation marks both the end of an era and solidifies some important, disappointing truths about the mainstream U.S. comics industry.

For nearly 20 years, Vertigo has been one of the leading—and for a while one of the vanishingly few—reliable homes for high-quality, serious comics for adults. But that, like the person leading it, is changing.

Under Berger, Vertigo helped create both the form of and market space for graphic novels. In 1993, the year Vertigo began, comics were dominated by increasingly stale, over-rendered, under-written superhero titles. At the same time, Berger was nurturing a line of offbeat, sophisticated stories within DC. While mainstream comics were gaudy and gross and dumb, Vertigo offered nuanced, thoughtful stories with adult-strength doses of sex and violence.

Crucially, Vertigo didn’t only publish monthly comic books. It collected them into the book-length editions we now call graphic novels. While that wasn’t groundbreaking, Vertigo was the first major publisher to collect virtually all of its output into graphic novels and make them a fundamental pillar of its business. It also helped move those books beyond specialty comic shops into mass-market bookstores.

Besides being a chance to praise her, the end of Berger’s tenure at Vertigo also makes clear current, and dispiriting, trends in mainstream comics—particularly as embodied by its twin colossi, DC and Marvel. Berger is leaving Vertigo because DC has been slowly, inexorably, been eroding the imprint out from under her.

Comics publishing is not awash in money in 2012. Sales are too low, expenses too high. But since DC and Marvel are owned by giant media companies (Time Warner and Disney, respectively), publishing isn’t the end game. It’s the beginning. Publishing is where new “transmedia” (sorry) properties are developed before they’re farmed out to where the real money is made: TV, movies, licensing. But for that to happen, the companies insist on owning those properties. (Unlike traditional book publishing, the writers and artists working for DC and Marvel generally don’t own their work. Instead, they’re doing work for hire, assigning their copyright to the companies.)

Not so Vertigo. Vertigo often functioned like a traditional publisher, releasing many books owned by their creators and not taking a stake in non-book income. But publishing books owned by their creators has left DC vulnerable to bad PR. Watchmen still sells 20,000 copies a year a quarter century after it was first published, but writer Alan Moore charges that DC essentially stole his masterwork. Though Neil Gaiman doesn’t own Sandman (his series was based on work by comics’ greatest tragic figure, Jack Kirby), he’s essential enough to have de facto control over the property. Bad PR and having to negotiate with creators obstructs the smooth licensing out of intellectual property.

And so Vertigo published fewer books wholly owned by their creators (it now shares in the other-media exploitation of its properties). Then its creator-owned comics started ending. DMZ. Northlanders. Scalped. Sweet Tooth. All creator-owned series whose now-vacant spots in the Vertigo slate haven’t been filled. (As further proof of DC stymieing Vertigo, DMZ writer Brian Wood says that AMC was interested in adapting the series for TV but DC blocked the deal.)

Despite these changes and Berger’s departure, Vertigo lives on. In fact, she will continue there until March 2013, helping find her replacement. But the Vertigo that that successor inherits will be a paler version of the imprint. DC Comics is entrenching itself as a purveyor of grim, surprisingly violent super heroics for 25-to-50-year-olds that focuses on licensable properties. There’s little room for quirky, potentially non-commercial stories that won’t fit in the multiplex.

Happily, Berger and Vertigo expanded the industry. While the form and content of Vertigo’s output was once rare, there’s now great diversity. From genre stories from Image and Dark Horse to alternative works from Fantagraphics and Drawn & Quarterly (to be fair, those companies have published adult graphic novels for decades) and far beyond, there has been tremendous development of serious comics. Imagine a comics reader time traveling from 1990 and seeing that New York Review of Books spread on Building Stories. She wouldn’t be able to believe it. While the part of the industry where Marvel and DC consume all the oxygen is turning ever more inward, the rest of the industry continues to open thanks to Berger’s work.