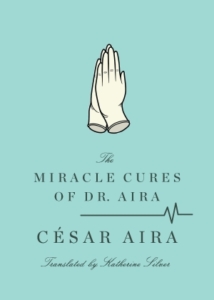 In César Aira’s The Miracle Cures of Dr. Aira, the main character, Dr. Aira, is troubled by an excess of the ruminative faculty. We meet him wandering down a street in Buenos Aires, contemplating human dominance of the planet and the way moments of embarrassment, social awkwardness, have punctuated the grammar of his existence. Dr. Aira, very noticeably a namesake of the author, strikes one as perhaps a bit hapless, absorbed as he is in self-reflection and in discoursing to a tree, allowing his meditations on his own past social roughnesses and the nature of reality to catch him in eddies of thought. The philosophy Dr. Aira constructs in his head in this scene, one decidedly opposed to realism, sets the tone for the rest of the book: “In order for action to be effective, one had to depart from the purely reasonable, which would always be an abstract way of thinking devoid of any truly practical use.”

In the midst of his placid if heavy contemplation, a sudden flurry of action introduces us to the main thrust of the story. Two young doctors in an ambulance pick up Dr. Aira and implore him to save a dying man. Dr. Aira, we find, is a Miracle Healer, and a famous one. But the request to save the dying man is a complicated one — Dr. Aira suspects that the men have been sent by his arch enemy, Dr. Actyn, a zealous devotee of the medical sciences who apparently goes to excruciating efforts to expose Dr. Aira and his Miracle Cures as lies. Dr. Aira, consequently, goes to great efforts to avoid being caught, refusing even to try one of his Cures on the seemingly dying man.

This begins to sound like a farce — and it is, in one way. But in another, it’s decidedly not. The Miracle Cures is quite slow for an 80-page novella. The opening stroll with internal monologue, for example, stretches over 14 pages. Action is slow, occasional, and often ambiguous, existing only as a kind of skeleton for the main muscle of the book: a long, weighty inner discourse on the nature of reality and the process of creation. As you read, it becomes clearer that Dr. Aira has never actually performed one of his Miracle Cures, but rather only devoted his life to strategizing, planning, and considering them. In this fact lies some of the story’s ambiguity — how is Dr. Aira famous if he’s never performed or even published on his Miracle Cures? How is it that Dr. Aira and Dr. Actyn are embroiled in this cold war of paradigms? These questions and others form lacunae that disrupt the book’s coherence, leaving the reader with a perpetual vague question tugging at the back of the mind, like being in a dream where the logic doesn’t quite connect, but one goes on.

Further bolstering the sense of surreality is the narrative’s fidelity to the somewhat perplexing inner workings of the main character’s mind. Dr. Aira has difficulty committing his attention — “attention, which compartmentalized the world, but which, in spite of frequent errors, achieved a level of efficacy necessary for its bearer to survive, and even prosper.” One feels, at times while reading The Miracle Cures, almost drunk, following the lead of Dr. Aira’s consciousness as it submerges itself into the thick, kelpy tangle of his ruminations and then surfaces to engage with the activities of the external world in the briefest of episodes. At times, Dr. Aira’s meditations are brilliantly expansive and provocative, but we’re always led back into the absurdity of the story’s premise. This is frustrating.

This waterlogged feeling of the writing, though at times frustrating, expresses a central concern of The Miracle Cures: at the heart of Dr. Aira’s work, we find, is the necessity of sorting through the overwhelming thickness of existence. Dr. Aira must find structures, paths, and metaphors that allow him to reshape reality in order to perform his Miracle Cures. Reflecting on — or rather, discovering — the methodology of his work, Dr. Aira thinks, “what had to be sought were the paths that led through the overabundance of encounters.” It’s hard not to think Dr. Aira’s work is all a big metaphor for a writer’s work — particularly when the text makes the comparison directly. As Dr. Aira struggles in the throes of his work, sorting through the universe’s elements, crafting them into a new narrative that possibilitates the dying man’s living, the narrator notes: “By the way, these exclusions and the resulting formation of a field that would serve as a different universe had an antecedent: nothing less than the Novel itself.” This explicitness is perhaps unnecessary; to an attentive reader, the connection has already become apparent. More subtle is a comparison of Dr. Aira in the midst of his work to that great literary antecedent of Spanish language literature: “He looked like Don Quixote attacking his invisible enemies, except his sword was the bundle of metaphysical foldout screens and his opponent was the Universe.”

And yet, although the parallel between Dr. Aira’s Miracle Cures and the project of writing stands out strikingly, it becomes difficult to complete the metaphor — and moreover, it remains unclear what might be the stakes of such a project. Standing up against the aggressive and exclusionary technocratic worldview that Dr. Actyn represents is certainly valiant and valuable, but what does writing have to do with saving the dying? Those of us who write might like to think there’s a meaningful answer to that question. Here, though, Aira transports the question into this semi-surreal realm in way that buffers it from much meaningful discussion. The Dr. Aira of the story, a bumbling figure unable even to maintain the capacities of his senses when overwhelmed, serves as the representative of the writerly project. But if that’s what he is, he is a failed representative; the authorial Aira teases us with a growing suspicion of what the character Aira might accomplish. The Airas leave us a bit stymied, but thoroughly entertained.