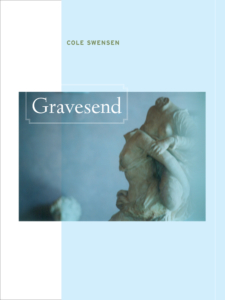 Cole Swensen’s new collection of poetry, Gravesend, is a meditation on ghosts and ghost stories. It comes on the heels of several strong offerings from Swensen, a prolific fixture in the American poetry scene, that have taken something of an archival (and if I may say so, a delightfully nerdy) turn, dealing with such figures as André le Notre, William Kent, and John Rocque (eighteenth-century cartographers and landscape designers, in case that wasn’t obvious). Gravesend, for its part, maintains a thematic focus on the titular town in the U.K., situated at the mouth of the Thames and as such historically a last point of contact with terra firma for Britons departing to the continent or the new world. For Swensen, the geographical liminality of Gravesend, site of departure for journeys to the Great Beyond, makes it a perfect foil for accessing the broader theme of the book: ghost stories. Gravesend deals with ghosts in all their forms, as they appear in stories by Wilkie Collins, Daniel Defoe, Henry James, and Sheridan la Fanu and in transcriptions of conversations with friends, other poets, and actual residents of Gravesend. If that sounds likes a lot to take in, it’s for a good reason — Gravesend never manages to dance effortlessly around its archive in the way that Ours and Greensward (the books with all those eighteenth-century gardeners and map-makers) do. The interviews in particular are a bit baggy. However, even if Gravesend isn’t Swensen’s most deft offering to date, this doesn’t stop it from offering moments of her trademark quiet virtuosity. (Gravesend is, alas, likely to be one of the last releases from UC press’ venerable “New California Poetry” series, which is being suspended due to the state’s fiscal crisis.)

Swensen’s lovely 2008 meditation on eighteenth-century landscape design, Ours, showed a flair for the visual — in fact, it was printed in a slightly larger than normal format in order to accommodate the tendency of Swensen’s lines to cascade and bound across the page. Gravesend also reflects Swensen’s careful attention to the appearance of her poetry on the page, but in a much more sober fashion: most of the poems in the books are composed of brief fragments of text separated by ample spaces, but grouped together in blocks justified on both margins. The effect, subtle and controlled, is that of prose in a process of decomposition, as if a page from a novel was either drifting apart laterally or being eaten away at from the inside. This architectural technique riddles the poems with lacunae whose semantic and rhythmic function is unclear: are the poems asking us to pause for breath? To imagine a hidden or erased text complementing the visible one? To leave a little room for ghosts? In certain poems, for example in “He Who Was,” this effect produces a network of ambiguities and resonances that redeem otherwise unremarkable material:

As the lines of text drift apart from one another, lateral paths through the poem open up: “or in the garden of the dark is an enormous room”; “and saw within the corner of his eye”; “his veil in one hand and the zinnias in the other.” Beneath the narrative content of the poem, Swensen’s visual technique uncovers a strata of fugitive, partial meanings that reconstitute the elements of the poem in dream-like combinations, personifying words that previously appeared to be adjectives (“the garden of the dark who now straightened up”) or intimating scenes of violence (“with the shears the corner of his eye”). And I use the term “dream-like” in a rather technical sense: in The Interpretation of Dreams, Freud famously insists that the unconscious realm accessed through dreams is atemporal, comprised of objects that have neither beginning nor end and that cannot be arranged in any temporal sequence. By spreading her poems across the page, Swensen gives them an unconscious: the linear narrativity of poems like “He Who Was” is layered over (haunted by?) a tissue of fleeting interactions between images suspended in dream-time. In this way, what otherwise might be an entirely straightforward narrative poem, perhaps not even a very good one, unfolds itself into a fabric of potential meanings and silences. If Swensen brings us into contact with ghosts in Gravesend, it is by means of these subterranean poems concealed in the unconscious of their printed counterparts. (It should come as no surprise that the collection contains a nod to Freud, specifically to “Mourning and Melancholia,” in the lovely “Freud Claims”: “Freud Claims / it’s the unburied inside who come back unloving / Grief is a machine         that must be assembled correctly.”)

Among the most memorable poems in the collection is “Whole Ghost,” in which Swensen tips her hand and tells us she thinks a ghost is:

Like many of Swensen’s best poems, this one gets its point across breezily: a ghost is not so much the residue of any particular person or being as it is a saturation of ordinary experience with otherness. An otherness, furthermore that has a specific, and perhaps even a political, content: “whatever a given people will not face.” Jacques Ranciere has spent more than a decade arguing that the “distribution of the sensible” (what we can see, hear, and feel on a daily basis and understand as ordinary) is always political, and if attended to carefully always discloses differential conditions of access to knowledge, power, and modes of feeling among different types of people. “Whole Ghost” performs a “redistribution of the sensible” by asserting that the sky in an ordinary, day-lit park is not only haunted but also concealing something: a boundless sea of sepia-toned faces. Whose faces? Swensen doesn’t tell us, and this intriguing attempt to formulate a politics of ghosts and a theory of collective national haunting (cf. Derrida’s Specters of Marx) goes largely undeveloped. But a more general point comes across quite clearly: haunting is by no means a fable or a metaphor but rather a category of everyday experience, a way of expressing the conviction that the sensible world isn’t sufficient to mediate a sense of the real or the effectual — that everyday sights like the sky in a park full of birds envelop absences no less tangible for being invisible.

Haunting, then, is the perception of a dissonance between the world as given and the world as intuited. In “The Ghost Orchid,” the delicate poem that concludes the collection, Swensen decides that this dissonance is best described as an aperture:

The “angel song” is less concerned with one might see through its haunted window — whether it be the dead, a sea of anonymous faces, or something closer to home — than with singing the joyful fact that there are apertures everywhere, including and especially in places where they ought not to be (sun-lit parks, for example). Gravesend, at its best moments, serves as Swensen’s angel song, providing us with a gentle yet insistent reminder: if you find that “real life” has a window in it, then you’re dealing with a ghost.