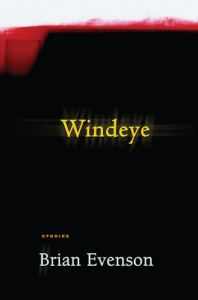 In lieu of an epigraph, Brian Evenson reveals the theme of his latest collection, Windeye, with a dedication: “For my lost sister.” Two sisters do indeed disappear in the 25 stories that follow, as does a brother, a young boy, a group of sailors, and a slew of body parts.

Most of these pieces clock in at six to eight pages (the book totals 188), and I suspect they’re so brief because something beyond characters are always missing from them. They often end right before a character commits murder, or dies, or investigates a strange noise. Protagonists wander through dark tunnels or Apocalyptic landscapes with no memory of how they arrived there. Or they spend entire stories trying to accurately recall traumatic past events. Or wondering if the people and events they remember so precisely even existed in the first place.

For Evenson’s narrators, the act of writing not only helps make sense of these losses, but ensures that their stories will not be lost in turn. “I will write this report,” notes one, “hide it for my replacement to find in case something happens to me, and then take what may well prove to be my fatal step.” Another muses that he will “continue to drag my way across the earth . . . until I am dead, until all that remains of me are the words I have written here.” For some, that fear comes true – when an author assembles 25 stories in the same volume, a handful remains memorable and others are quickly forgotten. The unmemorable pieces here often attempt convoluted, difficult to understand premises in under six pages (“A History of the Human Voice,” “South of the Beast,” “They”).

The relationship between the effectiveness and length of Evenson’s stories isn’t a coincidence. Windeye’s jacket copy labels him a “master of literary horror,” a genre (whether literary or not) which works best with simple premises and slow build-ups. After the main character in “Discrepancy” notices that her television’s video and audio aren’t in sync, the world around her loses its synchronicity. The ear of another man is mistakenly attached to the soldier in “The Other Ear,” and starts instructing him to kill people. A young boy in “Windeye” watches his sister slip into a portal to another dimension, never to return. In fewer than ten pages, Evenson makes these absurd concepts real and urgent by undercutting genre plot twists with complex emotion. Like the best horror, he uses genre tropes to explore something deeper.

Occasionally Evenson loses sight of that emotional anchoring and relies on gory clichés. Do we really need a story where a horse possesses a king’s servant and forces him to kill his family? Or a story where a young boy visiting his grandmother discovers that the grandmother is really another boy dressed in her skin? His missteps, however, point to one horror trait of which his work never loses sight: humor. Consider the narrator’s justification for murder in “The Other Ear”:

Strangling was something the other ear encouraged, though it was not adverse to him slitting a throat if need be, or even bashing in a skull. These deaths, Istvan sometimes thought, were unnecessary, but still he could not bring himself to feel guilty for them. After all, it was not he who was bloodthirsty, but the other ear. He himself could hardly be blamed.

Or this detail, which arrives midway through a story called “Process”: “My partner and I walked home, speaking politely albeit very formally to one another. He sat on the cushions that I had stuffed with hair from a dog I had known.” There is no context for the cushion before it appears and no mention of it afterward. Evenson lets the details sneak up on us and never tries to explain it. It’s hilarious, but it’s terrifying. It achieves in a sentence what entire horror films and novels and stories strive to do. The details we must infer, the lost explanations we must imagine – Evenson knows the things that aren’t there frighten us most.