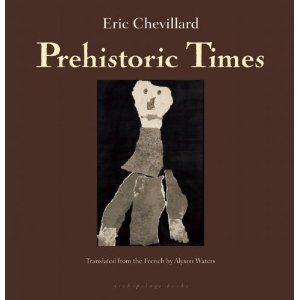 Tr. from French by Alyson Waters

In my first college Creative Writing class, my professor underlined the importance of being succinct. “Write a sentence,” he said, “then cross out all the superfluous words.” His second rule was to avoid writing about writing; he considered that a cop out. I might have already failed him on one account, but in Prehistoric Times, Eric Chevillard knowingly ignores both of these recommendations, assigning his narrator prose that is both dense and Dada-esque.

This prose is all we are to encounter in Prehistoric Times; the short novel is, in its entirety, a monologue presented by our quirky narrator, a self-loathing “archeologist.” He is an “archeologist” because he might also be a mere tour guide with aspirations to one day become a speleologist. Yet for his role as a museum guardian and guide, he is both proud and also understanding of getting paid ‘to do nothing.’

The narrator is an agitating protagonist because he is not truly a main character. The story’s primary tangent is the linear nature of his career as he finds himself replacing Professor Glatt’s last employee, Boborokina, and his surreal, absurdist commentary elucidates the fact that he lacks the backbone of a leading man, that he is neither an actor nor a reactor. He is someone who accepts and does what he is told. In this way, the narration is reminiscent of Hoffman’s “The Sandman,” but rather than questioning what is reality and what is a figment of the narrator’s imagination, the reader is left wondering why the narrator has accepted a system of order he would like to oppose and why he has accepted a secondary role in his own life.

Undoubtedly, it takes skill to elevate a mundane character to the single narrator of a novella-length monologue, but it becomes clear that Chevillard is more invested in how he writes than what he writes. The monologue begins with a sentence that goes on for twelve lines, during which I grew concerned that I would become exhausted by the short novel. However, despite the heavy use of rhetorical questions and the extended streams of consciousness, the prose, beautifully translated by Alyson Waters, proves to be Prehistoric Times’ greatest strength. The vernacular is ostentatious in the best way possible, and the occasional geeky archeologist terminology is believable coming from the mouth of the narrator, who can be imagined as a sort of David Schwimmer character during his Friends-era popularity.

Despite Chevillard’s focus on style, a central theme of the monologue can be identified in his questioning of the motivation of artists: are they attempting to attain immortality via their work? The grander point that Chevillard is trying to make is that people have always tried to be remembered. However, what we actually remember, what we consider the past, is merely the result of our need to label and categorize events. History, for Chevillard, is not an objective representation of events but rather a social construct, a shared romantic illusion. Ultimately, Chevillard succeeds in making his audience question the motives of those who wish to be remembered. Unfortunately — and probably intentionally — he does not provide answers to how such motives shape our actions in the present: what actions do we perform for ourselves, and what actions do perform for immortality?

The author makes some intriguing points about the disengagement of museum visitors, and for some, Prehistoric Times will evoke some necessary thought on posterity. However, such discussions may seem anachronistic to an audience that might have recently stood across from Abramovic in an endeavor to engage. But even for those who have already become accustomed to the existential agonies of contemporary societies, the notion of replaceability, the idea of uniformity and the lack of individualism in the labor force, Chevillard’s prose provides a pleasant read.