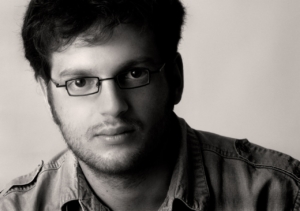 Justin Taylor is the author of a novel, The Gospel of Anarchy, and a collection of short stories, Everything Here Is the Best Thing Ever.

I don’t think literature has a blanket responsibility to do or be anything. I think it is inevitable that any given piece of literature will be affected in some way by the material conditions of its author’s life, and therefore by the cultural context in which it is produced. The author may choose to directly address The Times She Lives In and/or The Big Issues of the Day, or she may choose a more oblique approach (from veiled reference to outright refusal of acknowledgment), but either way it’s going to be there. A text’s absences are always at least as telling as its presences. That said, speed and timeliness are not literature’s strong suits. If anything, literature’s slowness (at all levels–composition, production, consumption) is the best thing it has going for it. A great book doesn’t need to feel timely now, it needs to feel timely 200 years from now. Moby-Dick being the first and probably best example I can think of.

I do not write with any particular audience in mind. I’m happy with my readers, whoever they are, and I would hope they run the gamut demographically, age-wise, or any other way you can think to divide and classify. Of course once something is actually written I might have a sense of who will find it more and less appealing — and yet you still never really know. I never expected that Everything Here Is the Best Thing Ever would receive the warm and wide critical reception it got. With The Gospel of Anarchy I knew I had written a novel that would frustrate certain expectations people had of me (especially in light of what happened with the first book) and it occurred to me that the subject-matter itself might be a stumbling block for certain readers, but I was totally unprepared for the anger and confusion the book incited. I expected — was even in a sense eager for — a contentious debate about my idiosyncratic interpretations of Christianity and Anarchism. But the debate never happened; instead there was a kind of ad hoc critical consensus that the subjects themselves were undeserving of serious attention. That was a surprise and a disappointment. On the other hand, the readers who liked that book really loved it. I’ve gotten many more letters about Gospel than about Everything Here.

I really can’t say. Having come of age as a writer in the same decade you’re describing (and at that really only a “published writer” during the latter half of said decade) I don’t have any other experience to compare it to. I think that it’s great that I can sit at home and read strong criticism from a variety of publications that I probably wouldn’t ever see otherwise. But some of the online stuff is troubling because it’s so poorly written or ill-considered, and the line between critic, reviewer and fan seems awfully blurry. It’s great that anyone can speak their mind, but great books need great readers who are also great writers-about-reading, and knocking out a three-line blog comment or giving a book a Goodreads rating is not the same as giving a work of literature your deep and full attention, or being able to translate the product of that attention into something that stands as a piece of literature in its own right, which is something else again. I had a lot of fun contributing to a literary blog, but I eventually came to feel that whatever I was gaining in pleasure, community and perhaps notoriety was costing me something else — I was losing the ability to think deeply and slowly. I’d get a half-baked idea, blog it, then move on. I decided that the trade-off wasn’t worth it. I feel similarly now about reviewing. I don’t want to spend my life writing 200-word “reviews” that are basically glorified blurbs. I want to hold my peace until something comes along that’s worthy of critical attention, and then to give that thing the best and fullest attention that I can. There are plenty of online venues where you can publish that kind of work (The Los Angeles Review of Books and The Millions come right to mind) but I think it’s fair to say that this style is the exception rather than the rule for online book-writing. Maybe, these days, for book-writing across the board.

I make my living as a teacher of literature and creative writing, so the simple answer to both questions is “no.” On the other hand, my work as a writer is the basis for my claim for sufficient expertise in these fields that I should be allowed to teach them. Also, I love teaching — really and truly — so doing it doesn’t feel like an imposition or interruption, but rather a logical and welcome extension of my work as a writer. So maybe it’s “yes” after all. I think our current economic system is a shambles and a sham. We’re all making do as best we can.

Well, my only novel to date is, as I mentioned, explicitly concerned with Christianity and Anarchism; I try to imagine a political/spiritual vantage from which they can appear to be fully conflated. I wouldn’t have written that book if I didn’t have strong and abiding interest in these two utopian traditions. In some of my short stories I’ve drawn on my own Jewish heritage. Some have felt that my work, taken in aggregate, says something to or about “my generation” — I don’t what this means, exactly, but I haven’t been in any hurry to refute the charge. Anyway I don’t see how I could ever write something that wasn’t self-expression. Even in light of my comments above about literature necessarily being impacted by its era it still seems categorically impossible that I could express anything other than myself — thoughts about and apprehensions of reality as I experience it.

I’m not sure that any such thing exists; and if it does then it’s surely fragments, a rule of exceptions, and nothing that forms anything like a whole. Don DeLillo has gotten a lot of things right.

I don’t know what you mean when you ask whether I’ve considered the question of my opinion. Seems a little meta. Anyway, the war on terrorism doesn’t care what my opinion of it is, which is half the problem. Writers have no responsibility to the unending war as writers — they have responsibility to it as taxpayers and citizens, just like everyone else.