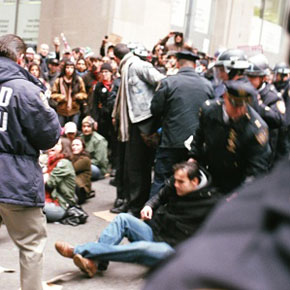 “A hundred meals and zero shits.” This best line from Keith Gessen’s account of his recent O.W.S. related arrest and incarceration should have been the piece’s title, for its heart is really in its bowels.

Published yesterday under the more sanitized, New Yorker appropriate title “Central Booking,” the n+1 editor’s long blog post  describes his arrest and the following 32-hours he spent in jail. Nabbed for blocking traffic on the morning of November 17 as part of an O.W.S. action to shut down the New York Stock Exchange (“or at least impede its smooth functioning”) Gessen and his co-protesters were taken to Central Booking, also known as the Tombs, where they sang songs, made chessboards out of miniature cereal boxes, “held discussions about European history, foreign wars, the situation of Americans in small post-industrial cities,” and waited out the interminable procedure of being processed.

The post has a few faux-sinister asides (“If we [as a society] keep going the way we’re going, we will be judged very, very harshly—and sooner, perhaps, than we think”), but on the whole, it’s more concerned with reportage than rhetoric (O.W.S. is more likely to put on a puppet show than a show trial, and Gessen presents it as such.)

“Central Booking” is a rich account of the system and Gessen provides a nuanced report of the various dynamics at work that make jail, even in its most temporary iteration, such a fucked up mess. It’s also a great portrait of O.W.S. behind bars, with many lessons for future arrestees (singing Bohemian Rhapsody with your cellmates won’t make you many new friends, I speak from experience). What Gessen really nails though, is the very basic, disgustingly solvable, gut-level indignity prisoners experience:

[S]itting there, with the stench from our filthy toilet filling the room, and with the filth in our filthy sink making me less eager than I ought to have been to drink from it, despite being thirsty, I became angry—really, honestly, for the first time. I thought for the first time, with genuine venom, of the hypocrite mayor Michael Bloomberg, a billionaire, who shut down the Occupy Wall Street encampment for reasons of “health and safety” but has not deemed it worthwhile to make sure that the toilets in facilities that he has control of meet even the most minimal standards of health and safety, such that, while I watched, about forty men, eating a total of a hundred meals, over the course of a day and a half, refused to perform a single bowel movement.

When I spent 20-some-hours in Philadelphia’s Roundhouse last week, the situation was much the same. About an hour after we were locked in our cells (3 guys in an 8×4, if memory serves), the janitor (not a corrections officer, mind you) walked by and urged us not to drink the water from the fountain built into the top of our stainless steel commode. “This is the drunk tank,” he told us. “Guys come in here drunk as hell, fucked up on all kind of shit, and nobody thinks to throw up in the toilet. Stay away from that fountain” Duly noted, we thought, and then proceeded to wait five or six fairly excruciating hours for our 8 oz. of bottled water.

Gessen is right to be unsettled by the stint in jail and right to complain about the conditions. There are plenty of discomforts that you just have to accept in such a situation and jail shouldn’t be fun, blah blah blah, etc., of course. But filthy toilets and dirty water are wrong, and obviously so. At the end, he writes that “[t]o be on the other side of the law-and-order machine in this country is awful. It is dehumanizing, and degrading, and deforming. It fills you with a helpless rage: because, once there, you can only make things worse for yourself by speaking up.” It’s a fine, straightforward note to end on. Gessen’s conclusions are obvious ones because they are basic and visceral. You feel his best points in your stomach.