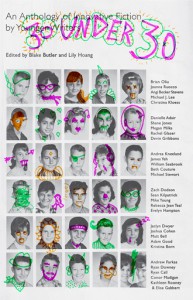 The most serious obstacle to taking the anthology 30 Under 30 as an illuminating introduction to “innovative fiction by younger writers” is that, literally, it provides no introduction. The thirty stories are presented to us without context, with no preliminary statement by the editors, Blake Butler and Lily Hoang, of the principles of selection they used,no discussion of the variety of experiment or innovation the reader will encounter, no indication of the logic, if any, behind the order of the stories’ presentation. Essentially we are asked to make sense of the anthology as we can, without the assistance of those who presumably believed it was important that an anthology of innovative fiction by writers under 30 be published in the first place.

Perhaps this is deliberate. Perhaps the editors hoped to let the stories, in effect, speak for themselves. As a gesture in support of the integrity of the selections included, this might be laudable enough, but arguably any anthology of innovative or “experimental” fiction requires some advice and direction for readers not already sympathetic with its ambitions, perhaps even intimidated by it, and it would seem even more important to provide some guidance for a book such as 30 Under 30, which in concentrating on experimental fiction by a rising cohort of writers brings up several implicit questions: How does this new cohort understand the concept of “innovation” as applied to works of fiction? How do the writers situate themselves in relation to previous innovative writers? What new avenues of exploration do these stories open up for fiction writers who might in turn be inspired by them?

An editor’s introduction that addressed these questions certainly could not answer them definitively, but an awareness that such questions naturally suggest themselves in confronting a book like 30 Under 30 surely would help the reader to read the selections attentively, in a way that rewards the effort. Most of all, it would help the writers whose work has been selected, since their fiction could be judged in its appropriate context, in relation to both the work of their predecessors in the development of self-consciously innovative fiction and the other writers included in the anthology. Instead, the reader is left to apply whatever connotations of “innovative” he/she already brings to the stories, if any, which potentially leaves some of the selections incomprehensible to some readers and does nothing remind us that connotations of “innovation” and “experiment” must remain in flux, that expectations of fiction evolve along with the form itself.

Moreover, readers who do expect that an anthology of innovative fiction will exhibit significant formal innovation will probably be disappointed with 30 Under 30. On the whole, the selections included are quite heavy on narrative, even old-fashioned linear narrative, however surreal or fantastic the events chronicled often are. Indeed, surrealism or a fantasy-inflected version of absurdism seems the dominant strategy in these selections, but it is a fabular, allegorical mode of surrealism in which the reader’s attention is consistently oriented toward story. Many of these stories have strong affinities to the work of Aimee Bender and George Saunders, who, to judge by this anthology, may be among current writers the strongest influence on the rising generation of “younger writers,” although some of the fiction in 30 Under 30 subtracts the essentially whimsical humor that characterizes Bender’s and Saunders’s work, making these surrealistic fables somewhat starker in their distortions of reality.

Another inspiration for the flights from reality that mark most of these stories seems to be various narrative forms of popular culture: movies, tv, comic books, perhaps video games. Matt Bell’s “Jumpman vs. the Ape,” for example, recapitulates King Kong by way of DC comics, its protagonist attempting to himself ascend the structure the ape is climbing in order to rescue the heroine from its clutches. The story in substance extracts the melodrama of heroism and victimization from such popular genres, but, in a move reminiscent of Groundhog Day, Bell portrays Jumpman failing in his goal of winning the girl and being compelled to repeat the quest again and again. Jaclyn Dwyer’s “Biography of a Porn Star” is an affecting if askew account of the life and work of the title character, which portrays them as decidedly unglamorous. Both of these stories take familiar narrative types and twist or invert them, a strategy that works well enough in these two stories but that surely now isn’t very “innovative,” previously employed as it was by such “postmodern” writers as Donald Barthleme and Robert Coover. The same thing might be said of Devin Gribbons’s “A Short Story,” which is an enjoyable enough metafiction (its first-level “plot” revolving around the development of a device that destroys souls) but can’t really be said to much extend the possibilities of metafiction beyond those already established by the postmodernists.

There are some stories in 30 Under 30 that do obviously experiment with form. Zach Dodson’s “I Write to You” is presented in the form of a familiar Mead Composition book (complete with cover and appropriately lined pages), but finally there’s really nothing about the substance of the story–a series of typically disconnected musings by an unidentified diarist–that really is either enhanced by the formal framework or seems to require it. Adam Good is described in the contributor’s notes as an “interdisciplinary artist” rather that a fiction writer, and while his “Guided Walks” might provoke some curiosity as a “word installation,” it doesn’t seem likely as a model for future development in fiction. The most interesting and successful of these formally unconventional stories in Todd Seabrook’s “When Robin Hood Fell With an Arrow Through His Heart,” which relates the death of Robin Hood and the demise of the Merry Men through a first-person account by one of the latter that observes no typographical rules or boundaries. But in this case the ortho/typographical idiosyncrasies have an aesthetically justified and reinforcing function, as the wandering prose and depleted verbal resources mirror the lost focus and declining powers of the Merry Men in the wake of Robin Hood’s death.

A kind of lassitude and lack of focus lingers thematically over much of this collection. In addition to the frustrations of purpose conveyed by the narratives of stories like Bell’s and Seabrook’s, many if not most of the selections portray characters who are at loose ends, disconnected from their environment, alienated and aimless. In many ways the prevailing surrealism seems a way of emphasizing such disconnections and alienation, but the loss of direction is perhaps most directly represented in the extreme fragmentation characteristic of the selected work as a whole. If narrative is emphasized in this work, it is not narrative continuously presented. But, again, fragmentation cannot really any longer be considered particularly innovative as a narrative strategy, however much it does seem appropriate to the characters, setting, and circumstances of specific stories and to the worldview that emerges from the collection in general. Michael Stewart’s “Sister,” comprised of twenty-two very brief “chapters” (in an eight-page story) is just one example of a story unfolding in fragments, although its structure particularly highlights its radical compression. The cumulative impression left by stories like this is that even though the need to tell stories remains, the possibility of telling them straight–either through the assumptions of realism or through sustained narrative exposition–seems to have been exhausted, no longer among the resources currently available to the writer of “Compression” is at work in 30 Under 30 in other ways as well, specifically in the form of “shorts” or “flash fiction.” Several of the included writers are represented by a series of such pieces, including James Yeh and Joshua Cohen. Yeh’s pieces are untypically (for this volume) realistic sketches that seem carefully composed for the “flash” form. Although it is tempting to find continuities between the five short pieces that would allow considering them as a larger whole, finally they are probably related only by the first-person narrator common to each. Cohen’s seven shorts seem even less integrated, but since Cohen is arguably the most accomplished innovative writer included in this book, and since his already published work has been of the maximalist rather than the minimalist variety, it is also tempting to wonder whether he might be experimenting with the juxtaposition of seemingly disassociated short prose pieces, or whether such pieces simply have less force when regarded separately.

While “flash fiction” is hardly a new phenomenon, it is fair to say it has yet to achieve full acceptance as a literary form separate from the “regular” short story or as a possible convergence of short fiction and prose poetry. Of the approaches to be sampled in 30 Under 30, it seems to me the most likely to continue offering writers the opportunity to extend the horizons of fiction. Simply inverting realism through surrealistic distortion and discordance (as if “realism” is still the primary enemy of innovation in fiction rather than conformity of practice more broadly) is a limited strategy that can become just as conventionalized as realism. Working toward a hybrid of fiction and poetry (which need not be restricted to short forms) would perhaps encourage writers–and readers–to focus more on language as the essential element of both.

Finally, literary “innovation” can really occur only through the emergence of form from language artfully arranged, an achievement that, putting aside the promise some of the writers included here certainly show, unfortunately is not consistently realized in this anthology.