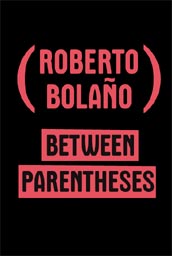 Tr. from Spanish by Natasha Wimmer

I read part of Between Parentheses in a hammock hanging over a windy lake, feeling like the only reliable thing in the world was the breathing, pulsing prose in front of me. The rest I read in a feverish, two-day whirlwind, mostly indoors, dry, but the feeling was the same.

Since critics have been vomiting all over themselves and the internet in an effort to overpraise Between Parentheses, I was a reluctant convert—but the paroxysms are uniquely merited here. Between Parentheses, a collection of essays, articles and speeches written between 1998 and Bolaño’s death in 2003, is the most exciting book I’ve read in at least a year. At times, in fact most of the time, reading it felt like a struggle, but in the best way—a struggle to keep with up with Bolaño’s dynamic voice, his challenging metaphors and broad field of references. But what made Between Parentheses so initially difficult to wade into is also what makes it so rewarding to be immersed in: it’s a complete world, full of energy and life, with its own heroes and its own set of values.

Many of the pieces collected in Between Parentheses are from a column of the same name Bolaño wrote for the Chilean newspaper Las Últimas Noticias. They’re mostly portraits of Latin American writers, anecdotes about Bolaño’s encounters with them or accounts of his experience of reading their books. The pieces are rich with global declarations and uninterpretable metaphors, sparse in excerpts and analysis (this might be the closest thing I’ve seen to Sontag’s erotics of art). Bolaño seems to have read everything ever written in Spanish, and most of what has been written in English, and to have stories about every author he reads. The impressionistic readings and accounts of authors’ lives are meant to be taken together; a work’s success, failure, general presence has a great amount to do with its author’s. Take this single paragraph from “The Rapier-Sharp Pen of Rodrigo Rey Rosa”:

Rey Rosa’s prose is methodical and judicious. He doesn’t scorn an occasional flick of the whip—or rather, the distant crack of a whip we never see—or the use of camouflage. Rather than a master of endurance, he’s a shadow, a ray of lightning shooting across the space of normality. His elegance never detracts from his precision. To read him is to learn how to write and also an invitation to the pure delight of letting onseelf be carried away by uncanny or fantastic stories. Until recently he lived in Guatemala and he didn’t have his own house: one day he would stay with his mother, another day with his sister, the rest of the time at friends’ houses. One night we talked on the phone for almost two hours: he’d just gotten back from Mali. Now he’s in India, writing a book that he doesn’t know whether he’ll finish or not. That’s how I like to imagine him: with no fixed address, fearless, checking in to cheap hotels, sitting at bus stations in the tropics or in chaotic airports with his laptop or a blue notebook into which his curiosity—his entomologist’s boldness—calmly unspools.

Bolaño will say a book is good or bad, and his highest praise, with which he’s not stingy, is to call an author courageous. There’s scarcely a piece in Between Parentheses that doesn’t contain some kind of superlative (and when he says so-and-so is, for example, one of the four best living Guatemalan novelists, you have to believe he knows exactly who the other three are). He manhandles books, authors, countries, political convictions (and the politically convicted); all of this amounts to a system of accountability in a literary world of high stakes, where there is no room for cowardice, denial or delusion, including vanity.

This compulsion toward bold judgment and unembarrassed hierarchy might tend toward arrogance, but is well balanced by Bolaño’s humor and curiosity (qualities he himself calls “the two most important components of intelligence”). Bolaño describes his first meeting with Carmen Boullosa, the Mexican writer, in a characteristically hilarious fashion: “She was definitely a beautiful woman, dark, tall, with huge eyes and hair down to her waist. I thought she was very attractive, but I also imagined that she must write like one of the many imitators of a magic realism made for the consumption of zombies.” If a current of machismo occasionally bubbles up in the course of Bolaño’s writing, and how could it not, his commitment to honesty tempers it. And his ultimate criticism here is not for the woman, whose writing he likes once he reads it, but for the zombies. Bolaño’s scorn will always be for the zombies.

In Bolaño’s world, writers are warriors and only the brave survive. Between Parentheses made me want to live there forever.