Everything I know about animal sex I learned from Isabella Rossellini. 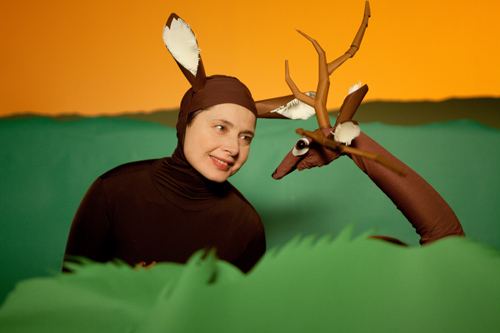 A couple of years ago, Isabella Rossellini and the Sundance Channel actually perfected the short film form with the ingenious series Green Porno. It’s an elegant and yet kind of raunchy series of two-minute clips about the mating habits of insects and other animals, from earthworms to anchovies. They’re accurate, with a perfectly digestible amount of scientific detail, and incredibly well-crafted. Rossellini plays the main roles, dressed in human-sized animal costumes, often playing both a male aggressor and the female recipient of his attentions while narrating the course of seduction and mating in lovely Italian-accented English. Of course, Rossellini also honors our homo-, bi- and even pan-sexual friends in the animal kingdom in her videos, teaching us about their kinky hijinks with obvious relish.

So the other day while I was online teaching myself Shakira shongs on the mandolin, I was overjoyed to discover that Rossellini has a new show! This one’s called Seduce Me, and it focuses on animals’ rituals of seduction. I was pretty thrilled to see the Dolphin episode, which features dolphins having blowhole sex. Sick, right? (Like awesome, not gross.) The new show even has a great episode about Noah’s Ark, in which we learn about about the scourge of heteronormativity through the ages! See, it’s even good for the kids.