For the younger reader, kind of

There’s nothing that makes me angrier than inarticulate youth. I’m talking about this kind of thing. (On second thought, he sounds kind of like Stanley Fish, right?) But anyway, anyone who’s ever worked in childcare—or been forced into the service of the young by the cruel and arbitrary bonds of biological kinship—knows how frustrating this shit can be. On the flip side, there’s very little that’s more satisfying than the dumbfounded look on a tiny child’s face when you finally shock them into silence.

By now, you’ve probably seen this gem of pseudo-juvenile literature circulating on the internet: 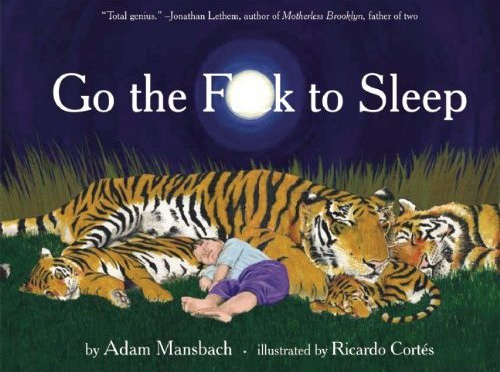 Go the Fuck to Sleep is not only an anthem for any frustrated caretaker of one of those wily tiny manipulators, but also a miracle of viral marketing. The publisher, Akashic Books, pushed the publishing date up several months (June 14th!) and upped the first printing on the basis of the book’s enormous popularity on the internet. They had to have predicted that one, right? Politically correct parents are chafing within the confines of  their carefully maintained facades of patience.

Being frequently in the company of a two-year-old myself, I got to wondering what else was out there in the way of instructional and fortifying alternative literature for youngsters. Here are a few favorites I found. 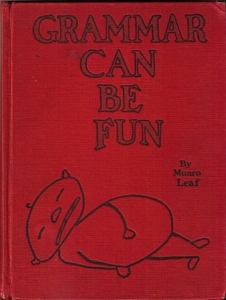 This grammar manual by the author of the pacifist propaganda piece (dear to my heart) The Story of Ferdinand is full of good warnings for kids. Pictured on the cover you see a guy named “AIN’T,” who is lying on his side because he is lazy. “Now you see why no one even likes to hear his name.” 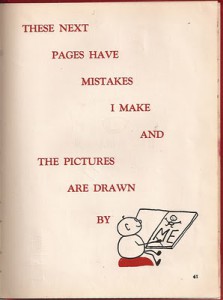 Grammar Can Be Fun even has blank pages in the back for children to practice internalizing self-criticism! Spot on, Mr. Leaf. 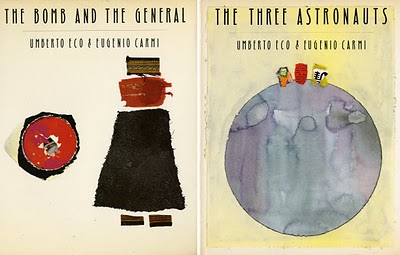 The Bomb and the General & The Three Astronauts by Umberto Eco and Eugenio Carmi, translated by William Weaver

I love a good nuclear cautionary tale as well as anyone. This is top-notch for teaching your kids not to play with splitting atoms, and for teach them what happens when you do:

When atoms are in harmony everything works fine. Life is based on this harmony. But when an atom is smashed its parts strike other atoms which then strike still more atoms, and so on. . . A terrifying explosion takes place! This is atomic death.

My only criticism of The Bomb and the General is that it places too much blame on the general. Kids should know that generals are just figureheads, and that through their own tacit complicity with the military industrial complex, they too will be culpable in any hypothetical cases of mutually assured destruction.

Eco and Carmi have a second book, just as good! In The Three Astronauts, astronauts from Russia, China and the U.S. travel to Mars, only to encounter and effectively neutralize interplanetary racism. The results, as always in this kind of situation, are awesome:

The Earthlings had learned their lesson by now: Just because two creatures are different they don’t have to be enemies. So each went over to the Martian with his hand extended. And since the Martian had six, he could shake hands with all three men at once and, at the same time, he could wave joyfully with his other hands.

By the way, Eugenio Carmi’s collage illustrations in both these books are beautiful.

And one more for the kids…

This one’s a series of collected letters supposedly written by this guy’s “inner child” (that’s the part of you that just won’t stop whining, right?) to important, often violent and amoral, figures. These are pretty real questions, like “Could you tell me what I should study to become a good hobo,” and Billy gets pretty useful answers. For instance, Billy asks the John Groom, president of the casino Caesar’s Palace in Las Vegas, which game he should play to be able to buy a speedboat. Mr. Groom replies,

Thank you for your letter. You have asked me a very difficult question, because some people who gamble lose their money instead of buying a speedboat.

And if you decide to gamble when you are old enough and can afford it, I recommend betting the pass line in the game of dice. Your money will last longer and hopefully you will have a lot of fun before the casino’s mathematical edge claims your last bet.

Wow. It doesn’t get realer than that.

If you want to see more (including Andy Warhol’s sketchy contribution to children’s literature), check out this great website.