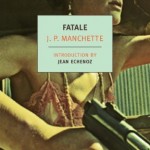 When Jean-Patrick Manchette wrote Fatale in France in the late 1970s, he was inspired by the work of an earlier generation of writers from a different continent, the American noir writers of the 1930s and 40s. Like the work of Hammett and Chandler, Manchette’s Fatale is characterized by prose picked bare as bone, by portrayals of organized crime, by depictions of the greed and lust, and by the intense individualism of its protagonist, the beautiful and murderous anti-hero Amiée. But Fatale is no copy; it is a translation of the American crime novel, and as such a rewriting, an appropriation of the form retrofitted to achieve new ends. Manchette was a politically active communist frustrated by the failure of the May 1968 revolution to enact radical social change, and a critique of rugged individualism and capitalist society is a feature that undergirds his work. The genius of Manchette’s reimagining of noir is that his political sympathies never weigh the text down, but rather subtly reveal the resonances and inclinations already inherent in the genre.

By setting Fatale in the inconspicuous town of Bléville, Manchette abandons the sprawling urban locale that is typical of noir. This switch is significant as it leads Amiée to interact not with mob bosses and drug lords, but, as she works her way into this small town’s high society, with a cast of unassuming town notables: a real estate agent, a doctor, the owners of a local factory, etc. And yet, things may not be as normal as they appear. “You’re playing into their hands […] you don’t understand anything,” a friendly policeman warns, not long before he turns on her, taking her to a dark dockland warehouse. In this satiric turn of events, he locks the door behind her and she finds herself in a room with all of them, sinisterly organized, hoping to protect themselves from blackmail by striking a deal. “I was rather expecting this,” says the deadpan Amiée, and at this moment she could be in the lair of an urban kingpin rather than amongst a collection of small town elite, suggesting that the two may not be as dissimilar as one might think.

Similarly, Manchette plays with the terse behaviorist style that is characteristic of the genre, one of distrust, which relies only on the facts of reality, on physical appearance rather than interior thought, imbuing it with a distinctly cinematic quality reminiscent of the French New Wave. But while the text is littered with strange details that would draw attention to themselves as clues or red herrings in a typical detective story, here, the recurrence of objects, the Weatherby Regency shotgun hanging on the wall, the street signs which admonish KEEP YOUR TOWN CLEAN!, take on a symbolic tone. Likewise, his approach to the dictum of character exteriority is cinematic; on the few occasions that he reveals Amiée’s thoughts, it is done by rendering them dramatically exterior, as when she stands before herself in the bathroom mirror, soliloquizing to her double, “‘Come on, my sweet,’ she repeated, ‘the crimes come last, and you have to be patient.’”

Aside from these few dramatic glimpses into her interior life, Amiée is opaque, an enigma almost always devoid of emotion, always aware, always watching, sometimes less a character than the camera in front of which things unfold. Manchette’s decision to cast a woman in his leading role has interesting consequences. She does not have to uncover the lust, greed, and corruption of society the way male private detectives do; framed by her watchful gaze, drawn by her attractive figure, they expose their dark undersides to her, like her first victim of the book, poor Roucart, who approached her “continuing to address her as ‘dear child’ and talking in an avuncular tone as his big blue eyes roved up and down her slim form.” Moments later she unloads a shotgun into his gut, and leaves him full of holes

Her quest, to single-handedly kill all of the “assholes,” to right the wrongs of society, is reminiscent of the private detective’s. But this effort is bound to fail. “You can’t kill them one at a time,” Baron Jules, the story’s mouthpiece for communist ideology, tells her, “you were bound to stop at some point.” For Manchette, it is not the struggle of one person, but the uprising of an entire class of people that will eventually overturn the society he sees as structurally broken. The detective can never truly win, and Amiée, despite all of her seeming control of the situation, races towards her demise.

The story ends strangely, uncharacteristically, with a direct address, written in all caps, which reads, “SENSUAL WOMEN, PHILOSOPHICALLY MINDED WOMEN, IT IS TO YOU THAT I ADDRESS MYSELF.” This address throws new light on the story that preceded it, dashing my hopes of recommending it for your beach bag, rendering it something other than a quick and highly entertaining read. It becomes a call to action. Manchette’s goal is certainly not for you to come to the end of his story, set it aside and take a quick dip in the cold water before returning to your friends and family for sandwiches and potato chips. Before reading, best heed the warning from Manchette’s essay on crime fiction in which he suggests that all who read, “with the simple pleasure of distraction should rather be frightened. For, to put it simply: this is why you will all die.”