The Art of Asking Your Boss for a Raise – Georges Perec 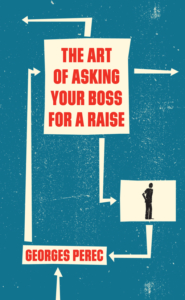 In our first installment of the Full Stop book club, we discussed the e-reader’s potential to liberate the novel from its physical bounds, but in the art and craft of approaching your head of department to submit a request for a raise, Georges Perec shows that technology can also be used as a constraint.

The challenge, to turn a flowchart into a story, came from a French computer company in 1968, when a computer was a fifty-pound calculator and France was a nation on strike. At the time, Georges Perec was a member of Oulipo, short for Ouvroir de littérature potentielle, or “Workshop for potential literature,” a group of artists and mathematicians who found inspiration in formal operations and constraints. While the rest of the country was chanting “Live without limits and enjoy without restraint,” Oulipo members were hard at work contriving new limits. Perec’s novel A Void, for example, is a lipogram, a three-hundred page mystery devoid of the letter e. More than an exercise in arm tying, however, the novel uses this absence to parody a genre while reflecting on loss and grief. So if anyone can narrate a flowchart, it’s Perec.

Proceeding in the second person, The Art of Asking Your Boss for a Raise (an abbreviated title for the US edition) takes you through the routines and subroutines of the chart, resolving dilemmas ranging from the straightforward — your boss is in his office or he is not — to the convoluted — it is the first Friday of Lent and your boss has either had fish, in which case he may have swallowed a bone, or he has had eggs, in which case they may have been expired. In either case, you should probably just wait until Monday. (Click here for an interactive version of the flowchart.)

In the hands of another author, these “circumperambulations,” which are compiled into one recursive, lowercase, eighty-page sentence, would quickly become tiring, but Perec’s knack for absurdity and circumlocution ensures that each iteration is novel and urgent. 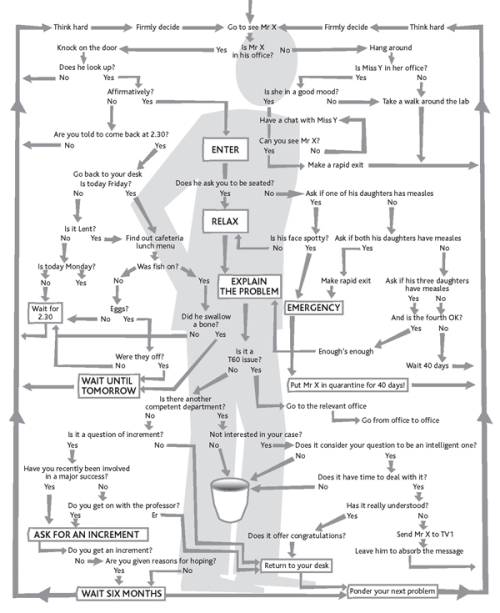 There is more to be had here than cleverness. There is friction in the flowchart, entropy in the machine, and as individual work becomes lost in a loop of Sisyphean labor and anonymous bureaucracy, “the organisation to which you feel proud to belong” becomes “the company in whose wheels you are at most a miniscule cog” becomes “the consortium which pays you a pittance while grinding away the best years of your life.” Your impotent pacing begins to resemble that of a nation stalled by its own power. And the desired outcome, that slight recalibration of wages, gets further and farther away.