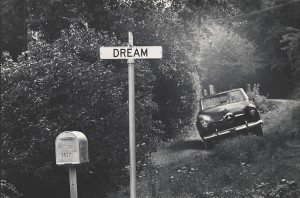 On the Paris Review Daily: Sam Stephenson, the W. Eugene Smith scholar, traces a line from Smith’s photographic oeuvre to Tennessee Williams’ famously difficult play Camino Real in homage to the feverish brilliance and tireless experimentation of Williams’ work.  Apparently March 26 was the centenary of William’s birth.  I like Stephenson’s portrait, and the roundabout way he takes to give it – he becomes interested in Williams because of a story Smith tells about Camino Real on one of his ubiquitous Jazz Loft tape recordings, describing “one of the most beautiful moments I’ve ever seen on stage,” and uses the pairing of Smith and Williams to give a sense of the artistic zeitgeist:

The way Hawke talks about Camino Real is not unlike the way I’ve spent years talking about Smith and the Jazz Loft Project: feverish, dreamlike, hot, sweaty, dirty, dilapidated, sexy, silly, electric, comic, tragic, a balancing act of tones. The play is about derelicts, misfits, outcasts, and romantic dreamers who are struggling to avoid the street cleaners (literally) of the conventional, educated world. These are the same people that were hanging out in Smith’s flower-district loft. Some of them played piano, drums, or saxophone; others helped him organize his mess.

Michael Slater talks about writing a biography of Charles Dickens on the Yale University Press blog. (They published the biography, which  you can see here.)

And on the Poetry Foundation website John Ashbery talks about translating Rimbaud’s Illuminations in an essay called “Fertile Destabilizations” (what a great title, and one that could describe Ashbery’s work, too).

The Criterion Collection is re-releasing Mike Leigh’s extraordinary 1999 film Topsy-Turvy, about Gilbert and Sullivan and the making of The Mikado, and they have a great essay that hits all the right points about the film – its subversion of period films (Leigh said that his object was “to do it with people scratching their asses and being in relationships for real”), its improvisational style, its evocation of artistic creation, its risky experimentation. It’s one of my favorite films, though it would be hard to say whether it’s my favorite Mike Leigh – his best work (Topsy-Turvy, Happy-Go-Lucky, Another Year) is the kind of stuff I worship.

You can read an excerpt of Emily Witt’s essay “That Room in Cambridge,” published in n+1, on the Poetry Foundation website. It’s about discovering the poet J.H. Prynne, has some good anecdotes about being a graduate student at Cambridge.

Maud Newton has some notes on the new Dictionary of Slang, and Mark Athitakis writes about the polarized landscape of online reviewing. These are two good blogs to follow, by the way, if you like following this sort of thing.