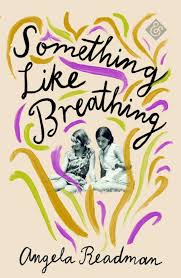 The attraction of Elena Ferrante’s Neapolitan series was in seeing her two protagonists, Lenù and Lila, almost inextricably bound up in one another’s early lives. In Angela Readman’s Something Like Breathing it is instead two girls negotiating their youth, not necessarily involved, but proximate and observant to each other with the distance becoming the captivating element of their story. Sylvie already lives on the Scottish Island before Lorrie arrives, whilst Lorrie, for reasons that aren’t initially clear, has moved to live with her family and grandfather who owns a whisky distillery. Through alternating lenses of Lorrie and Sylvie, their lives unfold.

What’s peculiar then is that it is Lorrie, the newcomer, who will undergo the honor of the rites of passage we associate with school: the discos, the acceptance into the clique of girls and the first boyfriend who has recently passed his driving test, whilst Sylvie remains the estranged outsider. Being an outsider though is something that even the popular Lorrie will undergo with those closest to her. Bunny, Sylvie’s mother, becomes a figurative presence to Lorrie and where lesser fictions could spill into a mockery of this Tupperware saleswoman (we are in the late fifties after all), read Lorrie’s admiration of her:

The plastic sofa broke wind when Sylvie flopped down, but Bunny didn’t giggle. She stood by the TV the way a salesman stands behind a new car. No one on the island had ever owned a television before Bunny Tyler, she wanted me to know.

‘It was the craziest thing. I got it with the life insurance. Women kept calling round the week it arrived. Their kids pressed their snotty noses against the window, smearing the glass to get a peek!’ She said. ‘You’re welcome over anytime, Lorrie, if there’s anything you want to see.’ I suddenly loved her.

Why is Lorrie in such admiration of Bunny? Is it because she was one of the first people to own a television set?  Or is it because she runs a tidy and orderly home where Lorrie’s mother doesn’t? What’s interesting is that whilst being incredibly conservative around ideas of expression and sexuality (Sylvie isn’t allowed to wear make-up) Bunny  was one of the first to introduce a modern and ultimately, exposing piece of technology into her home. As we watch Lorrie and Sylvie undergoing teenage tribulations, an age where we begin to expose ourselves to images and models that are not set by our parents, it’s as if the television acts  as the mediator to the images Sylvie might benefit from seeing in helping her into adulthood; something her mother Bunny cannot ultimately face, but an environment that Lorrie seems to strangely desire.

It’s perceptible, this feeling that both Lorrie and Sylvie want to see something, a different way, or any way, and the sense of being on an island becomes a conceptual as well as a physical state of being. Latent, for Lorrie and Sylvie, is this desire for absence, and not being there is potentially bound with living on the island. But from where does this absence threaten and what could banishment from this ‘island’ give them? Alice Oswald, who I thought was a spectral presence throughout this novel, wrote in ‘The Moon Addresses Her Reflection’, ‘In this floating world, in this floating world/ You are a kind of nothingness and far less fine than a tiger/ and I inhabit one of the jagged disassembled islands.’  That idea of ‘nothingness’ becomes an interesting concept, especially in relation to the permeating idea of absence, so look what happens after Lorrie watches Sylvie in the act that sets Sylvie apart from her and her school friends:

I stared at her [Sylvie] open-mouthed. It reminded me of when I came into the kitchen and caught my mother with the plumber. They’d be doing nothing but chatting, but I felt I was interrupting something. Mum would be wearing lipstick though she wasn’t going anywhere. The fawn shoes she loved on and off one heel, legs crossed, facing him, sipping coffee at the table. I saw I shouldn’t be there; whatever I’d walked in on was a moment for them alone.

It will be left to you to debate what Sylvie’s act really means and whether it really means anything more than it actually is, but the fact that it transpires into a memory of Lorrie’s in which she was there but shouldn’t have been, is telling. Rook Cutler is the man concerned – a man who is not her dad. Superficially, the links between Sylvie’s act and her mother’s are not obvious, but by the observation of Lorrie’s presence when her presence was not welcome is as though acknowledging this sense of nothingness or lack of self of being a witness to Sylvie’s act.  More notable is the observation that Rook’s name joins with the multitudinous animal images in this novel (if there was the space, I’d list them all). What these images do though, is go some way in emphasizing this feeling of what is around when we, as humans, are not

For this reason, it’s incidental to the comparisons that have been drawn with Angela Carter, and one can see why with the plethora of animal and fairy-tale symbolism that seems to lie beneath the story (I am often reminded, not just of Grimm’s Snow White, but Disney’s with its gratuitous use of animals). Because, like the animals, it’s also as though the fairytale is another layer to this world. Sexuality, I think, is rooted within this, and it’s not necessarily that it is the base of these questions, but that this community fears that it might be. Whilst Readman’s taste isn’t as baroque as Carter’s, there’s a sense that sexual knowledge comes with a sacrifice, similar to what the brides often experience in Carter’s The Bloody Chamber collection. In “The Tiger’s Bride”, the bride’s courtship and consummation results in her obsoleteness, which is a fear we know resides in this novel, and in this rigid society, like subjugated brides, or hooded girls in fairytales, Lorrie and Sylvie’s possibilities of understanding more about themselves and sexuality is entailed with some kind of warning: those that have roamed before us are still somehow within us and if it is exposed, something must give at its expense. When we are not human, when we are not conforming to this idea of ‘civilized’, the island seems to ask, what do we become? Are we just animals?

Of course, the fear in the answer to that question far overrides the reality of the problem. It does, though, create a bittersweet image that Readman allows to flourish. That is, that there are ultimately lives that can and cannot be lived in the eyes of our children and our parents, when we were or are absent, and it comes with the rather powerful idea that it might just be in our youth that we are aware or more “honest” and truthful when it comes affairs of the heart and its expression and that we do sometimes, want to live this freer, expressive life. But as these characters grow, it seems that it is this society’s job to ensure that sexuality is cornered so that it doesn’t expose things about ourselves we’d rather have hidden away: it’s no wonder Lorrie and Sylvie become scared to express it.

Amongst this, there are some really lovely images deployed throughout Something Like Breathing, and although Readman might be criticized for an overuse of similes, some of them truly glow in your mind after finishing the novel. ‘Their habits run through them like knots in wood’ was one such sentence which summarizes this sense of developmental angst of growing into the world, and the desire by those around us, for us to be, ultimately, ‘normal’. Instability is not always accommodated, but it is necessary sometimes. I’m not sure if this is an idea grounded in Western-Christian teleology, and whether it is sexual knowledge that is fundamental to it, but when Oswald further writes in ‘The Moon Addresses Her Reflection’, ‘But you and I, who know each other’s nothingness,/are lonely, like the blues beyond’ it is to see Lorrie and Sylvie’s sense of ‘nothingness’ and the threat of absence that comes with it, be a way out of this world to become that little bit freer.