I, too, have in interest in that which can be felt more than heard. You know this from jazz, as I do, but also from the way the body reacts with a low, joyful moan after placing the first bite of a good meal on your tongue. I’m talking about vibrations. In music, it works best if one imagines hearing as a straight line, with the larger number of hertz on the high end and the smaller number of hertz on the low end. Any music you hear falls along that spectrum. Higher noises—like cymbals crashing together or a car stereo with the treble turned all the way up—fall on the high end. Sounds that demand the ear’s most eager attention. Sounds that are jarring enough to get a room to snap to focus. On the extreme end of this spectrum would be some guitar feedback, wrung through a speaker. 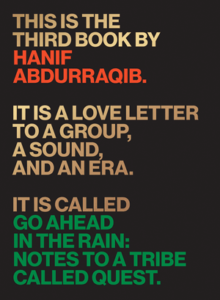 The low end is where the bass and the kick drums exist. You found a home here, as I did listening to the bass licks of Ron Carter and Stanley Clarke on good speakers and feeling my chest rattle a little bit with each slow walk of the ngers along a string. Tip, what I most love about “Jazz” is the way the Low End is not only desired but prayed to. I am wondering what space you went to when you let your chest direct your musical curiosities and allowed your ears to rest. Some might say it is too wild to strip away all those sounds and just leave a song’s backbone, but you knew what you were trying to spell out: an homage to the horns and strings—bowing to Ron Carter himself and promising not to curse too much on the record if he came in and played some bass for you.

Jive Records never knew what they had, and I know you understood this always, but it’s a good time to say it again now. They didn’t deserve the album, but you gave it to them anyway. When asked about the sophomore slump, you said, “What the fuck is that? I’m going to make The Low End Theory.” And I must say that I am impressed by how you never imagined a failure at your doorstep. Maybe the idea was that if you never left the studio after making the rst album, there was no true sophomore album—just a continuation, another arm attached to the body you were building.

It is really something to make the music talk so that the rapper doesn’t have to speak until they are ready. I love the sample as you love the sample, Tip—for how it can be extracted from the past and stretched over a sound reaching for the future. On “Check the Rhime,” there was Grover Washington Jr. again, as he was in 1975, when he put out back-to-back albums that were both critical and commercial darlings, one in the winter and one in the summer. I loved the way you stripped his tune “Hydra” down to its base elements and let it rattle around a bit along the spine of “Check the Rhime,” but not so much that it drowns out the Minnie Riperton sample. I love the deep and chunky guitar plucks from “Baby, This Love I Have.” I, too, have dug in the crates and found that record: Adventures in Paradise, the record that came after the album that made Minnie a household name. This is also a type of sophomore record, isn’t it? “Baby, This Love I Have” is a perfect album opener—a reintroduction, if you will. Maybe all the samples you chose were chosen by way of reintroduction, as you imagined your own sound being reintroduced.

Don’t you love the cover of Adventures in Paradise? Minnie, propped up on a chair with a real lion at rest beside her. The story I’ve heard goes that there were two lions at first, but the initial lion snapped at Riperton and attacked her without warning. The lion’s handler removed the first lion and brought in the second. The second, upon seeing Riperton, laid right down next to her and didn’t move. Shortly after the album cover was shot, she found out she had cancer and was given six months to live. She made it longer than that, but I’ve been thinking about how the art of the sample is also the art of breathing life into someone who doesn’t have a life anymore. And I say this and know that you are not in the business of resurrection as much as you are in the business of feeling, but I hate that Minnie Riperton was lost before I could live at the same time as she lived, and I hate that she is only known for the one song and nothing more, and I hate that I cannot hear that song and think that she sang it without knowing how much longer she was going to live.

But I suppose none of us truly know, Tip. Which is why the sample is a joy, isn’t it? The wind blows a memory of someone into a room through sound, and the architect captures that memory with their bare hands and puts it on wax. Is this, too, the low end? The feeling of something familiar that sits so deep in your chest that you have to hum it out? The James Brown on “Show Business” or the Sly Stone sample on “Jazz.” There are cookouts and Soul Train lines on this album. There are hot rooms and hot card games. I imagine the low end to be anything you could touch once but is now just a fading dream. I imagine the low end to be a bassline that rattles your teeth, too. But I also consider the low end to be the smell of someone you once loved coming back to you. Someone who sang along to Aretha, or Minnie, or Otis. Someone who loved you once and then loved nothing.

A visiting writer in the MFA program at Butler University, Hanif Abdurraqib is an acclaimed poet and cultural critic whose work has appeared in the New York Times, MTV News, and other outlets. A nominee for the Pushcart Prize, he is the author of the highly praised poetry collection The Crown Ain’t Worth Much and the essay collection They Can’t Kill Us Until They Kill Us, which was included in the Chicago Tribune’s 25 Must-Read Books list for fall 2017 and received recognition from reviewers coast-to-coast, including a starred review in Publishers Weekly. He is currently at work on They Don’t Dance No Mo’, a history of black performance in the United States.