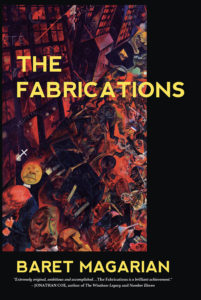 Baret Magarian’s The Fabrications is a rarity among 21st century novels — at least those that could be categorized as “literary fiction” — in that the point of view maintained throughout the novel (a novel of over 400 pages) is consistently from the third-person “omniscient” perspective—a seemingly old-fashioned strategy more characteristic of the 19th century novel and its greater emphasis on sheer storytelling than the novel as it developed in the 20th century and beyond, which became more conscious of its “art,” an important consideration of which includes narrative voice and the potential effects of point of view. After a century or more of experiment with those effects (unreliable narration, dramatic irony, “stream of consciousness,” etc.), in the 21st century most fiction has now seemed to settle on one of two entrenched practices: first-person narration, usually from the protagonist’s viewpoint, or “free indirect” narration (a term most recently popularized by the critic James Wood), a kind of compromise between third-person and first-person narrative in which the point of view is technically outside the characters in a story, but hews very closely to a particular character’s perceptual field, ostensibly allowing us access to that character’s mental processing and states of mind.

The Fabrications centers on a character to whom we do come to feel close as events unfold, although ultimately he is just one of several characters whose circumstances we follow in discrete episodes, and we are never really taken “deep” into their modes of thought or sample their emotional responses. Instead, the narrator simply reports to us in general terms about the contents of their consciousness:

That morning, while Oscar slept, Bloch sat at his typewriter, staring into space. In the end he had agreed to Oscar’s request to continue writing. While he realized that he shouldn’t really try and write any more—he was increasingly unnerved by the way in which episodes of the story seemed to be coming true—at the same time he was loathe to abandon any creative project. He was curious as to where his mind would lead him, and what further imaginative shards it might throw up.

Although we are here told that this character is “unnerved” but still “curious” — presumably accurate enough in describing his current psychological state — we do not know exactly what either of these terms precisely means in this context, or, more to the point, what it feels like to the character to be unnerved by what has happened or to anticipate “where his mind would lead him” next. This is not necessarily to criticize Magarian for overly abstract word choice; by employing the omniscient method, he is almost necessarily ruling out the kind of detailed probing of his characters’ psychological states we have perhaps come to expect in fiction, especially when, as in The Fabrications, the writer moves freely from character to character, at times shifting from one character’s perspective or situation to another’s so immediately that the effect can be almost disconcerting.

The man Bloch (Daniel Bloch) is in fact unnerved because a story he has been writing based on this friend, Oscar Babel, has started to become creepily prophetic, as the events depicted in his story actually begin to take place in Oscar’s life. When Bloch depicts the fictional Oscar’s rise to fame and influence as a guru of sorts, this is precisely what happens to the real Oscar when he is chosen by a publicist/manager/con man named Ryan Rees, who wants to use Oscar to demonstrate his own ability to hijack popular attention, ultimately to create a public phenomenon with the snap of his publicist fingers, concoct a fake reality that easily supersedes “actual,” accepted reality. Thus does Oscar Babel truly become a fictional character, in effect making Daniel Bloch’s appropriation of him complete: not only has Bloch’s version of Oscar slipped through the barrier between fiction and reality, but this version has seemingly possessed the “real” Oscar, who begins at least to carry out Rees’s plans, partially because Oscar clearly has never had a very firm sense of his own identity in the first place and, as the novel begins, he is in a particularly vulnerable state, having mostly given up on his aspirations to be an artist because he has concluded he doesn’t have the talent.

It is when Oscar Babel gets involved with Ryan Rees (after a more expansive, episodic introduction to most of the additional cast of characters) and agrees to his plot to contrive a new, entirely phony identity that what seems to be Magarian’s primary intention for the novel becomes clear. Most of the subsequent action is outrageous, and only becomes more outrageous as the narrative proceeds (including a public orgy setpiece), so that the book’s satirical effect inescapably comes to predominate over any other ambitions the author may have had for the novel—a work of metafiction, a horror fiction of sorts, even a study of psychological disintegration in its portrayal of Daniel Bloch’s ultimate descent into an existential despair so thoroughgoing it becomes pathological. We must assume that this is the dominant impression Magarian wants to leave with the reader: that his novel is a satire of the modern entertainment complex, capable as it is of manufacturing an alternative reality, a capability that becomes even more destructive when wielded by someone like Ryan Rees, who knows that his efforts help to hasten the time when public intelligence is finally extinguished for good but who doesn’t let that concern get in the way of his own self-gratification and personal aggrandizement.

Thus Magarian’s choice of point of view is less surprising, since literary satire is an art of surfaces, requiring that we not become close enough to its characters that we “understand” their behavior—the more we understand, the less likely we are to find the characters worthy objects of satire, worthy of our laughter. Indeed, the characters in satirical works are often “flat” or “two-dimensional,” terms that in this case would not be derogatory because satirical narratives more or less depend upon characters of this kind or our own laughter may be grudging or muted (or we may not find them funny at all). Of the characters in The Fabrications, certainly Ryan Rees qualifies as this sort of character: he is the public relations man writ large, the apotheosis of the slimy agent, but ultimately he is not really credible as a fully human character — although he doesn’t have to be. His role is to be the target of satire, and ultimately he is successful as a creation if the satire is credible (which it is, at least to a point). However, the portrayal of most of the other characters in the book — in addition to Oscar and Daniel Bloch, primarily Oscar’s friend, Lilliana, and Najette, who becomes his girlfriend—produces a different kind of problem. These characters are actually not so two-dimensional, in fact they mostly all emerge from this novel as fully-formed characters, even if our response to them is based largely on their speech and external actions, with only limited awareness of their internal states.

This contrast between the depiction of these core characters and the prevailing satirical direction the novel takes after Oscar joins up with Ryan Rees creates a somewhat uncertain, at times even discordant, tone. It is not always clear to what extent, for example, we are to accept Daniel Bloch’s own self-assessment of his writing career as essentially an exercise in selling out. Should we find his apparent ability, when he instead tries to write serious fiction, to literally affect reality mostly amusing in its bitter irony, or view it with the appropriate horror as its consequences—both for Oscar and for Daniel—become clear? Is Daniel Bloch a figure of fun, or is he the victim of existential terror he seems to be at the end of the novel, and therefore deserving of our sympathy? Najette also prompts a conflicting reaction. We are never sure whether she is the solution to all of Oscar’s problems if he’ll just give her space (partly the space to create her art) or whether she is an egoist who contributes to Oscar’s downfall. Perhaps she is a little of each, but this makes her a more complex figure than this novel can really sustain. Oscar himself surely provokes an ambivalent response. Much of what he does is foolish, as he puts up little or no resistance to Rees’s project of reinvention that transforms Oscar into a public figure dispensing warmed-over platitudes. But this lack of resistance is perhaps largely due to Oscar’s very shaky sense of himself, an affliction that proves deadly at the novel’s close. For this, again, we should perhaps feel pity.

Although The Fabrications tells a localized story about the intersections of several lives in London, in its intertwining of these lives the narrative develops on a rather large scale. The tonal imbalance induced by the split between its satirical scope and its more punctilious character portraits produces an even more dissonant effect than it would in a novel of more modest ambitions. This is the novel’s weakness and its strength: it leaves us feeling that Baret Magarian hasn’t quite resolved his aspirations for the book into a sufficiently unified aesthetic order, yet at the same time his novel’s conceptual untidiness is finally one of the features that makes it both appealing and memorable.

Beyond the Blurb – Daniel Green