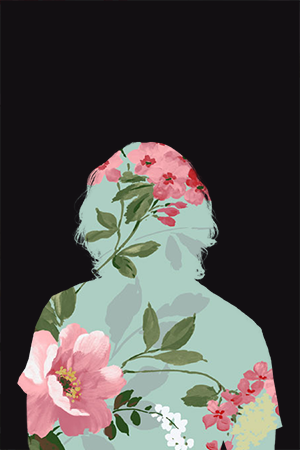 I’d never memorably seen this man’s face before or heard him sing nary a song, but when I opened the YouTube link bae sent me of Harry Styles doing carpool karaoke with Late Late Show host James Corden, I have to say that I was instantly charmed. Harry, a twenty-three-year-old British white man, was relaxed and friendly and easygoing, like it was very easy to be alive in his body, like of course it’s easy to be alive in a body; of course it would be. He seemed like a real human being, not a manufactured pop star, and the surprise of this made his humanity all the more rewarding. When he sang along to his own songs in that car, he seemed to take a genuine pleasure in doing so. Watching him, I thought: That’s how I feel when I sing my songs.

It was a Friday night and I was avoiding work deadlines, so I went down an internet hole reading about Harry and his history and his new album. He was raised in a small village in England, his father worked in finance, his parents divorced when he was seven, and he got famous after he and the other future members of the band One Direction were matched up on the set of the UK reality music competition The X Factor. I was reminded that he dated Taylor Swift. And I read that, prior to the release of his new solo album, the producers and record company people said in interviews that the record’s influences and comparable sounds include David Bowie and Queen.

In part because I am from the grocery aisle that houses lesbians, trans masc people, masc-of-center gender-non-conformers, and more, looking at Harry Styles is an interesting experience. It’s one I’ve come to recognize as what I call the Want-You-Or-Want-To-Be-You?-Problem. (I’m far from the only person to note this phenomenon, let alone experience it; choreographer Mariana Valencia calls it the lesbian dilemma and sings “do I wanna be with you, or do I wanna be you?” in her solo work Album. I’m sure many others have found language that speaks compellingly to the nuance and nature of what I’m trying to talk about here.) What I mean is, I look at Harry Styles and I feel transfixed in a way that is hard to locate. I warm to him. I want to look at more pictures of him, and maybe get to know him. I want to name all the seemingly conflicting but ultimately, and brilliantly, united details of his dapper-femme aesthetic. I like the way he talks, and the way he seems so relaxed, and the way his joke in the carpool karaoke video about getting “emotional, but in a cool way” is funny and dudely and also maybe something I would joke about.

As I went to listen to Harry’s new album, which is just called Harry Styles, I was pretty excited. “Sign of the Times,” the second track, is particularly anthemic. The power ballad’s title line — “Stop your crying, baby; it’s a sign of the times” — feels like that empathetic get-to-work nudge that 2017 requires. I have already listened to this shit on repeat, and will likely continue to do so. It seems to be a favorite of Harry’s as well: In a Rolling Stone interview published this spring, Harry expresses he had hoped to name the album after the song, but the title was shot down by producer Jeff Bhasker because “it has been used” — namely by Prince, for his first album after disbanding The Revolution. And charming though he may be, Harry is no Prince.

Sadly, the track that follows is a total skipper. It’s called “Carolina” (which one is never revealed), and its chorus is like some “Blurred Lines” action:

She’s such a good girl

She feels so good

As you move through the album, other choruses fall in line: We’ve got “Only Angel” (She’s an angel / My only angel . . .), “Sweet Creature” (Sweet creature, sweet creature . . .), and “Woman” (Woman / Woman / Woman / Woman / Woman / Woman / Woman / Woman). Now, I’ll be the first to acknowledge that part of music’s glory is that the music itself can shoulder much of the weight of meaning-making. Lyrics need not be complicated to be affecting, and the right chord resolution can seem to hold the world. What’s more, I think Harry is interested in that world. Interwoven with repetitive descriptions of women that made me sad, I found not only jams but moments of self-aware humor and tentative vulnerability.

The same basic-chorused “Woman” opens with Harry asking “Should we just search romantic comedies on Netflix and then see what we find?” On the closing track, “From the Dining Table,” Harry opens by singing, “Woke up alone in this hotel room / Played with myself, where were you? / Fell back to sleep, I got drunk by noon / I’ve never felt less cool.” I mean, I’ll definitely give points for a masturbation reference in any context. Still — even with this promise, the track devolves into a pretty straightforward “I miss you and feel mildly bitter that maybe you don’t miss me” message. The signs that Harry might be ready to offer us something deeper only make the letdown to basicness all the more harsh.

And actually, when you listen to “Sign of the Times” closely on repeat, you notice these lines:

We never learn, we been here before

Why are we always stuck and running from

What bullets have you been running from, Harry?

“Most of the stuff that hurts me about what’s going on at the moment is not politics, it’s fundamentals,” Harry tells Rolling Stone. “Equal rights. For everyone, all races, sexes, everything.” But careless songwriting like this does little for anyone, and moves quickly from boring to whack.

Anyway, I was processing all this, the enrapturing visual media and the disappointing lyrical details, and I started thinking about two things. First, I remembered what I was reading from Jack Halberstam’s The Queer Art of Failure earlier the same night that I went down the Harry rabbit hole. In a pretty heroic analysis of how Dude, Where’s My Car? depicts white man-ness, Halberstam writes that “the seemingly banal pop cultural text, with its direct connection to mass culturally shared assumptions, is far more likely to reveal the key terms and conditions of the dominant than an earnest and ‘knowing’ text,” and goes on to quote Peggy Phelan’s aphorism that “Representation . . . always conveys more than it intends.” As in, Harry, you’re a sweetheart, and that jumpsuit is [100 rainbow heart-eye-cat-face], but we see your norm-ass shit.

Then I thought about the fact that David Bowie and Freddie Mercury, and their work, were queer as fuck, in ways that were both intentional and inherent and that allow for both public and private revelation. I got to know Bowie in eighth grade because a queer person at school wrote the lyrics to “Changes,” the line about “these children that you spit on as they try to change their worlds,” in Sharpie in a bathroom stall (you couldn’t Google that shit then, so I had to go ask her about it). When I listen to “All the Young Dudes,” I feel myself, as well as some kind of brotherhood with the gay cis male experience.

I’m not sure anybody is seriously supposing that Harry Styles is “like” Bowie or Mercury, even if Harry’s sound is being compared to theirs by people who are trying to make money off said sound. Additionally, when I look at Harry’s aesthetic and presentation, it does feel genuine. He looks whole as fuck in his flowered shirts and flared jumpsuits. I feel like I see self-actualization behind those pretty eyes. But when I was ready to drop into a fuller place of knowing and feeling and seeing through the music itself — through the picture of the world his words might paint, however straightforward — I hit a wall pretty quickly.

I love the kids these days. I am a kid these days, which means the vast privileges afforded me include those that come from our predecessors having fought battles that make my life easier. I don’t think the point is that there was some better wokeness or realness in the past that people these days will never match. We are doing good work and we are going to keep doing it because there’s always still been a lot to do. To that end: Harry, if you’re listening, I’d love to be able to feel myself through you without the ache that comes from hearing you sing about imaginary good girls and (for you) bullets. Maybe you could spend some time processing those deep emotions you say you feel when you sing your songs, and then try to write more specifically about what those emotions are made of. For example, how do you actually feel about this “good” girl? What do you mean by “good”? Can you be more specific? Why do you like or dislike her, and where might those feelings of attraction or aversion be coming from? Re: bullets: Please see the Movement for Black Lives platform. If you really are concerned with “fundamentals,” you could look at the first drafts of your lyrics and be like, what am I saying about the world with these words? What vision of the present and the future am I offering? What values do these words implicitly encourage? What’s going on with my preoccupation with flowered shirts, and who worked so I could wear them, and how can I tell a story of the world through my songs such that the songs might also do a little of that work?

Thanks to Greer Dworman.

Nora Sharp is a performer and writer based in Chicago. norasharp.com

Saint Pop: Martyrdom and the Cult of Celebrity