This is an excerpt from Dispossessed Lives: Enslaved Women, Violence, and the Archive by Marisa J. Fuentes (UPenn Press, 2016). Excerpted with permission of the University of Pennsylvania Press. Click here to read Fuentes’s interview with Full Stop. 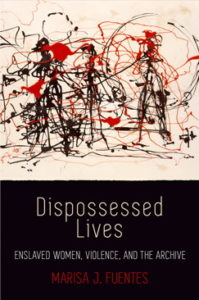 There will always be unanswerable questions from an archive that cannot fully redress the loss of historical perspectives and insights from the enslaved. I went to Barbados searching for something I would never find. Emerging empty-handed from these archives, the silence deafening, I was confronted head on with the questions my book, Dispossessed Lives, has attempted to answer. I had intended to write about the ways enslaved women labored, built communities, and experienced the confinements of urban life. I had talked extensively with historians who had done archival work in the region and gathered their tips and advice on organizing my time as I went to search for my subjects in the historical records. Yet nothing prepared me for the encounter with the paucity of material about enslaved women, the complete absence of material by enslaved women, and the intensity of archival and physical violence on enslaved women that I would struggle with over the next decade.

There were none of the voices I sought to document; no whole figures emerged that I could trace beyond a momentary mention. The women I did find were battered, beaten, executed, and overtly sexualized. They were listed on estate inventories only as Phoebe, Mimba, or “Broken Back Betty,” and sometimes only as “negroe”— stripped bare of all that was meaningful in their lives. Bequeathed in wills and deeds, or counted and dying on slave ships, they could not tell me about these conditions or what they thought, how they loved, or from where they came. The permanent loss of this knowledge was harrowing. Looking back now, I understand how both naïve and hopeful I was going into this project. I believed I would find “that one source” no one else had yet discovered. I would be able to tell a story from the standpoints and thoughts of the women about whom I wished to write. I would discover a document that revealed the inner everyday lives of the enslaved in plain language that I could simply translate. I encountered images of Rachael Pringle Polgreen across the island made into dolls, posters, and postcards — her caricature (re)commodified for twenty-first-century tourists. I scoured a century of execution compensation records and read about Molly and numbers of other women who had been executed, and I found the conditions of their lives buried with them. There was nothing about age, family life, or the circumstances leading to their convictions. I could not prove, at the time, what I felt to be true: the system of slavery assumed enslaved people were criminals when they were instead victims of an impossible legal structure. I discovered a court case where an enslaved boy dressed in women’s clothes with a hidden dagger walked across town at night, dragged into the affairs of white Barbadians, yet silenced within the frame of law. Not even his name was mentioned. The few surviving newspapers contained brief advertisements of runaway slaves; one of them was Jane, conjured by the variety of scars on her body. Her owner mentioned no relatives or considered the life she left behind when she was captured and brought across the Atlantic.

I was drawn to each of these people by the loss of their histories and my unfulfillable desire to recuperate something about them. I found only their archival mention, fragment, or image, and knew something must be said. At the time of their discovery I did not yet know what they embodied, only that they represented a range of theoretical concerns I began to ponder because of their incomplete and violated nature. My questions shaped the way I would seek to bring these women into history, as well as a way to bring the discipline of history into a more transparent and reflexive frame. It was the context and the manner in which enslaved women were silenced that provoked my focus on addressing this process of erasure and the violence of their physical, historical, and archival condition.

After twenty-two months of archival research in Barbados, England, and South Carolina, I returned to the United States with a determination to address the issue and causes of archival silence. Through the life of this project I worked within a historical disciplinary structure that required more sources to make the project “viable” and within the logic of historical methodology, which purported that a history of silence could not be written when there was not enough material to fill an article, let alone a book. I resolutely thought about and challenged the process from which these disciplining rules and (desires) emanated. The women in the book—Jane, Agatha, Rachael, Joanna, Molly, and the many more whose names did not survive — required more than the limits a single discipline allowed, and I spent the next several years developing methodological pathways into their lives. These included explorations about their historical or historiographical representations, thinking through the theoretical significance of colonial power in the realm of law and punishment, and changing the archival language and gaze to reflect the gaze and perspective of the women in the fragments.

History is produced from what the archive offers. It is the historian’s job to substantiate all the pieces with more archival evidence, context, and historiography and put them together into a coherent narrative form. The challenge this book has confronted is to write a history about what an archive does not offer. My theoretical questions guided me to move toward particular methodologies that would assist me in explicating the limits and possibilities of enslaved women’s historical subjectivities. Molly, for example, symbolizes both the violence of slavery on bodies and the violence of the laws that prevent the enslaved from claims of humanity and innocence. Rachael Pringle Polgreen’s metanarrative demonstrates the troubling and silencing nature of historical production — it shows the way her rehearsed narrative obscures her perpetuation of slavery’s violence. Jane and the unnamed women in the final chapter illuminate the manner in which mutilation—physical and symbolic — conditioned their historicity leading to questions about the impossibility of recovery. The nature of the archive from which they emerge requires this effort. We cannot redeem or rescue them, but we can reconsider their pain.

This project has not been without risk for me, and perhaps for my readers as well. It has not hewn to those historical practices that require a vast empirical base from which to generalize. There is political risk in presenting seemingly “defeated” and disfigured subjects and of presenting “too much death” and violence. And, there is risk in the archival encounter. Confronting sources that show only terror and violence are a danger to the researcher who sees her own ancestors in these accounts. To sit with these sources requires the capacity to hold and inhabit deep wells of pain and horror. One must persist for years in this “mortuary” of records to bring otherwise invisible lives to historical representation in a way that challenges the reproduction of invisibility and commodification. This process of historicization demands strategies to manage the emotional response one has to such brutality in order to persist with these subjects — to be willing to take up and sit with this aspect of human degradation and to find meaning. When writing Chapter 5 I spent weeks reading hundreds of accounts of dismembered, burned, and whipped enslaved women and men. There were many times I had to put the documents down and walk away. But I knew I had to gather myself and return to them. I have by now spent years absorbing the brutalizations inflicted on people of African descent and witnessing the process by which —“humans [cease] to be.”To spend time in this temporal and geographical space is to risk emotional strength. It obliterates the possibility of objectivity. It is an exercise in endurance.

When I teach courses in early modern Caribbean history and slavery, I assign my students a final paper requiring them to analyze a primary source from the era and region we have covered over the semester. Several class days are spent practicing with different documents, some of which I used for this book. We read wills left by women of color, compare the Code Noir to the Barbados Slave Acts, and read the Haitian and American declarations of independence together to analyze language and the meanings of freedom. The students’ enthusiasm turns into agony and anxiety when they have to choose their own source to analyze for their final assignment. They have many questions about where to look, what constitutes an appropriate source, and what is the required number of secondary sources they will need to contextualize their document. What is most striking however, is the repeated question that sometimes rises into complaint: how do I find a source written by an enslaved person or from their perspective? Aside from the few surviving slave narratives there are some students who wish to write about the gendered violence particular to the experience of enslaved women, or routine and everyday life of slavery but find the records at best empty of this concern; at worst there are documents in which slave owners blame the women for their “insatiable desires” or reduce enslaved people to their price or physical debility. At the heart of my students’ question is the realization of how difficult it is to narrate from a place of silence. It then dawns on them that their assignment is as much about working with what is there as with what is not. This is the same concern I had struggled with when I began this project over a decade ago.

Dispossessed Lives insists that historical studies of the black Atlantic inform the ways in which race, gender, and sexuality continue to shape the lives of African-descended people worldwide. It is a history of how people of African descent became disposable, when black lives were objectified and thus vulnerable to the caprice, lusts, and economic desires of colonial authorities. It documents the strategies and structures that made black Atlantic lives subject to violence of thought and action. It offers material to reflect on the stakes of resistance in such systems and the reproduction of raced and gendered configurations of vulnerability. It begins to mark the way that the archive and history have erased black bodies and how the legacies of slavery — the racialized sexism and the legal, socioeconomic, and physical violence against people of African descent—manifest in the violence we continue to confront. It is a gesture toward a reckoning of our own time. It is a history of our present.