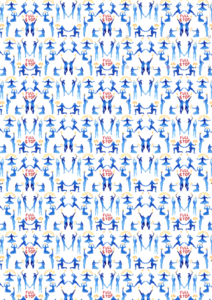 This piece serves as the introduction to the very first issue of the Full Stop Reviews Supplement. The issue includes some of our favorite reviews of 2016, as well as a conversation between Amina Cain and Hannah Klein about Claire-Louise Bennett’s Pond. It is available to download, for an optional donation, here.

In an early chapter of Claire-Louise Bennett’s debut novel Pond, the unnamed narrator rages silently against a sign in front of a pond which reads “pond.” More than just a comical redundancy, this label is for her exemplary of a much larger problem: the way language, improperly used, can alienate one from their experience of the world. She imagines coming upon such a sign as a child:

Oh I’d be hopping. That sort of moronic busy-bodying happens with such regaling regularity throughout childhood of course and it never ceases to be utterly vexing. One sets off to investigate you see, to develop the facility to really notice things so that over time, and with enough practice, one becomes attuned to the earth’s embedded logos and can experience the enriching joy of moving about in deep and direct accordance with things. Yet invariably this vital process is abruptly thwarted by an idiotic overlay of literal designations and inane alerts so that the whole terrain is obscured and inaccessible until eventually it is all quite formidable. As if the earth were a colossal and elaborate deathtrap. How will I ever make myself at home here if there are always these meddlesome scaremongering signs everywhere I go.

“How will I ever make myself at home here,” is a question that haunts Bennett’s novel, a quietly intense record of one woman’s attempts to make a home for herself despite her sense of uncanny alienation from land, body, and self – the Freudian term Unheimlich, often translated as uncanny, of course quite literally means un-homely. What sort of life is possible when we are caught between the ideal of unity, of attunement to “the earth’s embedded logos,” and those “meddlesome scaremongering signs” which threaten to un-home us? Ultimately, Pond does not offer its narrator, or its readers, a home outside of language (how could it?). Instead, it traces the way language is always embedded in experience and experience in language, and attempts to realize a form that captures this irresolvable supplementary relationship.

At the same time that it evokes these larger themes, the narrator’s encounter with the “pond” sign could be read as an allegory of literary criticism. A lapsed academic, Bennett’s narrator describes her style of reading as too unsystematic, too personal for academia (one might add, too “feminine”). But in positing the idiosyncratic joys and troubles of reading, she points towards a literary criticism that acknowledges the vexed and inevitably supplementary relationships between language and experience, literature and life, art and criticism. The sign, that “idiotic overlay of literal designations and inane alerts,” evokes the exegeses and judgments that accrue around works of literature.

If such criticism threatens to prevent the reader from establishing a “deep and direct accordance” with the work, Bennett models an alternative. In a chapter where Bennett’s narrator finds herself panicked by the tiny catastrophe of a broken stove, for example, she turns to a dystopian novel for sustenance. In this novel, a woman counts out the last of her remaining matches, a mundane activity made extraordinary by the fact that she is the last remaining human on earth. By showing her narrator in the process of applying this fantasy to her own life, Bennett resituates the act of reading within the everyday. But the comparison between a broken stove and a final match, comic in its hyperbole, does more than make the narrator at home in private anxieties. It is the productive disjunctions that are significant – the movement between the everyday and the existential, the personal and the elemental, the textual fact and its form rendered through memory. In highlighting such tensions, Bennett illustrates that in the encounter with literature, “the desire to come apart irrevocably will always be as strong as, if not stronger than, the drive to establish oneself.”

Addressing these questions about the supplementary relationship between language and life, literature and criticism has been at the heart of our project at Full Stop. Responding to a decade that has seen the collapse of many once-vital newspaper literary sections and the rapid expansion of online literary culture, the Full Stop Reviews Supplement continues this work into our second half-decade of existence by paying homage to and seeking to reimagine the literary review in the digital age. Published twice a year, each issue will feature some of the best reviews of debuts, works in translation, and books published by small presses from our website, alongside a forum or special project relating to contemporary literature, criticism, and culture. Collectively, they will document attempts to think-through-practice around questions such as: What is the function of the book review today and what is its relationship to publicity on the one hand and academic literary criticism on the other? How are new modes of publishing transforming what we read and how we respond to it? And how can experiments in the reflective act of book reviewing serve as a site of intersection between the personal and the political? In the process, we hope to continue our support of the work of critics, small presses and the aesthetically, linguistically, and socially marginalized communities of writers they represent.

In addition to over thirty reviews published in Full Stop during 2016, our first issue features an email conversation about Pond by writer/critic/artists Amina Cain and Hannah Klein. The tension between the intimate form of conversation and the highly mediated nature of email proves the perfect stylistic companion for a novel working through anxieties of absence and presence. Over the course of their conversation, Cain and Klein’s attention to detail and sensuousness mirrors that of Pond beautifully as they discuss Bennett’s perfect images and the various kinds of gazes it describes and elicits, “homemaking as a form of dreaming and listening,” and fantasy as a necessary strategy of survival.

Get the rest of the supplement here.