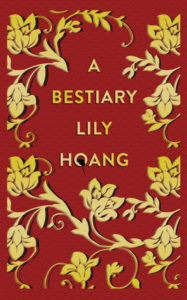 In fictional accounts of the second-generation experience, we often encounter uncompromising parents, the perils of perfectionism, and children plagued by a shortage of self-worth. Lily Hoang’s collection of essays, A Bestiary, is no exception to any of these commonplaces. Her unforgiving self-analysis betrays certain unshakeable insecurities: her failure to have become a model Asian-American daughter, her inadequacy as a friend, and her submissiveness in her romantic relationships to opportunistic men. Hoang’s inquiry into various narratives — whether her own, of folklore, and of fairy tales — is ultimately an endless effort at self-reconciliation.

These linked essays most closely resemble sessions of confession painfully eked out through much self-flagellation. The series of ruminations are a geography of particular obsessions. Hoang follows multiple arcs, often abutting rewritten fairy tales with scenes of daily life, impressions, abbreviated dialogue, and revelatory details. Her singular, impressionistic mode of expression uncoils multiple themes with poetic economy. In the essay “On the Geography of Friendship,” she writes of how friendship often begins to fail when tested by the realities of geographic distance:

I am selfish because I would drive 800 miles every month to see Harold for a weekend, but I can’t do the same for the funeral of an old friend.

Friendship saunters off when you turn away.

These telegraphic utterances, variably authoritative, aphoristic, plaintive, and self-justifying, depict a woman struggling with the failure of her reality to correspond to an ideal of self-sufficiency and domestic bliss. The text is unabashedly autobiographical: Hoang is a professor of writing at an unnamed college. She is the daughter of ailing parents. She has become unmoored by the death of an older sister remembered for both her superior beauty and compulsive behavior. There is much bottomless pining for an alternate life: “If I hadn’t failed my parents, I would be a medical doctor. I imagine this Other Lily, wonder if she’d be my size or trimmer or fatter, if she’d have bad skin like me, a head full of white hair like me, if she’d do something as shameful as smoke cigarettes. I imagine her friends. Would they look like mine? Does she dress like me?” She possesses a keen sense of irony, often deployed in the registers of bitterness or self-deprecation: “Chris forced me to be more responsible, more adult — to take care of him.” She is sometimes struck by moments of lucidity, when her anxiety is replaced by a sort of genuine wonder at being alive: “Face the facts: there is no Other Lily, and I’m pretty satisfied with my life.”

Hoang, though typically querulous and self-obsessed, writes with a compassionate eye when describing her mother’s endurance of the debilitation wrought by age, arthritis, and chemotherapy: “She shows me the only way she can hold a pen. It’s awkward and unnatural. She has coped with this pain like it’s supposed to be this way.” The idealism of the notion of suffering as virtue is pierced with a brutal presentation of its physical realities. Hoang does not go after her mother for her self-destructiveness. Her response is one of grudging acceptance. She sees her mother and herself as victims of the Vietnamese cult of suffering. She faults the culture at large for its encouragement of this thinking through its prizing of endurance as a form of beauty.

Hoang describes the penetration of these values with a certain amount of fatalism: “I am safe because I belong to the most successful minority group. Our men are emasculated and our women praise their endurance of pain. We are a safe bunch, just shooting for assimilation and acceptance. I hate this about myself as much as I am proud of my success.” The last part about hating herself is actually a bit disingenuous. The Asianness she despises also provides her a form of security. But elsewhere, she suppresses the fear that her success is more a result of the exoticism of her background than of any artistic merit. There, culture robs her or at the very least, dulls the glory of success. But it is more freeing than binding, more a reprieve for her solitude than strangulating prescriptions for behavior.

Of course, the only logical position one can take with one’s own culture is one of ambivalence. But what Hoang is doing here is slyly deflecting blame from the individual towards uncontrollable cultural forces. For Hoang, the second-generation child’s coming of age is a slow disillusionment with their parents’ native culture. It all too easily becomes something exploited or appropriated. Asianness becomes a convenience, a sort of detachable part of the self, a part only assumed when her sense of inadequacy becomes intolerable.

The collection’s title is a wink at the centrality of myth, fairy tale, and legend to Hoang’s strategy in narration — a feminist rereading and interrogation of canonized fables. “On Measurement” suggests that the modern definition of time has developed from certain Western traditions at the expense of other approaches. The tale of Prince Charming and Sleeping Beauty is revisited as a story of reawakening and then questioned for its implication that a woman’s rebirth might have required male intervention: “When Charming arrives, she is gone. She has already been saved, a season ago. Leaves gather on branches, resolute.” It is easy to dream of independence and the resistance of domesticity but in reality, the puzzle of female dependency remains irresoluble. Her advances toward freedom always falter — the source of which remains the question toward and from which these essays both drift and recoil.

Facetiously, Hoang writes of her current ruinous relationship, one occasioned by infidelities on both sides: “I justify seeing him because I like our story.” Always there is this love of the tidy narrative with its happy coincidences, its aligned orbits, and easy categorization of victors and losers. Of course, the conditions of life forbid such rosiness. Though one supposes that mere pining should do no harm, there is a point when all this measuring up becomes masochistic, when her life is at risk of becoming a sort of eulogy for another, an interminable mourning for what could have happened, for the life not chosen.

On the surface, this is a haphazard approach to narrative construction without much linear logic. Arcs are often abruptly broken only to be resumed in later essays. Doubts over the writing process frequently intrude: “The people in my every day life who don’t make it into these essays: why? What induces inclusion?” Uncertainty over the project and a dithering between truth-telling and dissembling are constants: “This essay already feels too honest, I’ll publish it anyway: I am not worth a nickel of shame.” There is a consistent quality of jaggedness, as when associated memories are conjured through the most incidental of connections: “When I peel pomegranates, tenderness for my ex-husband strikes me like the release of venom.”

These are essays in the purest sense: untrammeled thought in full flight. They are sometimes frustratingly discursive with unfinished threads, while some of the rewritten myths remain either tangential or excessive. But the work is still a purposeful illumination of a woman in crisis on multiple fronts, a woman seeking, if not resolution, then at the very least, some sense of equilibrium.