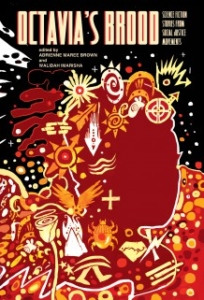 Social justice activists, Walidah Imarisha writes in her introduction to Octavia’s Brood, are practitioners of speculative fiction. In working toward an unfamiliar better world, they are investing not in what we know, but in what could someday be. Science fiction, then, is a tool well suited to the activist, who can use its traditional narrative and aesthetic forms not only to explore new ways of thinking and being, but to encourage others to question their reliance on strategic frameworks that take into account only those conditions that do and have existed, and to focus instead on those we have yet to create.

In Octavia’s Brood, more than twenty authors contribute to this “visionary fiction” (a term Imarisha uses to distinguish these works from science fiction that uphold and reify traditional hierarchies and social structures). The authors include artists, teachers, community organizers, LeVar Burton and Mumia Abu-Jamal, and their themes are as diverse as they are. They engage issues related to immigration, gentrification, racism, the environment, and more. Many seem to speak to one of two underlying questions: what if what we’ve been conditioned to see as our weaknesses were in fact our greatest strengths? How do we deal effectively with conflict without contributing to an ongoing cycle of violence?

Of course, the tone of each piece varies wildly. The very first story in the collection, “Revolution Shuffle” by Bao Phi, takes place in an America that forces people of color and political dissidents into work camps where they are responsible for maintaining large, noisy machines that attract zombies away from wealthy white plague survivors on the coasts. In this case, the only course of action that might lead to revolution is armed struggle, and though not hopeless, the future envisioned by Bao Phi is far from a utopia.

In “Hollow” by Mia Mingus, there is lingering anxiety about the security of social progress. A society of people known as ‘disabled’ on Earth live free from stigma on another planet where their surroundings center their strengths and they thrive without judgement. But is separatism enough to keep the “Perfects” from trying to destroy what they have worked so hard for, a world in which so-called imperfection is happiness?

On the other end of the spectrum, some of the stories invite us to imagine worlds that are nothing but positive and spiritually fulfilling, built on sentimentality. In “Evidence” by Alexis Pauline Gumbs, conflict is a thing of the past. Instead,

Everybody eats. Everybody knows how to grow agriculturally, spiritually, physically and intellectually. No one owns anything or anybody or even uses anything like a tool . . . It is on everyone’s mind and heart how to best support the genius that surrounds us all. How to shepherd each of us into the brilliance we come from even though our experience breaking each other apart through capitalism has left much healing to be done . . . Everybody is always learning how to grow.

Though a kind of mystical bind exists in many of the stories, it is not always to such feel-good effect. In “The River” by adrienne maree brown, the natural relationship between native citizens of Detroit and the very land — and water — mass of the city results in the expulsion of the city’s gentrifiers through pointedly targeted tidal phenomena.

While some of the stories in Octavia’s Brood ask us to indulge ourselves by imagining the best and most inspiring, peaceful futures possible for ourselves and for each other, others insist that progress is a difficult and downright dirty process. As much as they beg conversation from the reader, they are too in conversation with each other about how best to achieve the highest successes for the largest percentage of the downtrodden. However they may or may not contradict each other, they are bound together in their resistance to marginalization, exploitation, and destruction.

In the short story “The Book of Martha” by Octavia Butler (the highly influential science fiction writer to whom this collection is an homage), God asks a woman to change one thing about the world that will improve the lot of humanity. After much debate, she decides to give every person total satisfaction, but only in dreams through sleep. Of this story, Butler writes in the second edition of Blood Child and Other Stories that “It seems inevitable that my utopia would be someone else’s hell. So, of course, I have God demand of poor Martha that she come up with a utopia that would work. And where else could it work but in everyone’s private, individual dreams?”

The strength of this collection is precisely that it’s not a roadmap to utopia. Its goal is not to offer up even a glimpse of perfection, but to give voice to those dreams that have thus far been stifled, ignored, or otherwise victimized through erasure. Only once they’ve been expressed can solidarity be practiced truthfully, and resistance narratives can become strategies that are as effective at building new worlds as they are dismantling the old.

Emily Oppenheimer spends a lot of time with her band Total Slacker, but when it’s not a bass guitar in her hands it’s a book. Her favorite place to read is the floor of her bedroom with her pet bunny, Taco, in her lap.