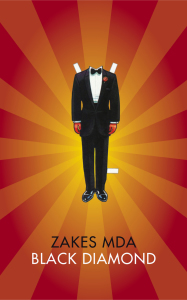 Don is moving up in the world; he was a freedom fighter, and now he’s going to be a black diamond. At least, that’s what his girlfriend Tumi thinks. Set in post-Apartheid South Africa, Zakes Mda’s latest novel, Black Diamond, references a nickname for the country’s rising black elite not coal. Although its social commentary is engaging, the novel’s predictable love plot of Don’s shift from controlling ex-supermodel Tumi to Kristin, the mousy magistrate turned accepting blond bombshell, is cliché, at best.

Black Diamond’s plot acts as the mannequin to hold up the relationships among race, class, and capitalism in the new South Africa that Mda boldly unpacks. Unlike many Apartheid novels that stick to one location or group, Black Diamond depicts a South Africa where every group is present and no powerful white man is in sight. Even the Africaner petty criminals, Stevo and Shortie Visagie, bow down to their rifle-touting Ma. His characters remember Apartheid and often find themselves navigating the classism that grows from a burst of new investors and the racism that lingers despite sanctioned equality. Mda processes many stereotypes by bringing them into the discussions of his characters, as when Kristin expresses her surprise that Don, a black man, likes cats. Mda questions how much the world being created by the new black entrepreneurs is better than what existed before or how much it is simply a new face of the same power. Repeatedly, we see the income disparities that still exist: homeless people, blind beggars, prostitutes, and servants (euphemistically called “helpers” by their uncomfortable black employers) figure frequently at the periphery for the now-affluent, though Soweto-raised Don. Better to be on the right side of capitalism, as Tumi says.

When Don becomes the live-in bodyguard for Kristin, a magistrate threatened by the Visagie brothers, he starts to see himself through her eyes. She is not impressed by his sleek leather sneakers, but by his fine cooking. Don begins to question the importance of lemon Versace suits and Saabs, becoming less the garish elbow-candy for Tumi to dress up and more the unlabeled, restrained CEO he was always meant to be. Meanwhile, the women, well, it seems the best that the novel has to say about them is that they have great bodies. Kristin’s unnamed mongrel house cat is portrayed with more spitfire and sense of self than her owner, and Tumi seems like little more than a yelling version of Don’s precious Persian Fluffy. More vehicles than characters, these women only serve to enable Don’s development and arousal. Every woman in the novel is a caricature, driven by an urge to dominate and a core of helplessness. Like many recent novels, Black Diamond seems to have decided that any story goes down better with fishnets.

Mda’s frequent in-text definitions and clarifications demonstrate that he is aware that he writes for an audience beyond his own language and cultural community. Although I appreciated the effort to teach a few phrases or introduce his audience to local dishes, the explanations of them were rarely woven into the story and felt more like footnotes inserted into the text. What could have been left to context or a glossary instead became a few out-of-place clauses in every chapter.

Otherwise, Mda’s writing is sharp and quick moving. With ample dialogue and a fair dose of action both in cars and in bed, the novel would translate into a stellar film. It’s filled with vivid images of beautiful people and cigar clubs contrasting the occasional Sunday visit home to Soweto.

Perhaps the most satisfying character of the novel (other than the mongrel cat) is Shortie, the undervalued younger brother of criminal-mastermind-wannabe Stevo Visagie. Although he doesn’t hesitate to try killing the magistrate, Shortie just can’t bring himself to boil her cat (not that the cat will let him). In Shortie, we get a glimpse of someone figuring out how to make decisions outside the narrative in which he grew up. When Don declares that he will no longer be a “kept” man, he also speaks to these entrapping social scripts. In the end, it is this underlying question of what narratives exist about us and how we can escape or rewrite them that make the novel interesting, even as it uses profoundly limited representations of women to provide this narrative possibility for its male characters.

The Weather Changed, Summer Came and So On – Pedro Carmona-Alvarez

We Are the Birds of the Coming Storm – Lola Lafon