We Are the Birds of the Coming Storm – Lola Lafon 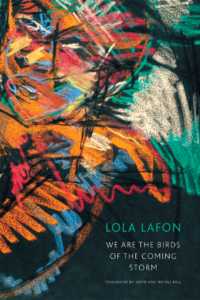 Tr. by David and Nicole Ball

I struggled, quite a bit, writing this review. Reviewing books, while easy in certain ways — you have certain aspects of form to follow, there are certain features of books that cannot go unremarked: one must write about character, about language, about technique — and really a rather simple process (much simpler, it would seem, than writing books), can also be a pain. Especially, frustratingly enough, when the book is really good. This is not a particularly original thought, and is steeped in ideas about authenticity and art, the autonomy of the literary, poetry and the unique, the heresy of the paraphrase, and so on. Reviewing books, in short, can feel like a sort of disenchantment.

Though this kind of feeling certainly contributed to my difficulty in writing a review of French writer and composer Lola Lafon’s third and latest novel, We Are the Birds of the Coming Storm, there were two other factors, as well. The first will also be fairly familiar to readers of modern and contemporary fiction: Lafon’s is a novel that asks, in certain ways, not to be reviewed. It speaks to its reader about the literary, the poetic, the authentic, in a way that simultaneously disparages those ideas and carefully nurtures them. It quotes William Forsythe and Michel Foucault, Dickinson and Baudelaire. A review of a novel like this runs the risk of becoming the object of ridicule of that which it purports to investigate. It is a formally nuanced novel that could suffer greatly from the unsubtle descriptiveness that the simple form of the book review occasionally tends towards.

The second source of difficulty was for me, though, the more intense of the two, and, though it is maybe simpler, it is sort of harder to articulate. We Are the Birds of the Coming Storm is a novel that discusses intensely issues of sexualized violence, particularly violence by men against women. Two of the central characters in the text have been sexually assaulted. Much of the novel depicts the struggle to represent — in language and more generally — both the assaults themselves and the thoughts of the women who were assaulted. At the same time, the book asserts, I believe, that sexualized violence is not something that cannot be thought about or should not be thought about or represented. Nor does it suggest that only certain groups have the ability to think — or write — about sexualized violence. Instead, the text intimates that the discourse surrounding sexualized violence that already exists in many places is not only inadequate, but also harmful, and contributes to what one character calls “the Democracy of Rape.”

Simply put, I had a hard time figuring out, as a man, how to write about the experiences of the women in this book in the traditionally detached, authoritarian tenor of the book reviewer. What is the best way to write about a text that implicates its reader — particularly, in this case, the cis-gender male reader — in the problems that it presents? How to write about a book that opposes so deeply, clearly, and convincingly the dominant vocabulary that I have used in the past to think and write about sexualized violence, a vocabulary that is so tied to my subject position and privilege as a cis-gender male?

These were the thoughts that pushed and pulled at me as I tried and tried to write this review. Though this could read as a sort of preamble or introduction, an apologia or a sort of rhetorical floatation device, I would prefer if it were more generously taken as a kind of peeling back, the exposure of an unsteady foundation, an affirmation of positive unease. I still am not sure how to write this review, but I think it is worth a try.

We Are The Birds of the Coming Storm marks Lafon’s debut in English, translated beautifully by David and Nicole Ball. The novel concerns itself with radicalism and resistance in contemporary France, rape culture, dance, authentic expression, and the follies and farce of liberalism. Broken up into three longish parts, which are further split into shorter chapters — sometimes titled, sometimes not — We Are the Birds manages to approach these hefty topics with an intense seriousness and focus, as well as a nuanced form of self-awareness. At once packed with dense ideas and delicate plotting, the novel begins just after a young woman, Émile, falls into a coma, and the remainder of the novel takes the form of a “diary of [her] unlived days” as composed by her best friend, the narrator, who goes (mostly) unnamed. Émile has just suffered some kind of heart attack — a “sudden death,” the narrator comes to call it — and the narrator decides to write down her thoughts so that her closest friend, if and when she wakes up, can regain the time lost lying supine in a hospital bed. The result is a remarkably complete-feeling portrait of a friendship written in a lyrical, often associative style:

And I haven’t been in the city for so long that is filled with you and you only. We’ve walked down all these streets and burst out laughing as we pointed to those postcards with their ridiculously overdone mauve skies, in the bookstore that’s open till midnight, and that cinema where the cashier always makes the same joke — no I’m not giving you back your change thank you mademoiselle and we’d give him a nice smile, you have to support that cinema, it only shows old horror films we love — and that huge tree bending along the riverbank beneath a loft with oversized windows and a hundred times over we’ve pictured its occupants, they’re obviously unpleasant, that night bus that takes us from Paris to the station near the Island, everything, everything is yours, with you.

The first section of the novel sticks closely to this formula, a kind of confession, a love letter to a lost friend, an attempt at recuperation. The narrator, we learn, is a ballet dancer, born in Romania, while Émile is French-born and a kind of radical social worker. The two “backed into” their friendship, after meeting at a support group for survivors of sexual assault in Paris. The friendship grows slowly, beginning as it does in shared suffering, as the two learn “the legal categories of that moment in your life . . . their date, setting and schedule . . . the comments of the policemen you go to see one September night.”

The overwhelming mood of melancholy in which the book begins soon morphs into a more alarming feeling of immanent disaster. In a book that begins with the sudden death of a best friend, it takes a special writer to maintain this sense of constantly elevating stakes: when the epigraph to the second section of the book announces that it is time to “move on from nausea to vomiting,” (a quote taken from the Bolivian feminist group Mujeres Creando) I thought, how could what I have just read been simply nausea.

In the latter half of the book, the relationship between the narrator and Émile takes a backseat to the development of that between the narrator and another woman, affectionately — and, later, proudly — called “The Little Girl at the End of the Lane.” After the narrator and the Little Girl meet, the two quickly grow close, the stunningly intelligent, infinitely caring Little Girl becoming, for the narrator, “my cloak, my brass knuckles and also a sweet home.” It is also she who first gives a name to our narrator: Voltairine, after Voltairine de Cleyre, a 19th century American poet, anarchist, feminist, and organizer. The Little Girl bestows this name upon the narrator because she apparently resembles her, but the connection to anarchic politics hints at the radical potential that the three friends come to find in names and naming. There is the sense in We Are the Birds that names are dangerous things: not only the names of people, but also of states of being. To be declared “insane,” to become a “victim” or “aggressor,” these are small names for complex things, strings with which we bundle up the untidy and unsystematic and make it understandable — or perhaps more importantly representable. And if, following Althusser, names are one of the key ways in which we find ourselves interpolated into the authority of the state, then the narrator’s withholding of names becomes a tangible if embryonic mode of resistance.

The search for methods of radical resistance is an anxiety central to the text, both for the narrator and her companions. Voltairine, the Little Girl, and Émile are constantly searching for ways to push against the disciplinary society, to avoid becoming “docile bodies” and instead function as agents of denial and opposition. For Voltairine and the others, dance, writing, arson, and occupation — as in the occupation of space — all function as different methods of radical expression, ways of saying something basic and atavistic. Rather than pushing back against the specific forces of normalization and punishment that continue to oppress and suppress (the various forces that support the “Democracy of Rape,” the medicalization of “mental health”) these forms, the three come to assert, are a kind of resistance without target: they are general disobedience, primal expression, pure, oppositional presence. The Little Girl is diagnosed with “oppositional disorder,” a symptom of which is “being in opposition to one’s surroundings.” Rather than a diagnosis, this symptom becomes a kind of ontology, a method, a weapon.

As the latter two sections of the book progress, then, the three characters experiment with more and more intense ways of being-in-opposition: they join a group that occupies the villa of a European plutocrat, hangs banners, and, perhaps — it is not entirely clear — sets fires. In terms of the text of the novel, the increasing levels of opposition are also reflected in the flood of texts written by the Little Girl that are interspersed with Voltairine’s narrative. These texts — which provide some of the most inventive and challenging moments in the novel — range from theoretical texts on the role of the “Check-Out Girl” in combatting loneliness in a late capitalist society to essays on Voltairine de Cleyre and the Haymarket Massacre. The narrator reads them all, and the reader can feel the effect they have in turn on her own prose.

Though We Are the Birds of the Coming Storm begins, at first glance, as a story “about” friendship between women — about the difficulty of finding someone to “protect [your] absurd manias” — grief and loss, sexualized violence and mental health, Lafon’s novel takes a highly nuanced turn and asserts itself as a novel “about” the power of nothing, in an atavistic sense: it becomes a novel about the anticipation, of what comes before. But how can the novel function atavistically in the way that dance or arson can? How can we use language to escape the constraints and stagnation that language itself produces? In the words of the Little Girl, “how can we be sure that what we think — our ideas — aren’t surrounded by ropes? Or. Surrounded by the memories of ropes how?” The answer, also provided by the Little Girl, in the following paragraph, seems to be this: “Ha and then. No, I’ll be quiet.” Lafon’s text doesn’t look to answer those question of language, of expression — delineating an answer would almost certainly, as the Little Girl intuits, be self-defeating. Instead, she suggests, we should be quiet — not docile, but anticipatory, ready for the storm’s arrival.

Walter Gordon was born and raised in Berkeley, CA, and now lives in Brooklyn.