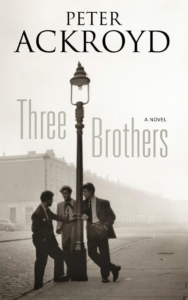 We’re not Peter Ackroyd, so we can’t all have read everything — not even everything by Peter Ackroyd. With every new book, reviewers rehearse and extend the familiar c.v. of literary biographies, histories, novels and prose retellings of medieval classics. (I’ve read some from the first three categories, but haven’t made it to his Canterbury Tales or his original poetry). I equate this English man of letters with an American counterpart, the great reading-machine Harold Bloom, in the way they both serve us as wayfaring probes surveying vast territories of print. They are the human answer to book-scans and aggregators. Their results come up with personality. But Bloom’s picks are infused with somewhat crude and predictable valuations, while Ackroyd’s are anchored in historical chains. The word story was once a shortening of history, and Ackroyd’s plundering history for stories reunites the terms, tucking factual provenances back under the rubric of tales. Bloom’s Freudian obsession, his authors always locked in influential agons, presents a genre of criticism at its heart distinct from Ackroyd’s less affected readings of canonical texts, in which each work cooly upholds its place in a prevailing historical narrative.

The diversity and sweeping scale one finds in an Ackroyd nonfiction — The Life of Thomas More, for instance, or in the first two volumes of his encompassing English history (Foundation, and now Tudors) — tend in some perverse way to strengthen Bloom’s defense of literary canons, minus Bloom’s compulsive rankings; for Ackroyd’s scrupulously researched cast of Dead White Men is whiter than Bloom’s if just as dead, confined as so much they are to a single island, and a single city on that island. But Ackroyd is surprisingly diverse, despite only writing about London. The streets of Ackroyd’s London are so thoroughly excavated in his studies that each cobblestone seems to account for a discreet chapter in the planetary record, suggesting that if you wait in the right spot long enough, much of the world will come to you: Germans, Romans, Vikings, more Germans. The three brothers of his latest novel come of age in the 1960s, but the scarred streets continue to lie in shell shock by Hitler’s bombs. The lingering dissonance of a destructive past can be heard when one brother saves a church from an attempted arson and the perpetrator reveals himself to be one of the “Blitz boys,” taking a palliative pleasure when nabbed in unloading from his wracked memory the atrocious scenes witnessed while fighting fires during those wartime attacks.

There are two other traumas in Three Brothers. The novel traces a trauma in the family, while its very structure seems to confront readers with a traumatic literary development in absentia, Modern Realism, wired as the story is with so many coincidences and hyperlinks. To contemporary readers accustomed to elaborate psychological interiors mapping bold desires and snarled anxieties, there is a perfunctory feel, as if Three Brothers dropped off the assembly line without the proper finishing touches. But the book isn’t a rush job, and its old-style luster is in part due to the author’s avoidance of what are now acknowledged as basic tenets inculcating the majority of fiction-writing students, stateside. Ackroyd could be indicted for the same impersonal flashiness as our postmodern rogues (Barth, etc. — the untouchables outside the Iowa Writers’ Workshop regime, as described by Eric Bennett), but in taking up a Victorian register, he provides an object lesson in the possibilities that are so often preempted in contemporary writing by Realism’s limiting franchise on experience and social realities.

The brothers Hanway, we are told on the outset, “with a year’s difference of age between each of them . . . had been born at the same time on the same day of the same month — to be precise, midday on 8 May.” After their mother abandons her husband and children, the boys grow further apart in young adulthood, in seemingly unconnected spheres. Harry, the extravert eldest, makes his mark in newspapers, while the contemplative middle child, Daniel, proceeds on the academic track, as an English professor and critic. The youngest, Sam, a wandering mystic, eventually settles as a doorman and collector for a predatory landlord.

Out of touch with each other for years, the triad is linked by a network of secondary characters and circumstances to which the reader is privileged by a brisk succession of scenes. Personal connections, backroom deals, payola, and prostitution all keep Ackroyd’s London in motion, which isn’t any more revelatory than the cast of stock characters the author draws on to populate his vividly-described streets, from rough and tumble Camden Town to fast-moving Fleet Street. Ackroyd’s biographical treatments of places (London: The Biography, Thames: Sacred River ) are quick to applaud London-as-a-character, but the brief, deliberate plan of Three Brothers leaves it vulnerable to the charge that the city is its only character. Both these assumptions ring with the straining fetters of postwar Realism. What sense of place. What senseless telling of what people do, in place of showing us who they are.

Ackroyd at least is showing us who he is. Autobiography emanates from the common setting Ackroyd shares with his characters’ comings-of-age and the way all the Hanway men, father included, account for the multiple facets of Ackroyd’s career. Philip Hanway, the father, aspired to write fiction and becomes at best a Soho scenester “not sure of his way forward,” before knocking up Sally and assuming the responsible position of soused nightwatchman manqué. The mercurial Sam, the freest in finding his way — roaming the streets, feeding the poor, volunteering at a local church while conversing with the Virgin Mary — is closest in spirit to the poetic visionary, were he ever to translate his experience into words. As intrepid reporter, Harry sniffs out the juicy story, upholding the front line of history. He doesn’t read novels, but through Ackroyd’s promiscuous lens, he writes them. An upstart critic, Daniel provides a literary conscience that is pointed enough to galvanize the novel along critical lines. Vagaries of plot evoking Dickens are affirmed by Daniel’s callow pronouncements: “I stopped reading [novels] when they reached the twentieth century.” A rival bookworm raves about mid-century Americans and Daniel couldn’t care less. As with the chivalric romances that permeate Don Quixote, or Ulysses’ Homeric cast, Three Brothers is a pastiche, though more compact than its predecessors, running breakneck on Victorian fuel. The author’s reading doesn’t occlude characters, it sources them. A pivotal figure like Sparkler, a thief and male prostitute intertwined with all the brothers, is wholesale Dickens, a beatnik Artful Dodger. The brothers themselves venture out Pip-like into the disenchanting Big City, robbed of their history like orphans by their mother’s disappearance when the oldest is 10.

The Hanways’ Camden council house is in the same area where 10-year-old Charles Dickens was introduced to unforgiving London, forced to give up his nascent education for grueling factory work. In Dickens, Ackroyd reminds us that at this point, the young laborer had already been charmed by Victorian melodrama and “lost in books.” Now he had to witness the horror of his dad pawning those books. “Just as he saw through the stock conventions of the theater, so also he believed himself to be above the ritual pieties of adult life.” Against the injustices and machinations of the adult world, “words were the only proper token of reality.” Ackroyd concludes, in Dickensian tenor: “The rest was a game, a spectacle, a phantasmagoria, a nightmare.” In T.S. Eliot, A Life, we find a skepticism that joins Ackroyd’s biographical and fictive strategies. “Eliot himself . . . might have considered negligible the surface of his life which is apparent to biographers. Biography is in that sense a convenient fiction since no one can probe, without the risk of farcical failure . . . hidden perceptions or experiences.”

Three Brothers denies its characters convenient fictions, refusing Modernism’s naïve tendency to objectify subjectivity. Along the backwards journey of Ackroyd’s early biographies, from Pound and Eliot back to Dickens, a statuary reanimates into a quadrille. The incestuous circles of power and influence between big business, politics and press, dancing more by design than mere chance atop the heads of the silent poor, are so Dickensian they might be American. What’s too artless for fiction could be pulled from today’s headlines. The strong-arm tactics, for instance, by real estate magnate Asher Ruppta against his powerless tenants stays out of the press for a time because he doesn’t have the misfortune of owning a professional basketball team. At every turn, psychological particulars are overridden by circumstance. It is in fact a departure from Dickens, though not from his age, that these situations in Three Brothers are socially, not morally, determined. No sooner has Harry killed an exposé on Ruppta, at his publisher’s request, than he is partying with the publisher and marrying his daughter. “They call me a muck-raker,” Sir Martin Flaxman flatters himself. “But you have to get the best journalists. Like Harry here.”

Sir Martin is himself an arriviste and brags about his illegitimate origins. But though acclimated, he will eventually buckle under these impersonal pressures, as do many of Ackroyd’s other principal non-agents. Daniel’s literary aspirations are corroded by TV talk-show sensationalism and boredom. Sam, with the least airs, seems to get along best. He reconnects with his mother despite her sullied past. Harry, digging through court papers, discovers that at the time his mother left, she was convicted of solicitation and sentenced to three months in jail. Daniel and Harry can’t face their mother’s trade, or the corrupting familiarity their own careers require. Sally is their blind spot. “You’ve got to take your chances where you can find them,” Harry instructs Daniel. “No one gives you help in this world.” The narrator interrupts here to remind us of the editor who pulled Harry from the Camden Bugle to the prestigious Morning Chronicle because of their shared history at the Bugle. This kind of authorial counterpoint is not really in keeping with the Dickensian mode, which tends to overindulge the characters and let them hang by their own words and actions. The Victorian master Ackroyd hews closest to here is Trollope, and the nod in his book comes from Sally’s maiden name. Sally is originally a Palliser, of the family chronicled by Trollope in a famous six-novel sequence.

In his breakout novel The Warden, Anthony Trollope defines his brand of social realism by going directly after Dickens, who by the 1850s was an institution. “The artist who paints for the million must use glaring colours, as no one knew better than Mr. [Popular] Sentiment,” Trollope rails. By painting a muted portrait of an honest clergyman caught at the center of a social injustice, a man demonized by the press and popular fiction, Trollope contends that “there is but little evil that has not in it some seed of what is goodly.” Life is more complicated, and in his later, much longer novels, Trollope approaches a kind of existentialism in his characters’ harried delays and mini-revolts against decorum, even as he intensifies the cultural and economic headwinds that they attempt to navigate. His biggest personalities — like Augustus Melmotte in the prescient The Way We Live Now (1875) — are puffed up by the carefully observed escalation of industry, not out of any attempt to indulge audience expectations. Peter Ackroyd, by skipping over many of the quiet moments his audience expects, somehow, like Trollope, lands in territory that seems both truer and timeless.