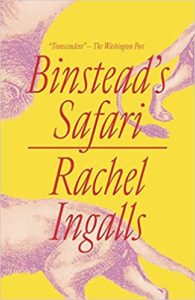 We often find joy in women who misbehave. Recent films like last year’s incredibly popular The Favourite, the lesser-known but equally delightful Emily Dickinson biopic Wild Nights with Emily, and classics like Thelma and Louise all show women loosened from the strictures of men and their expectations. These films share the energy of writers like Fanny Fern, Anita Loos, and Elaine Dundy, who write about women departing from patriarchal norms of labor, domesticity, and propriety, to embody a hope that we might re-build the world differently. Rachel Ingalls explores these promises, especially in her novel Binstead’s Safari, recently re-issued by New Directions. Ingalls, who passed away last month, published a number of novels that had declined in popularity after some initial recognition in the late twentieth century. Toward the end of her life, Ingalls saw the beginning of a small revival of her work (led by presses like New Directions) that suggests these worlds explored in her books might have finally found more sympathetic readers in our present.

Ingalls follows novelists like Edith Wharton, who masterfully explore the ambivalences, pains, and boredoms of being trapped in a life which you did not agree to live. Whereas Wharton’s protagonists run into the ire of the societies they flaunted, Ingalls experiments with what happens when misbehaving women are unbounded from realist conventions—inhabiting worlds of science fiction, as in Mrs. Caliban (also recently reissued by New Directions), or adventure, as in Binstead’s Safari. It’s not as though otherworldly or supernatural consequences are better or worse than those imagined in realist novels, but that they are wholly different, brilliantly weird, and surprising.

Binstead’s Safari begins with the ordinary comedy of two people sharing a relationship, which Ingalls gradually twists to odd and eerie ends. When Stan Binstead, a British anthropologist in America, plans to leave his wife Millie in New England during his research trip to London and subsequent safari in Africa, pleading the cost of paying another person’s way, Millie objects. In a stroke of comic fortune, “as though planned that way, her Great Aunt Edna died, leaving her a nice little sum of money and several glass cases filled with knick-knacks that would have been useless all the time they were going into the collection, yet were now in fashion and could be sold for quite a lot.” Ingalls’s winding sentences seem to adopt Millie’s voice, and the cases filled with knick-knacks provide their own justification (and financing) for Millie’s decision to join Stan on his trip. Stan planned to reminisce and philander with his college friend Jack, but Millie disrupts the boys club, both in London and then in the masculinized atmosphere of the African safari.

And Millie is hardly clueless about this. Ingalls’s protagonists painfully feel the lovelessness of their situation. In London, Millie is left to herself, going to plays and getting a makeover, trying to become something beside the “frumpy” wife she thinks Stan sees. Of course, she is not actually the problem, but that doesn’t make life any less painful for her. While Millie does not literally leave her husband or escape their marriage, Ingalls suggests that their trip abroad provides a new context in which Millie can feel differently, discovering what new sensations and relations can become possible. For Ingalls, there’s a certain pleasure, not in pain itself, but in her description of that dejection, as Millie finds new sensations and attachments outside the readymade configurations of her failing marriage. She writes about pain to show that suffering can produce something other than the mere repetition of itself.

In the book, Africa is not a setting in its own right but rather an illustration of each character’s myopia, as they cannot see anything beyond themselves and their fantasy of the continent. (They never specify the country that they are visiting.) However, characters try to establish their own connection to this experience, but they aren’t always successful. Stan tries to one-up other travelers, beginning with Millie, who expresses surprise at her first sight of the continent. “What did you expect – grass huts?” he asks her and immediately thinks to himself, “Of course, that’s exactly what she did expect.” Ironically, her expectations have become whatever he expects them to be. He believes his academic perspective is more noble, so he often criticizes the gin-toting vacationers, who set up camp to drink in “the wild.” But Ingalls shows that Stan is just like everyone else, projecting his own desires onto the foreign and exoticized landscape. His supposed expertise more often takes the form of biased assumptions about the folklore he studies. He is always ready to reduce his fieldwork to established archetypes, at the same time that he expresses a desire for “the part of the mystery you couldn’t get by sitting at a desk and theorizing.” For Stan, this “mystery” is just an imagined authenticity, a construction of his own fantasies that he thinks is more “real” than everyone else’s. In Ingalls’s novel, expertise is just an imagined superiority that sets you apart from the world and the people with whom you share it.

On the other hand, Millie’s performed naiveté cleverly undermines the norms of the masculine safari. What these men often assume to be her “stupidity” is gradually revealed to be an awareness of the contradictions and hypocrisies in their work. Shortly after arriving, Millie questions Dr. Rupert Hatchard, author of multiple books detailing his safaris, about some of her favorite stories recounted in his books. Her questions uncover that most of his stories are borrowed from other men in the field and are “considerably cleaned up” for publication. Just as Stan’s early attempt to exclude Millie from the trip was motivated by financial self-interest, safari masculinity is revealed to be a pretense to profit from the men’s ability to travel and gain access to stories that aren’t their own—when they’re based in reality at all.

Ingalls’s mastery of the weird and eerie uses the relationships between characters to build unease. A subtle violence bubbles behind all these scenes, as Ingalls weaves together each character’s outward presentation with what they refuse to recognize in themselves. In this setting, Millie gradually becomes the object of the men’s attention, disregarding Stan and having an affair with the mysterious Harry “Simba” Lewis, from whom Hatchard has borrowed multiple stories. At the same time, Ingalls removes Millie’s interiority from the narrative. She evokes Millie’s affair with Lewis more for the way that it escapes the other characters’ understanding than as a concrete and observable event in and of itself. Whereas Stan belittles Millie’s experience and knowledge, Ingalls suggests that her other relationships escape the bounds of (even narrative) understanding. She evokes the ineffable worlds that people in relation make possible. When Lewis sends Millie a letter, it is described through its lack of content, as the envelope is “blank except for her name.” Millie goes “back to her tent to read it,” and Ingalls intentionally removes her from the scene, withholding details of Millie’s relationship with Lewis from the narrative. Their relationship becomes more eerie, with Ingalls suggesting Millie’s affair might continue after Lewis’s reported death, or, more uncannily, that Lewis may supernaturally embody the lion stalking the characters through the last part of the book.

The novel’s suspenseful energy erupts in Millie’s death at the claws (or are they human hands?) of the lion. Ingalls leaves readers to dwell in the uncertainty of her last moments, as Stan “saw only the speed of the impact, a flash of the moving body, the open-jawed head, all teeth instead of a face, and a splurge of blood, with Millie twirling in front of him and then suddenly twisted on the ground.” This visceral description refuses to ascribe meaning to Millie’s final moments, instead only describing “a flash of the moving body,” not possessed by any one person but rather a result of each character’s inability to fully understand another’s experience.

Ingalls suggests the terror of this relation near the novel’s end. As Stan and the other men travel through the wild, initially thinking they are hunting a lion, they gradually realize that they are its prey. After the other characters are killed, Stan becomes closely attuned to the animal, natural, and human sounds blending together around him: “Every slight movement he made caused a distinct sound of unmistakable importance.” Even as he finds importance in this noise, he cannot settle on a concrete reality behind it. He conjures various events of his life—missed opportunities, undervalued pleasures, and unlived futures—as the lion (or is it multiple lions? Or is it a human?) follows him.

Binstead’s Safari begins in all too familiar territory—a bitterly comic account of a disaffected couple whose marriage is falling apart. The novel demonstrates Ingalls’s ability to show the tensions and contradictions shaping ordinary life, as Binstead’s Safari reveals the intense connections, sensations, and desires that stalk between us and the people with whom we share the world. As the their failing marriage follows them on their safari, Ingalls shows the disastrous and fantastical consequences of their interpersonal problems once they are removed from their familiar routine. In many novels, the survival of a marriage symbolizes a return to normalcy, but Ingalls twists that convention by rendering marriage as a stricture on each individual’s autonomy as well as a threat to the Binsteads’ lives. To conjure this marriage’s contradictions, Ingalls blends genres and styles to question the cost of these personal attachments, through the unnerving effects they inflict in our world.

Adam Fales is a PhD student at the University of Chicago. His work has appeared in the American Antiquarian Society’s Past is Present, the Journal of the History of Ideas’s blog, Full Stop, and the Los Angeles Review of Books. You can find him on Twitter @damfales.