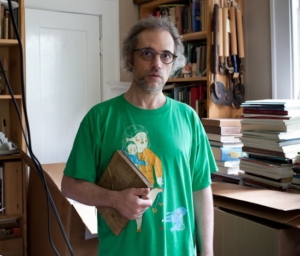 Wittgenstein once wrote, “I believe that if one is to enjoy a writer one has to like the culture he belongs to as well. If one finds it indifferent or distasteful, one’s admiration cools off.” Without naming names, I’ve become particularly impatient with a certain kind of contemporary realist novel, the kind where the author serves as a native informant for some remote corner of subjectivity that the reader, lacking the requisite amount of imagination and empathy, needs a helping hand to access. Perhaps my problem is that these corners are not remote enough, where the writer would actually have to do a little work, labor a little harder on the level of the sentence or adjective or character, to show the reader some unknown unknown. To steal a phrase from my friend, perhaps the realist novel has become the literary province of the “norm dog.”

I like Bill Cotter’s culture. It’s a strange, funny, disturbing, and interesting one. The Parallel Apartments, Cotter’s second novel, is a sprawling, intergenerational epic that follows a family of Austin women as they barrel headlong into a set of revelations probably best left undiscovered. You can read our review of the novel here, and get a sense of what distinguishes Cotter as a prose stylist, a purveyor of what Heidi Julavits called a “word drug,” in excerpts here and here.

Over email, I asked Cotter about the role of music in his writing, where he sets the bar for success, and if, like many Austin residents, he’s seen Harry Knowles around town.

Michael Schapira: I loved the staging of Burt Moppet’s performance with his band Ye Moppe Hedds, fully reclined on a bed with groupies sidling up to him. What is the mental archive you are working with when you are writing a scene like that?

Bill Cotter: The mental archive I mined for that scene, in which the character of Burt plays his song “Ye Cube of Happy Sugar” while in full repose on a king-size bed on a roadhouse stage, contains fragments of a period in my 20s that I spent listening to ’60s psychedelic music. The silly lyrics of Burt’s song are meant to send up the inimitably absurd compositions of  that musical movement, such as The 13th Floor Elevators’ “Slip Inside this House,” in which this lyric can be found: Bedoin tribes ascending/From the egg into the flower,/ Alpha information sending/State within the heaven shower/From disciples the unending/Subtleties of river power/They slip inside this house as they pass by. A lyric from “Ye Cube of Happy Sugar” strives to emulate: Water and holes in ye kitchen sponge/is my love of you today./Plastic circles in ye Spirograph game/are my thoughts of you today./Ye tortoise in ye rocket ship,/ye microbe on ye paper clip,/are things only you can say/how much they weigh. Today. I can’t tell you how much fun it was to write that.

What is the most interesting show you have ever seen in Austin (or heard about second hand, which may be more interesting)?

Honestly, I haven’t been to too many shows in Austin, even though I’ve been here 17 years. I’m getting too old and tired. My girlfriend and I had tickets to see Gogol Bordello a couple years ago, but at the last minute decided to stay home and nap. But I do remember a really great show about six years ago, when Bobby Bland played (I think) Antone’s club downtown. I’ve always loved Bland and his unclassifiable blues, and he played a long show for a thick ruck of clearly idolizing fans. It felt like there was an extra dimension to that show. And there was, as it turned out — Pinetop Perkins, one of my favorite pianists, was in the audience. Bobby Bland brought him on stage in an awed hush.

I want to ask two related questions about reader reaction. The woman who reviewed The Parallel Apartments for us noted that she laughed out loud several times, but also had some visceral reactions (not laughter) to other parts of the book. I shared this, but for me what allowed you to seamlessly move between these two registers was that the language is so consistently strong throughout. Does your focus on language, working at the level of the sentence or the adjective, allow you to keep those questions about how your reader might react off your radar?

And the second question is whether you are cognizant of the fact that what you write could solicit a visceral reaction from the reader. The bottom really drops out for some of these characters and it is a real gut punch to follow them all the way down. Not that you would need to self-censor in order to avoid offending a reader’s delicate sensibilities (the bottom drops out for plenty of people in real life and things often go from bad to worse), but is this kind of reaction something that you have in the back of your mind? Maybe put another way, is there a particular kind of fear that is different from the kind you would imagine other writers feel?

Let me try answer both at once. There are some frankly grisly scenes in the book that will, in some people, produce visceral reactions, though grossing out readers was never my intention. In the novel, I built up the plot about halfway, and let the characters take over from there; I just watched what they did, and sometimes they did awful, gory things. I felt like it was my job to simply record their actions in the most vivid ways I could, even though I was certain it would alienate some readers. Not to be precious about it, but I didn’t want to soften the ugly slicings and hackings and antic sexual imagery in order to sell more copies of the book. I’m never going to make a living at writing anyway, so why not be true to the characters?

This book is ambitious on several levels — being told primarily from the female perspective, being quite long, covering difficult subject matter, and weaving together many story lines across a long period of time. Did you ever have in idea on where you might set the bar for success on the book, or is thinking in those terms just courting a set of anxieties?

The bar of success was simply publication — I didn’t care about anything else!

What kinds of things were you looking at when conceiving the architecture of the novel? Is it people you encounter or read about, or memories? This is usually a boring question, but with all these different strands in the novel, and with Austin always present as its own character stitching them together, it seems right to ask in this case.

My first novel, Fever Chart, was (in part) autobiographical catharsis (I believe most first novels are), but the present book I wanted to construct entirely of invented scenes and characters, without reliance on real people or events as models, even though it is of course set in a real city. I didn’t succeed at this. Two members of the matriarchy that is the central “character” of the book, Mere Durant and her daughter Charlotte, were inspired in small part by my now-deceased grandmothers, Pretty Mama and Mamaw, who, as Amarillo, Texas matriarchs, were both as unbending and potent as their fictional counterparts. And there is a scene in the book where another member of the matriarchy, Justine, returns not to the place of her birth, but to the exact location of her conception, looking for answers to old mysteries. That scene was based on a real moment, in which my mother, while driving with me down a road a few blocks from my house, slowed down in front of a decrepit duplex, pointed to it, and remarked that that was where I was conceived in early 1964. I was shocked by this revelation — my mother is not one to refer to the carnal act in any way. In any case, the incident bore whole an entire character, Justine.

Did you read lots of comic books as a kid (or as an adult)? On one level you could see the telescoping rhythm of the novel as unearthing animating traumas in each character, but I almost read them as origin stories, given that each of characters has something like a quest.

I did, and still do, read comics. I’m rereading Pim and Francie right now. I’d never considered the geneses of certain characters in the novel as origin stories, but I think you might be right — each of them is on a quest — Justine for the truth of her birth, Lou for absolution, Dot for healing, Charlotte for freedom from guilt, Livia for love, Murphy for his true calling, April for motherhood, Marcia for the respect of her father.

In a previous interview you said you were working with the title The Instant of the Mothers which after reading the book seems like an apt title. Was there any reason, other than the longer you sit with a title and the more you develop a book the more likely it is to change, that you chose The Parallel Apartments?

As the novel grew, the “instant” referred to in the original title (where a character secretly witnesses an illicit kiss between two characters who should not be kissing) became plural — later drafts featured several “instants,” obliging amending to The Instants of the Mothers. However, the editor pointed out that “instants,” could be misheard as “instance,” sending potential buyers on a wild goose chase, ultimately losing sales. We bandied about several other possible titles, including The Punchline Apartments, Mothers in Free Fall, Wuthering Directory, The Balcony, A Promising Despair Now in Tatters, Sugar of Lead, and a not-half-bad suggestion from my six-year-old nephew Jack Henry: Moms and Kids.

I’m sorry to say I don’t know the show, but I did see Knowles once — when I worked as a bookseller at BookPeople here in town in the late nineties, I glimpsed him wandering through the Romance section. I wish I’d introduced myself!