Seiobo There Below – László Krasznahorkai 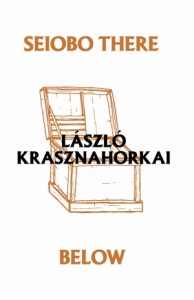 Motionless under the moon-beam,

Up to his feathers in the stream;

Although fish leap, the white heron

Shivers in a dumbfounded dream.

Yeats’ plays, featuring masked performers, a chorus and dancers, were inspired by Noh drama and repurposed to create a new form of drama for the Irish stage. Noh is a traditional Japanese musical theater evolved from Shinto ritual, folk traditions and courtly performances, and is notable for its stylized use of masks, costumes, music and dance. These details of ritual movement, language, and objects are invested with vast emotional importance. In Calvary, Yeats draws on Noh traditions of ritual, stylizations, and formalizations to penetrate the consciousness of audiences accustomed to the familiar and sentimental with a sense of the sublime, the universal, and the mythic. A white heron opens the play about the Crucifixion — where the divine meets death. The bird is suffering, alone and stands apart from the story; sufficient entirely in its own gaze. It takes no notice that God has come, because God has not come for the birds — yet Men will pay God no more heed than the heron.

László Krasznahorkai’s Seiobo There Below also begins with a white heron standing transfixed in the water. But far from a dumbfounded dream, it demonstrates absolute concentration, standing perfectly still for hours until the perfect moment is reached, when it strikes in a flash. As in Yeats, the bird’s hunting ritual is at once transcendent and dangerous — the bird represents a beauty both vulnerable and “unbearable” — and Krasznahorkai, like Yeats, is fascinated by the possibilities and perils of such transcendence through art and ritual. The bird embodies at once the potential of intense observation to give meaning to everything but also the tragedy of beauty wasted on an indifferent or inadequate observer, or lost forever:

. . . .no one is looking, no one sees it, and if it’s not seen today then it is not seen for all eternity, the inexpressible beauty with which it stands shall remain concealed . . . something is lost before it even has a chance to appear, and there shall be no one to bear witness to the recognition that it is the one that gives meaning to everything around it . . . the unyielding artist of this landscape, who . . . as the fulfillment of unswerving artistic observation, rises once and for all above that to which it gives meaning, rises above it . . . above the local meaning permeating everything, as well as above that of its own actual activity, because what is the point of being beautiful, especially when it is just a white bird standing and waiting . . . .

Observation itself is the ritual, which is a neat example for a book about ritual and observation. In Seiobo There Below, we see in disparate examples Krasznahorkai regarding art and artists through the lens of Noh; the very act of making or viewing art becomes a chance to abut the sublime, or to crash into it. Channeling himself through a character’s voice, the author describes not only the power of Noh, but how Noh informs his view of the purpose of art:

. . .and he was able, exclusively, to lift them up through the Noh . . . for Noh is the lifting up of the soul, which, if it doesn’t occur through Noh, means that the Noh is not occurring, but if it does occur, than anyone can comprehend that above us and below us, outside of ourselves and deep within ourselves, there is a universe, the one and only . . .

As with the heron, the purpose of Noh, and from Krasznahorkai’s perspective, all art, is to provide an opportunity to transcend the literal activity or form of art to connect to the infinite. If Yeats’ work is a fitful repurposing of the tradition then Seiobo There Below is a sincere attempt to essentialize and apply that sensibility, not only with the use of Noh-inspired literary techniques, but in suggesting the transcendent experience of Noh can be attained through rising above the ritual activities of creating, consuming and experiencing art. In a sense, the book is a ritual — but is transcendence to be found in the reading, as well as the writing? For the right reader, the answer is yes.

The stylized form of the book, beginning with the table of contents, numbered in the Fibonacci sequence, alerts the wary reader that this will be no ordinary novel. These chapters appear as an eclectic assortment of short stories about the power of particular works of art, with the odd Italian language crossword puzzle thrown in. They are composed of sentences that barrage the reader with details impossible to take in all at once without pause. Those sentences may run for a dozen pages and constitute an entire chapter, conveying infinite erudition and insight with breathless urgency. It’s as though his chance to express the sublime might disappear with each period, like the inadequate observer missing the moment of the Heron’s strike (this missed brush with the sublime is also theme of Yeats’ play At the Hawk’s Well).

The breadth of this erudition spans beyond well beyond the Noh, beyond Japan, beyond Moorish architecture, beyond Quattrocento art, beyond Baroque music — there is almost no end. His subjects include the Louvre security guard as well as the Renaissance genius — Boticelli, Lippini, and Raphael are vivid characters, and we encounter many major and minor works of art, as well as the occasional madman. Ritual is experienced in the prayers said over a venerated statue of the Buddha or in its disassembly and restoration, in the preparation of a wooden panel for painting or in visiting the acropolis. To approach the sublime something beyond ordinary observation or preparation is required; and yet that hard-won proximity proves dangerous even when handled with perfect propriety. The carving of a mask by an artisan of anchorite discipline produces a demon; the creation of sculpture reveals the tortured souls beneath the ground. To see with the power of an artist is the same sight that reveals madness and inspires murder. We receive sublimity imperfectly at best; perhaps it is better not to create it or receive it at all.

Although our ultimate fate is certain (or literally sealed beneath earth), the existence of this book suggests art represents a chance worth taking. Seiobo of the title refers to a fifteenth century play about the Shinto goddess of the same name. The goddess’ peach tree bears fruit which confers immortality but blossoms only once every three thousand years. She visits earth to gift that rare fruit to the deserving; in a sense this book describes her visits, each a rare brush with the sublime. A god, anyway, has come for the Heron. Those who share its patience and focus will be rewarded with their own glimpse into the sublime in Seiobo There Below.