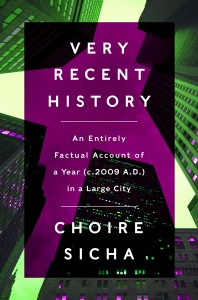 Much internet-ink has already been spilled on the weirdo space-ship-distant 3rd person style Choire Sicha uses in his book-length debut Very Recent History: An Entirely Factual Account of a Year (c. AD 2009) In a Large City. But such speculation about the reasons Sicha has employed this style is not necessary. Nestled just right of the center of Very Recent History, Sicha answers the question of why he wrote his book like that. The answer is as follows:

At this time, people still weren’t entirely sure of their origins. Most people throughout time had kept records, but they were always such confusing records. First, the records were so myopic and self-centered that they didn’t make much sense to people who came later, with offhand references that would make no sense after twenty or two hundred or two thousand years. And then, people made records that were created physically in an impermanent and shortsighted fashion, and many of these had deteriorated, or burned, or the machinery that could read them no longer existed. And then, if a history survived that, often it happened that these documents had been translated so many times, into language after language, that they stopped being intelligible.

So, Sicha wanted to write a book that would really last, and remain intelligible. And then, he wanted to express some sense that he knew how futile it was to try to write a book that would last. And then, he wanted to make fun of himself for both having the impulse, and for following through on the impulse. Insert here, non-sarcastically, that black-and-white gif (pronounced with a hard g) of an audience clapping enthusiastically. Even if his goals are unreachable, the result of his work is remarkable.

Very Recent History is written like an alien invader describing our culture to her friends on their home planet, via email. For example:

Where there was money, some would hoard it. Some would never get much of it. Some who had much of it would use it to get more. This was a sensible reaction to there being money.

Sicha also writes his own, new definitions of concepts like “money” and “insurance.” The trick, which had the danger to be gimmicky, succeeds for two reasons. First, because it makes the scope of the book feel truly big, zoomed out to an establishing shot, even though the characters that populate Very Recent History are a very uniform and insular group of gay males in their 20s. Second, by defining common objects as if they were unknown, he forces the reader to actively parse those concepts while reading, rather than just glide through lines of words familiar enough that our brains don’t really need to think about them.

While the style works, the real success of the book comes in the sharp emotional moments. During a section of the book when Sicha itemizes and explains all the debts the central figure, John, carries, I felt like a live fish flopping on a dock, gasping to breathe. And I felt an overwhelming sadness like drowning in one of the book’s final moments:

It wasn’t that everyone stopped being friends after this one last night. They were still friends, after so much; they just weren’t so piled up together. It was part of the end of being young, or it was part of it having been the strangest, most exhausting year. Or it had just been a moment. After this, whole weekends, and then whole weeks, went by without everyone hanging out.

These moments work for me because my own youthful times are ending, and I have my own debts to pay, but my immediate familiarity with these situations isn’t a prerequisite of enjoying the book. It works for the same reasons adults can still connect with the teen characters of YA: not only can a reader empathize with any well-written character, no matter the age, they can remember what it was to be a teen and to feel that way, and so intensely. Sicha makes us remember those intense moments and the tangles of our lives, both emotional and financial, which is how Very Recent History gets under our skins.