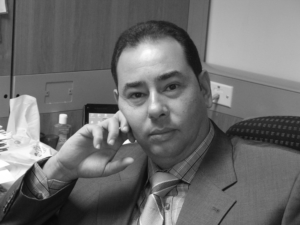 “I was once sitting on a plane when I felt somebody looking at me,” Khaled al-Khamissi recounts. “I turned around, and saw Bahaa’ Taher. I went over to say hello, and he told me ‘I was sure I knew you. Why? Because you were reading a book, and I know everybody who reads books in this country.’”

Al-Khamissi is a somewhat surprising character to speak about the sparse literary readership in Egypt. His first novel Taxi quickly became a bestseller when it was first published in 2006 and has enjoyed enduring popularity.The book is currently on its 23rd printing, with over 200,000 copies sold in Arabic, and has been translated into ten other languages.

The book is a project of social realism, describing the weight of injustice suffered by the poor during the last years of Mubarak’s reign. Through fifty-eight short sections, each with a different driver, al-Khamissi travels through the alternating desperation, optimism, and resilience of Cairo’s cab drivers. Police brutality, encroaching privatization, and systemic corruption fill the pages of his trips around the city. Dialogue and anecdotes are rendered in vibrant colloquial, and form a chorus of sincerity, rage, and at times humor in the face of seemingly insurmountable poverty and injustice.

Often mistakenly described as urban sociology, ethnography, or oral history, Taxi is in truth a work of fiction, albeit one inspired by al-Khamissi’s many years of riding cabs in Egypt’s capital. Yet the veracity of the tales and the familiarity of the characters resonate with readers, speaking clearly to the power of fiction to describe reality more acutely at times than documentary.

Khaled al-Khamissi is an Egyptian writer, producer, director, and former publisher. He graduated in Political Science from Cairo University and did his graduate studies at the Sorbonne. He worked as a journalist for the Al Ahram desk in Paris, before founding Nusus publishing house and Nile for Cultural and Media Production in Egypt. Al-Khamissi is also a prolific scriptwriter and documentary film maker, and writes a weekly column for the newspaper al-Shorouk. He is the author of two novels: Taxi and Noah’s Ark.

The following is a translation of a Q&A between Al-Khamissi and students at the Center for Arabic Study Abroad (CASA) at the American University in Cairo on March 14th, 2013. In it, Al-Khamissi speaks about his influences in Taxi, colloquial and classical Arabic, and on writing:

“The idea for Taxi was influenced to a large degree by the content of the maqama, in particular those written at the end of the 19th century. The maqama is able to conjure up a vision of society in the mind of the reader and engage with what is happening in society. In one particular maqama written at the end of the 19th century, a man is buried at the end of Mohammed Ali’s reign and rises from his grave in 1879. A passerby takes him by the hand and leads him through the streets, through his shock and surprise at the changes that have taken place in those 60 years, and he tries to show the man what has happened in society. My idea was built on this structure – that someone rides a taxi, each time with a different driver, he gets surprised, and each driver would give him a piece of the puzzle. Taxi isn’t a collection of short stories, or a novel, or a piece of journalism, it is a maqama, an old style of Arabic literature that began in the Abbasid era. Each individual chapter is one facet of the greater picture, which is the street in Cairo in that particular moment.

Taxi tries to express what was happening on the street and in society in the moment in history it was written in. Its goal was to be expressive and representative of what was happening society. I felt in 2005, amidst the parliamentary and presidential elections, that it was a moment of real social tension on the street. There were big discussions going on, there was clear verbal violence in this historical moment, and there were the beginnings of political mobilization. People say that Kefaya started in 2004 as an expression of the social and political mobilization that was truly present in 2004 and 2005 and which has lasted and continues to increase until today. I wanted to be present in that moment of mobilization, and write a book that expressed the tone of society in the moment, and the state of anger on the streets I saw very clearly.

Around this time, I was riding in a taxi and saw an accident happen right in front of my eyes. The driver, an old man, told me “Ahmed Nazif is Canadian, didn’t you know? It’s well known fact. Mubarak’s gotten us a Canadian Prime Minister, tomorrow he’ll get us an American one, called Johnny Walker.” It’s a great story, very expressive of Egyptian sense of humor – not only is the Prime Minister American, his name is Johnny Walker! Amidst Islamic sensibilities, just imagine what the guy on the street would think of this. This little story is the push that made me write the book. I wanted a way to express the tone of the street at the moment, without a story from beginning to end, narrated by a variety of people, with a fine thread to tie it together, but an invisible one.

“There are three characters I consider the beginning, middle, and end of the book, three characters expressive of different facets of Cairene personalities that I have encountered and gotten to know throughout my life.

The beginning is the first driver, from the wise man who says: “A black ant on a black rock in the darkest of dark nights is sustained by God.” It was important that I started the book with this thought, because the idea is foundational in Egyptian thinking: that each individual, no matter who he is, depends on God’s blessing.

The middle character is Sherif Shenouda, the taxi driver who has a spiritual relationship with the Nile, who represents a metaphysical side to some Egyptians. The type of person is present in Cairo; there are Egyptians like him all around. This metaphysical sense of wonder is engaged when we are faced with bitter realities. Our history is one between tyranny on one side, and a people striving to live together under a burgeoning system of oppression on the other. For a cultured, feeling person to face this oppression, he must returns to the metaphysical, which is represented by this character’s connection with water, a connection that is vital, true, deep and human. He needs to interact with water in order to stay balanced. And this expresses something organic about all of us; we would be lost without the things that keep us ballasted.”

“The issue of using colloquial Arabic in literature is an old one. During the 20th century, intense debate has arisen periodically, particularly in the end of the 1940s and beginning of the 1950s. In 1942, Louis Awad wrote and published Memoirs of an Overseas Student entirely in colloquial Egyptian Arabic, and meanwhile my grandfather, Moufid El Choubachi, wrote a series of articles on his rejection of the use of the colloquial. He argued it gradually leads to a break with the long history of Arabic literature, which would negatively affect the continuation of literary movements.

Colloquial Arabic had always been used in poetry and in the theater. Yet when Tawfiq el-Hakim, the great Egyptian playwright, came to write a novel at the end of the 1920s, the dialogue was in beautiful colloquial. Others, like Naguib Mahfouz, write dialogue in diluted classical Arabic. At the same time, there is a long history of poetry written in the colloquial, which this was not considered troubling.

I do believe colloquial Arabic is more alive and dynamic, it is rich and intense. But we are not used to writing in it. People who argue the colloquial is unable to express the craziness of our souls and our emotions are wrong. People who say it is weak or incomplete are wrong. Likewise, people who say that classical Arabic is dead are wrong – I read and write in it every day. In Noah’s Ark, I moved between colloquial and classical with ease, and found this very natural. I do have a problem with people who write in colloquial because they aren’t authors or writers, and in the end produce work that is weak, paltry, and without depth. When they produce something insubstantial, they claim that is the nature of writing in colloquial. That’s not colloquial at all – colloquial can be extremely rich.”

“I believe that in literature, the author writes for himself. I wrote Taxi for myself, without really imagining that it would be published. To write for oneself is the genuine side of any writer, and then there’s the other side, which is a more general cultural understanding, because in the end the author realizes that he is participating in the wider cultural field. An author, first and foremost, needs to be a reader—a reader who has travelled across a wide expanse of literature, from classical to modern, and in different languages. An author must realize the importance of publishing, because without publishing there won’t be a cultural response. A book is a cultural actor who can influence and touch people, and the publisher is an essential part of the book’s movement through the world.

There is also a difference between the conscious and the unconscious in writing. The unconscious enters your work when you are truly writing. When you start, everything from the first couple weeks gets thrown in the garbage. And then you really start writing. As soon as you start truly writing, your unconscious becomes an incredible force. Just incredible. You can write something truly deep in these moments. For example, after Noah’s Ark was published, I returned to it and found among the pages things that had happened to me when I was a child. The value of the unconscious is immense.”