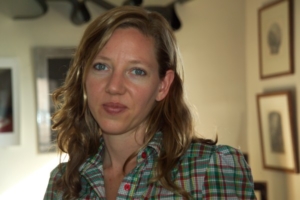 Maggie Nelson is the author of four books of poetry and four books of criticism. She has won a number of awards, including a 2010 Guggenheim Fellowship in Nonfiction and a 2011 National Endowment for the Arts Fellowship in Poetry. Her most recent book is The Art of Cruelty: A Reckoning.

The usual physical complaints — wrist/shoulder/neck problems. Nothing too grave. I make sure I get up every so often and make more tea. My personal life, oh yes. People being upset about what I’ve written — sometimes what I’ve written about them, and sometimes a more general dislike of my mode of expression. Or people fearing/accusing that being involved with a writer like myself means they will inevitably end up “grist for the mill” in some kind of take-no-prisoners fashion. The other day a student of mine told me the phrase, “ask forgiveness, not permission,” which I’d never heard before, and I thought it was a pretty good motto — albeit not one likely to please those who would prefer you ask permission. It’s also a little glib. But really there’s a lot of grey area in between these two requests, and that’s where I live. I’ve been on both sides of this issue by now, and my main feeling is, it’s better just to ignore that which bothers you, express and let express.

I would not say appropriate. But I have been interested in certain claims about such, as in Alice Notley’s poetic assertions that “the shape of a life is impoverishment” or that “the name of a self is poverty.” And then there’s Mo Fei’s comment, which has been important to me aesthetically, if not economically: “Poetry has to do with a satisfaction with limited things, a paring down. It is the acceptance of a certain form of poverty. It is not endless construction.” And the other day I came across this, in an interview with Anne Carson: “Interviewer: You have an interesting theory about money. Carson: It’s not that interesting. It’s just the inverse of the usual theory, which is that all money, indeed all numbers in life, should get to be bigger. But it doesn’t make sense that they should get bigger — why bigger? — so if you just switch it around and think all numbers should get smaller, it makes life better.” I don’t know what I think, really, but I do muse on these things. I know I love the fact that you don’t need much for writing, save about 60 square feet and a few utensils. I live with an artist who thinks big and often needs money to realize certain visions—casting in bronze, paying actors, etc.—and I am constantly relieved that this is not my situation. The simplicity of writing is part of its grace. But I don’t believe that things need to be difficult for people in order for them to create. If one has to spend too much of one’s time hustling, or hungry, the writing will suffer, as will much else.

I completely understand Cioran’s urge here, and I share in it. The impulse isn’t to debunk, but to understand more fully, to adumbrate. That said, “the truth of one’s condition” is a tricky phrase. What was, say, the truth of Emily Dickinson’s condition? Does our “true condition” consist of our daily details, our material lives, or is the sublunary itself a sort of scrim? These are theological questions as much as literary historical ones. I’m always for knowing more, at any rate — if you think you need to shield yourself from, say, Nietzsche’s daily wretchedness in order to venerate the Ubermensch, you’re truly missing the point.

I am envious of certain people’s intelligence, education, and imagination. I envy Carson’s knowledge of classics, for example, or the immensely wild and learned career of Gilles Deleuze. Even though I had a very good education, which continues, I don’t feel it was, is, nearly enough. My blind spots glare at me daily. But “success,” not so much. I know it’s naïve, politically nefarious, and/or patently untrue to say that “the cream rises to the top” or whatever; obviously there are plenty of underrecognized geniuses and, conversely, and many writers who are way overrated by the mainstream (this may even be a good working definition of the mainstream: that which habitually overrates the mediocre, the Doxa). But for whatever reason—wishful thinking maybe—I tend to think that the truly important, original, and strange work does get recognized, does get found, by those who need to recognize it and find it. That doesn’t mean prizes and advances and real estate in the New York Times and so on. But it may mean the right readership. Though it may take time—a lot of time—and time can bury people, too.

I can wait tables and bartend. That’s about all I can do. I can be a professor, I can write and edit and do other word-related-labor, and I can work in service related to food and drink. Or, at least, that’s all I’ve ever done for money. I was fired from my one day working an office job. My life as a writer and teacher is the most stable life I’ve known.

Keeping expectations and overhead low: this is the credo of poets, from whence I come. I may have hoped that certain of my books would leap into cultural prominence with a bit more gusto at the moment of their publication — writers dread the so-called “silence before the silence” phenomenon — but you have to give it time. That’s another thing poets know. (But the work has to stay in print — there’s the rub!) Since much of this is not really within my control, I can’t worry about it too much. I can do my work, that’s my job. I’d like to be invited to do something, anything, outside of the United States. I get tired of things here. So I guess I wish that had happened by now.

I don’t think the world owes anyone anything. I think we owe the world more stewardship and vision and respect than we currently are giving it, and as fellow humans we owe each other more care than our current system impels us to give. I’m with Bernie Sanders: “It seems to me that one of our goals as human beings should be to strive for a world where everybody has the basic necessities of life.” That this is so hotly contested strikes me as madness.

Of course part of me thinks that we writers and artists and thinkers are important cultural workers who should be supported by society instead of trashed by it, a la my friend A. L. Steiner’s group WAGE (Working Artists and the Greater Economy), “an activist group of artists, art workers, performers and independent curators fighting to get paid for making the world more interesting.” But another part of me doesn’t like the self-seriousness of this idea, doesn’t like the bravado of insisting that we’re doing society a great service by making our art or thinking our thoughts, and doesn’t feel like begging at anyone’s gates. So, as always, I just kind of slither around, investigating the murk in between.

Strongest emotional reaction would have to be anger, as per your first question. And there have been some spookier things I won’t go into here. Then there was the time someone on Amazon compared me to Hitler. . . On a more sanguine note, I think a couple of my books have been tear-jerkers and/or had some healing powers for others — or at least people have written to tell me so, usually about Bluets, which can serve as a sort of break-up manifesto/literary self-help book. People who have dealt with violence in their personal or public lives have told me they have been moved or helped by Jane and/or The Red Parts. I like to think of people reading my books and having reactions that have helped them in some way. But I also like to grant readers their privacy. Often what you’re so moved by when you read is an alchemical combination of what you need to hear and what you hear, which is a bit distinct from what the person wrote. The former is a bit magical, and deserves a certain privacy.

I’ve been thinking about this question for days. It’s one of the hardest ones I’ve ever received. I think because it’s “when” implies that there exist distinct temporal moments of writing, when, for me, all the writing and re-writing and editing that takes place over the weeks, months, and years it takes to write a book makes the process of being truthful a long and unspecific one, involving onion layers and onion layers of self. You might write something that feels like the pith of truth, then return to it in a week and see only your defensiveness, your evasiveness, your delusions, your stupidity. So you cross it out and try again. Let me rephrase. “When you bump against the limits of your own honesty it is as though your thoughts get into a whirlpool, an infinite regress: You can say what you like, it takes you no further” (Wittgenstein). The fool’s errand of writing is to know this and to keep on saying.