The Next George Saunders 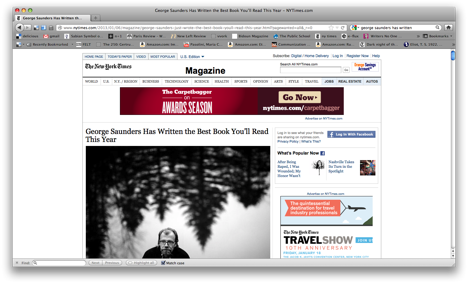 Though this is a story called “The Next George Saunders,” it’s actually a story about everyone on earth whose name is not George Saunders. Since you are likely one of these humans, I hope you enjoy the attention. If you are disappointed because you had hoped to read about George Saunders, or his new book The Tenth of December, you will have no trouble finding something to read elsewhere.

This story starts with the idea that one thing can be like another, that a likeness between two things can exist. Brother and sister, frog and toad, essay and book, you and me.  If you are like me—which I admit is presumptuous—every now and then, when reading a really good book (or a really good essay), you stop and spend at least a neuron feeling anxious because you are you and you are not the author.

This brain activity spikes when I feel unusually close to a text and, simultaneously, aroused by the moist breathe of the writer who wrote it. I felt this excitement recently, when I read George Saunders’ Pastoralia. I know that a lot of other people also like this book because everyone I surveyed seemed to say, Oh, yea, I loved that book. Plus it has a 4.6 average rating on GoodReads. I gave it 4 out of 5 stars myself. I saw that my friend Bob gave it 5.

It’s no wonder that I felt a lot of George Saunders envy while reading George Saunders’ book. In prose he gallops along like a whitetail deer, elegant and somehow silent and out of reach. Yet what makes Saunders Saunders is that this Fawn Saunders, which looked graceful from far away, suddenly sneaks up and appears super close to home. I saw him this morning eating the lettuce out of my backyard garden—the garden here being the little community plot that all aspiring writers and creative producers sharecrop to relatively low yields thanks to a genetically modified publishing industry that has been cross-bred with a mutant form of abbreviated human attention span. Gah! is what I thought. Genius Fawn Saunders is eating my garden vegetables! He’s so close to home I could pick up a deer tick when I go out to harvest, then contract Lyme disease via the tick’s bite. But then I felt consoled: if I did get sick, the compassionate Fawn Saunders might actually offer himself to help me out, becoming like the Tauntaun that Han Solo kills, whose guts the smuggler uses to keep the freezing Luke warm on the icy planet Hoth, but in this case Hoth is Earth and I am Luke and Saunders is the Tauntaun, not dead but vibrantly alive. Tobias Wolff has said as much of Saunders, calling him “a generous spirit.”

The whole of these paranoid thoughts can become distracting when I am trying to, say, concentrate on the story I’m reading. It can be difficult to concentrate on the author’s elegant deer-prose when I’m nervously checking my bruised ego for deer ticks. So I call upon Mindfulness Practice: Pause. Take a deep breath. Think of all the things you have done.  Like for example going to Southern India during monsoon season to study the mango. Or researching the American tree swallow while floating in a canoe at the Laboratory of Ornithology.  Most famous authors wouldn’t have time for such adventurous, scientific pursuits. They’re too busy farming away under the crushing weight of their reputation. And besides, many famous authors live terrible lives of pain and solitude. See Hemingway. See Carver. See Saunders.

But, wait, actually, don’t see Saunders that way. I recently read about the life of George Saunders in a New York Times Magazine piece by deputy editor Joel Lovell, who has written the best essay you’ll read this year, called “George Saunders Has Written the Best Book You’ll Read This Year.”  Turns out, George Saunders is no fit for the depressive author archetype: he did travel to Sumatra in his twenties, not as an ornithologist, but in the relatively opposite role of oil prospector. And unlike those helplessly addicted, alcoholic writers, Saunders now lives out a highly enviable existence on a Buddhist compound with his wife, daughters, and two yellow labs.

In spite of spending years working at a place called Radian Corporation, and biking to work for miles along the Erie Canal dressed in a snowsuit, which would lead most humans to conjure up crushingly far-fetched fantasy narratives with hopes of redeeming their own greatness, he somehow “realized, with the force of epiphany, that the attempts to graft his life experience onto a Hemingway-Carver framework were foolish.”  In other words, George Saunders found himself.

OK, pause. Take a deep breath. Re-read Lovell’s title: “George Saunders Has Written the Best Book You’ll Read This Year.” Something feel a little odd?  Oh, yeah, must be that the essay was published on January 3rd, which, according to my iCal, is just days into the aforementioned 2k13 calender year. Major Spoiler Alert!—George Saunders has written the best book you will read this entire year, which hasn’t even happened yet! How does Lovell know so much!? Is he like Data from Star Trek? I have to admit that Lovell’s prediction, if true, would actually come as a relief.

Part of me hopes for such a bold and daring book forecast to prove itself bewilderingly correct, like a cheap astrology reading. Only one month ago, on my birthday, my horoscope read:  “That tremendous shift taking place within you has to do with the way you embrace the events that are unfolding before your eyes.  Consider how you’re feeling about yourself . . . everything has changed, hasn’t it?” Yes, it has. Thanks Stephanie at thecosmicpath.com! And one of those things that I most look forward to unfolding before my eyes is George Saunders’ newest, best book, which, after reading Lovell’s proclamation, I can’t wait to nibble on—just after I finish my private chart-reading session with Stephanie . . .

Lovell pulls off such a provoking and catchy title—“a state of fairly high exaltation”—because he’s writing about a guy whose writing apparently titillated David Foster Wallace (whose writing titillated everyone else): “I do clearly recall, [DFW] standing in the hall in his untied high-tops, saying that George Saunders was the most exciting writer in America.” It comes as no surprise that the axe George Saunders now grinds into fiction has been so honed over the last decade as to require Saunders’ own explanation of its magical power: it simply “softens the borders. Between you and me, between me and me, between the reader and the writer.” 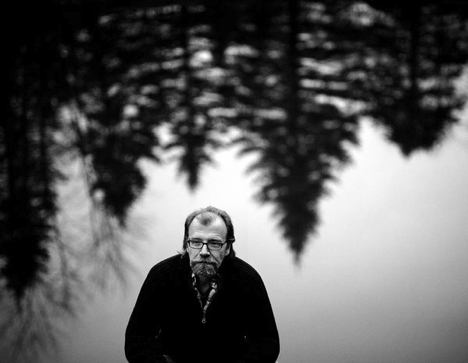 But have another look at the photograph accompanying Lovell’s text: the trees above George Saunders’ head are out of focus and UPSIDE DOWN!  He must be looking into a reflecting pool. Maybe it’s the dreamy koi pond Lovell mentions in the article? Maybe there are real koi fish swimming around in the frigid waters, eating fish food and generally doing their thing directly underneath the Reflection Saunders. That would be a game-changer because it would mean that the picture of George Saunders that we assume to be him is actually a two-dimensional facade that masks a whole ecosystem of algae and feeding fish and benevolent micro-organisms. That George Saunders, the one in the picture, is a flimsy boundary to the reality of co-existence. And if the real George Saunders, chopping artfully at the borders between two humans, is anything like this Reflection Saunders, then isn’t part of your being a translucent koi pond reflection, too? A surface waiting to been seen through for what lies beneath? And now that such likeness—between Saunders and you—has been devised, what if someone else, say you, the next George Saunders, comes along and writes a book that’s better than the best book George Saunders himself has written?

Pause. Take a deep breath. Once, a few years ago, I ran into Michael Jordan in an airport.  I asked him, “Who is the next Michael Jordan?” He looked me up and down. “There’s only room up here for one,” he said.  “Stick to solitaire, kid.” The saddest part about being the best is that you are alone. I like to think that the new year is for new possibilities, not limitations. I hope to see many different animals in the garden of 2013. After all, Lovell’s essay concludes with a quote from the real George Saunders, who said with all the innocent grace of a distant deer fawn, “Anything is possible. Stay open, forever, so open it hurts, and then open up some more, until the day you die, world without end, amen.”