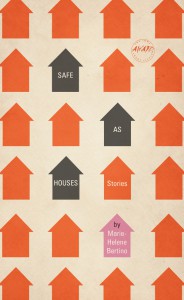 Marie-Helene Bertino’s Iowa Short Fiction Award-winning story collection, Safe as Houses, offers, among many pleasures, the readerly pleasure of allusions both cultural and literary. This type of pleasure can be dangerous, because it comes freighted with the potential for self-congratulation; it threatens to insulate the audience along with the author. But allusions, in good hands, send us forward, not back into something we already know. In the case of Bertino’s debut collection, they send us into the sometimes surreal but always convincing world of skillfully drawn plots, complex metaphors, and quirky-serious wordplay.

The collection begins with “Free Ham,” a house-fire story that ends with an image short story buffs might recognize as an homage to Raymond Carver’s story “Why Don’t You Dance?” :“everything that is supposed to be inside [the house] is outside . . . the bathtub is in the driveway, the sink is on the porch.” On the way to this stark picture of a home destroyed from within, Bertino mixes in references to icons of quotidian American entertainment — Laurel and Hardy, Charlie Brown — and so prepares us for the way her stories function: as combinations of rough sandpaper and its smooth result.

This theme continues in “North Of,” a story that has brilliant opening lines (“There are American flags on school windows, on cars, on porch swings. It is the year I bring Bob Dylan home for Thanksgiving.”) and a potentially festive, ultimately sad premise (Dylan comes to dinner before your brother goes to Iraq). “North Of” depicts the America as a land of “personal landmarks;” cultural artifacts that only mean something if we want them to. The protagonist’s brother, who has enlisted post 9-11, has given up on Dylan (whose reputation is built, of course, on war-protest songs) — something Bertino invites us to do as we watch “the bloated Voice of a Generation [use a convenience store] candy display to scratch . . . his back.” “North Of” reminds us that in the America we think we know some people literally “wouldn’t recognize the songwriter of our time if he came . . . for Thanksgiving dinner.”

But the America of Safe As Houses is also the America we know, full of references we get. An America where marital faithfulness is upheld not by loyalty, but by boringness; where the occasional car “still has a tape deck and the lighter gets hot in seconds”; and husband and wife star in their own mall circulars riding a carousel to the tune of “Wild Horses” galloping in a delving vortex of Classic Rock and Americana. The above all come from the wondrous story, “Great, Wondrous,” in which a group of college friends bound by special powers, Updike-ian upbringings, and a deep devotion to R.E.M., engage in what might be termed the major project of Bertino’s book: they try “to transport an idea to the physical manifestation of the idea” as they stand on their campus’s Nietzsche Field making a porcelain St. Vanilla cathedral disappear with their minds. Allusions anyone? We can hear Michael Stipe bellowing from his corner “…los-ing my re-ligion.” It’s a lyric that haunts the story, as it carries its literal meaning as well as its colloquial Southern reference to being at wit’s end — when the main characters are moved to make the cathedral reappear because “people are losing faith.”

Losing faith isn’t something one need worry about reading Bertino’s collection. These are stories full of sharp phraseology — “His face is AP Calculus”; “Her perfume smells like Vanity Fair magazine”; “innocuous beach pictures are framed fuck-yous.” This last is from the title story, about a man who copes with his wife’s untimely death by stealing sentimental mementos from other people’s homes. The newspapers mistake him, a teacher at a community college, for an Ivy League professor. When things get written down for the world they get writ larger. This helps to explain the technology of Bertino’s aesthetic.

When the Whales Leave – Yuri Rytkheu