The Data of Humanness 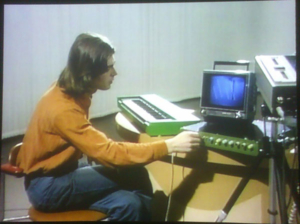 dOCUMENTA (13) is the latest iteration of a vast international exhibition of contemporary and modern art that takes place every five years in the central German city of Kassel. It is an epic maze imbued with a sense of self-generation, like a thousand fragile trains of thought winding their way into a web of unpredictable and changeable shape. A Salvador Dali painting hangs opposite a wall-sized ‘library’ of vials containing 60,000 human genes, while up a flight of stairs a collection of machines are meant to explicate Quantum Physics to visitors before they move on to encounter the story of artist Mario Garcia-Torres’s research into Alighiero Boetti’s former hotel and artist boarding house in Kabul, “The One Hotel.” In an adjacent room two walls are covered in hundreds of drawings of apples by Bavarian village pastor Korbinian Aigner, who created four new strains of apples while imprisoned in a Nazi concentration camp.

The interaction of art and science, brought together through a kind of wild free association, is a thread that winds its way through the exhibition, which ended earlier this month after a run of 100 days. The Baroque Orangerie, a grand former summer residence for Hessian gentry now converted to a museum of technology, was one of many non-traditional exhibition spaces spread throughout the city. On a dark upper floor of the museum, past a large collection of old telephones, down the hall from a handful of antique telescopes trained to distant sculptures in the neighboring park, I found a small room devoted to a mysterious Finnish artist, inventor, electronic musician, physicist, filmmaker, and visionary futurist named Erkki Kurenniemi.

A constructed human head, rolling around on wheels and speaking haltingly to visitors, rotated in jerky circles around the center of the room, while various electronic instruments ingested tactile, visual and other forms of input to spit out blipping electronic sounds. The digital noises Kurenniemi’s machines produce and the aesthetics of his creations are at this point familiar to the point of kitsch, giving the feeling at first of being in a back room lab on the set of Tron. But there was elegance to Kurenniemi’s inventions, and they were revolutionary for their time. The DIMI-O, for example, creates music through responses to video cues, allowing a dancer to produce sweeping electronic sounds with her movements:

Alongside Kurenniemi’s instruments, a row of 16 or 17 flat screen televisions displayed loops of videotape culled from Kurenniemi’s vast archive of his own life. For decades, until he became ill in 2005, Kurenniemi was obsessively creating an archive of himself as a specimen of humanity — through film, photographs, letters, and recordings of his own brainwaves — to be stored and saved as a template for a future that could transfer the data of humanness into a new, non-organic platform. As the notes for the exhibition explain, “thereby allowing the redefinition of the human species as information without the body as we know it.”

While that idea in itself is terrifying to me, coming from Kurenniemi, it seems a gesture of startling hope in the potential for technology to preserve and reproduce the essence of life. The images flickering on the screens — light playing across water, a woman rubbing her face with her hands, a pair of legs walking down the street, a road in the winter, a fruit bitten, a cigarette smoked, a pile of herbs mashed to a pulp with a mortar and pestle — come together like a symphonic tableau of nature and emotion.

Kurenniemi had a sensuous relationship with machines, seeing the digital as something to be integrated with our organic existence, and not in the dark form of movement-tracking and for-profit data mining that haunts us today, but rather as an expansion of our thinking, feeling selves. For someone like myself who often faces each new gadget or mobile phone app with a pang of apprehension and a sense of loss, it feels both enlivening and comforting to exist for a little while in Kurenniemi’s wild world of technological optimism.