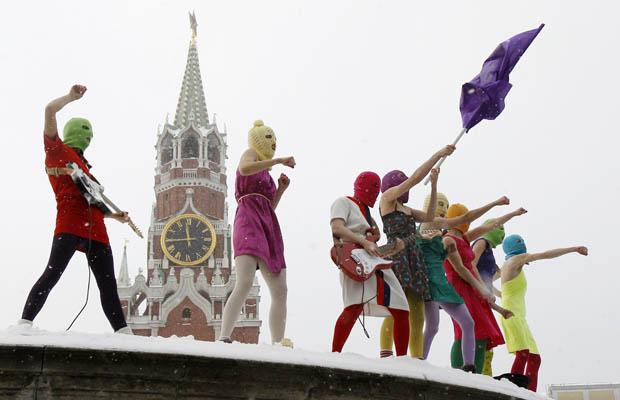 I’ve watched the video of the Russian feminist protest punk band Pussy Riot performing in Red Square quite a few times now, and every time I see it I start to feel a little emotional. They jump and scream in their rainbow colored ski-masks, bright dresses and tights, fists in the air, bare-armed in the middle of winter in Moscow. The Kremlin and St. Basil’s Cathedral, great symbols of centuries of Russian power — many times changed, but always repressive — loom overhead.  Watching them, I get a feeling that reminds me of the first time I ever heard Sleater-Kinney as a teenager, which is no coincidence — Pussy Riot take obvious cues from American riot grrrl punk (more on that from the Guardian here).

But Pussy Riot is more about the act than the music. Their band is a performance of protest. The members of Pussy Riot are careful to remain anonymous, and the only way to see them is to catch one of their surprise guerrilla performances. They formed in the late summer of last year as a reaction to government policies that discriminate against women, and they have only gained momentum since the announcement in September that Putin planned to seek a third presidential term and the December parliamentary elections that sparked the most significant protest movement Russia has seen in decades.

Witnessing such a brazen and explosively, almost joyfully angry gesture as Pussy Riot in Red Square gives the impression that really, maybe, things in Russia will change someday. And that is the whole point, of course. In the coming weeks, as the controversial elections that are sure to put Putin back in the presidency approach, there will likely be more performances from Pussy Riot. In the meantime, I have done my best to translate two of their songs into English so we can all better understand and appreciate their particular brand of rage.

A mutinous column marches on the Kremlin

Blowing up windows of FSB offices
Bitches piss on the Kremlin walls
Announcing a riot, Abort the System!

Act at dawn? Don’t start to question
For our and your freedom we’ll whip them to submission
The glorious Madonna will teach us to fight
The feminist Magdalena stood up for democracy

Walk out on the street!
Live on Red Square!
Demonstrate freedom
With citizen rage!

Soon the regime will censor our dreams
The time has come for the battle to explode
A band of bitches of a sexist regime
Asks for forgiveness, armed with a feminist spike

Go out on the street!
Live on Red Sqaure!
Demonstrate freedom
With citizen rage!

Occupy the city, it’s your kitchen, it’s your frying pan
Walk out with a vacuum, have an orgasm
Pervert the battalions of political chicks
While stripped naked cops celebrate the new reforms

Kropotkin-Vodka splashes in our stomachs
You are doing fine, but those Kremlin bastards
Have got an uprising of out-houses, a deadly poisoning
Migalki[iii] won’t help, soon they’ll meet Kennedy

Took some kind of nap, but the day still grinds on
Brass knuckles in my pocket, feminism with a sharp edge
Carry that soup over to Eastern Siberia
Then our riot will become sufficiently rude

[i] Pyotr Kropotkin is a celebrated Anarcho-Communist from the turn of the century.

[ii] Russian provides a far greater variety of ways to say “Fuck” than English. This statement is less repetitive in the original.