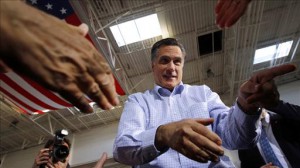 A series of nut-tap gaffes by presidential candidate Mitt Romney has resulted in a diplomatic imbroglio. Photo: Reuters.

BOSTON — On Saturday, June 16, Mitt Romney’s campaign bus stopped at a Wawa convenience store in Quakertown, PA. Though, in the days that followed, the mainstream media would focus on the presidential hopeful’s divisive hoagie comments, as well as his preference for machines over human employees, Full Stop has been alerted, by sources in the Romney campaign and the State Department, that Romney’s trip to “Wawa’s” was much more eventful than even MSNBC would have you believe.

According to our source, a top advisor in the Romney campaign, while he and other staff members placed Romney’s sandwich order on one of Wawa’s now-famous touchscreens, Mitt, in search of his beloved Peanut Chews, wandered to the candy aisle. Upon entering the aisle, Romney reportedly encountered three teenage boys who appeared to be flicking each other in the groin with the backs of their hands. Romney later confided to our source that, though he was initially confused by the boys’ actions, he couldn’t help but “see something of himself in the lads.”

“Hey, guys,” Romney said as he approached the youths. “You touching each other’s genitals?” “Get lost, perv,” one of the boys responded before flicking Romney in the groin, an act commonly referred to as nut tapping by teenagers. Nut tapping was popularized in middle schools during the late 90s, when it was frequently prefaced by the question “What is the capital of Thailand?” The practice largely fell out of use, however, until a recent resurgence spearheaded by professional and amateur basketball leagues.

After the blow, Romney crumpled, bringing several boxes of candy down with him as he fell to the floor. As Romney’s security detail apprehended the boys, who have not been identified at this time, Romney attempted to pull himself up, which only made the pain worse. “Trying to get up from a hit like that is useless,” our source says. “You just have to lie there and wait for it to pass. Luckily, the Peanut Chews had landed nearby.”

But while our source indicates that no permanent physical damage was done, the encounter did not fail to leave a mark on Romney. “He basically turned the campaign trail into a war zone,” the source says. “You never knew when you were going to get it. And covering your groin with your hand just made things worse. He would just watch you, waiting for you to drop your guard. We figured it was best to just let him get it out of his system.”

A week passed, however, and Romney had still not grown tired of the pastime. Nut tapping became mandatory for all staff members. One member of Romney’s inner circle, who resorted to wearing a cup, describes Romney at that time as a “nut-tap fanatic” and goes on to claim that Mr. Romney went so far as to create a personal philosophy based on the painful surprise attack. Romney, who has been plagued by gaffes and accusations of being “out-of-touch” with the middle class, was heard describing the act as “the perfect expression of the sensuality and violence of the lower classes,” as well as “a playful reminder of the suffering and uncertainty that the common man must endure before his short life is snuffed out.” 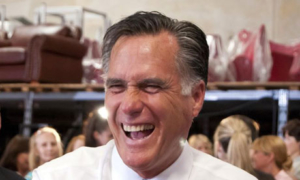 “He basically turned the campaign trail into a war zone.” Photo: The Guardian.

Throughout June, Romney not only continued to inflict regular nut taps on his subordinates, but also began to expand his reach to men — and even women — outside the campaign. Sources indicate that his infatuation reached its apex during his recent trip to England, Israel, and Poland. The situation escalated to such a point that the State Department was left with no choice but to intervene, trailing a few hours behind the Romney caravan to clean up any diplomatic fallout caused by the nut tapping.

Then, shortly after returning home from his European sojourn, Romney’s nut tapping spree came to an abrupt end. Going against an internal memo, a disgruntled intern at Romney’s campaign headquarters alerted Mr. Romney to the fact that, during his trip, he had unwittingly tapped the nuts of several confirmed and suspected homosexuals. This following an incident in which the intern, who had been personally tasked by Romney to carry several large boxes from one end of the office to the other, was tapped so severely that he “hurled like a freshman.” After hearing the news, Romney was devastated.

“I really thought he was going to hurt himself,” says an advisor close to Romney. “He locked himself in the bus all evening and refused to come out.” According to another member of the campaign, who also wished to remain anonymous, “He went to Europe in order to ‘find himself’ — his words, not mine — but, like so many before him, he lost his way in ‘a fog of European decadence and loose, socialist mores.'”

Over the following days, concern grew that the campaign would have to be called off. “We knew that a trip outside the U.S. could be dangerous for Mitt’s worldview,” our source says, “but we had no idea things would get that bad.” But just as quickly as it began, the crisis passed. “Yeah, some genius had the idea of letting him play with a laser pointer . . . big mistake.”

Though Romney’s spirits have lifted, the State Department is reportedly still hard at work cleaning up the mess. “We’ve basically been spinning this as a Mormon thing,” says a member of the department, “but come on — the guy was slapping people in the balls.” It was this same source who provided Full Stop with the following list of victims. “At a certain point,” the source says, “they’re not gaffes, they’re character flaws. The public has a right to know.”