A Commencement Address From the Slapstick President 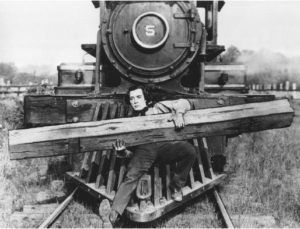 The commencement of Buster Keaton took place one year after my own. I returned to school for the occasion. There he was, up in front, somehow, someway managing not to injure himself. Of all the mothers in the crowd, Buster Keaton’s, if she had been there, would have been the most nervous. Buster Keaton makes his way like a fledgling bird, all wings and limbs, so much motion, so much energy, so little sense of direction, buffeted at times by the wind, at others by his own volition; a little bit like myself in those ways.

Had he been drinking? I’m sure, like the others, he had been drinking all week. For all I know, he’d been drinking four years straight — it has happened before and it will happen again. But that, I think, is beside the point. For although he moves with the careless assuredness of one intoxicated, drink is just one of many ways out of abstraction and into distraction. Teens harness their gangliness through their drunkenness, discover their body there, just as the newly collegiate discover, in the intoxication of ideas, that their mind is the capacity to move in all directions at once, the necessity to.

The music stops, they pause the film. A moment later, Buster Keaton can be seen running one of his gags backwards. It’s towards the end of the movie, he’s on train tracks over a valley. In front of him a wall of flame and beyond the flames, his two great loves: Annabelle Lee and his train, The General.

It’s commencement eve and I’m watching a small orchestra prepare to perform a live accompaniment to the silent Buster Keaton film The General as part of the weekend’s festivities.

This will be my first time seeing the film, and as I wait for them to continue, I realize I will never again not have had this experience. Here I am, sitting in a theater, undergoing a phase change, jumping from will watch to have watched. It’s the same metamorphosis that I’ll be observing tomorrow, over and over again; one by one, each student will walk up without a Bachelors degree, and then, suddenly, “by the power vested in me by the board of Trustees . . .” they will.

The mothers and fathers will think, “God, how much time has passed.” It’s these occasions, these gatherings in which we are reminded, suddenly, as if by the weighted arm of a clock reaching its zenith, moving along fluidly, stealthily, imperceptibly, until this moment when all lets loose, all cogs and springs releasing their latent energy (the stars in the sky too, must be in some kind of alignment): yes, it is inevitable, the universe is ready. “My babies,” they will moan (everyone around Buster Keaton’s mother will admit that he still has such a babyface), and then, gathering themselves bravely, they’ll shake their heads with wonder: “my, how time flies.” Something is ending, something is commencing. And so it is at each of life’s stations: I never drank, I have drunk, I never had sex, I just had sex, I don’t have a job, I got a job, I don’t have a child, I have a child, etc., etc., ad nauseam.

But there’s more than one way to divide the day, to denote the passage of life experience. Breath, rise and fall of sun, the changing of the leaves, the changing of the guard. Articulations, notches, the regular and sudden burst of sound, and its absence. The clanging of a factory bell, the ringing of a school bell. The ticking of a watch, the whistle of a train.

In The Railway Journey Wolfgang Shivelbusch describes the way in which the train, beloved by Buster Keaton, and the general development of the railway in the 19th century played its part in the development of our presently dominant sense of time — the regularity of train traffic required its standardization across vast regions. It also affected the way we think about the progression of experience. If a perception of the time it took to move from one place to another was once tied to the physical capacities of the horse and the cart, or the endurance of the human body, the train, Shivelbusch explains, prompted an abstraction from these physical capacities. “The railroad did not appear embedded in the space of the landscape the way coach and highway are, but seemed to strike its way through it.” In the train, the typical traveler becomes another commodity to be shipped from one point to another, “human parcels who dispatched themselves to their destination by means of the railway, arriving as they left, untouched by the space traversed.” We look back, we look forward, the in-between disappears. “The railroad only knows points of departure and destination.”

These properties that we find in examinations of the railroad, of abstraction, standardization, rationalization, and the reduction of time and space to points of arrival and departure, are the facets of a particular mode of thinking that Lewis Mumford, in his magisterial Technics and Civilization, describes as being commensurate with a wider collision between old habits and new technologies which took place long before the industrial revolution. In the train and railroad we encounter, materialized, habits of thought which Mumford finds lurking in the social configurations of the monastery with its cloistered living, its practices of strict self-discipline, the ringing of bells to mark hours of prayer.

In the commencement ceremony we find again the ringing of bells, the moment of prayer, the marking of a destination reached: a destination that points towards another departure, towards far greener destinations. If it is true that time does drag on through these ceremonies, that younger brothers and younger sisters inevitably kick their legs and yawn loudly in attempts to draw stares away from their elder siblings up on stage and towards themselves, that the seemingly endless repetitions of “Pomp and Circumstance” threaten to stall it completely, this is quickly forgotten in the aftermath, in lieu of some morsels of commencement speech wisdom and the more important tasks that follow.

The parallels shouldn’t seem too surprising. As Sir Ken Robinson discusses, our current model of education comes out of the common cultural and economic theories and practices of industrialization. For Robinson, like the factory and the train, standard education relies on standardized blocks of time; and just like a product placed on a conveyor belt or being shipped by railroad, students are delivered in sequestered, age-specific groups from point to point and turned out as finished products: self-sufficient, and self-possessed but also, if no defects can be found, productive members of our society and economy.

There they are: Success! Triumph! They made it! Hip hip hooray!

Or as President Obama put it in his recent commencement address to the Barnard graduating class of 2012, “things will get better — they always do.”

A conception of time based on the schedules of trains leads us to a paradoxical invocation of work ethic (“You’ve got to want it,” Obama advises, “it will not be handed to you”) and an assurance of inevitable success, that things will work out.

Where President Obama balances between will and inevitability, we find Buster Keaton, on commencement day, not charging ahead to shape a future, but pausing, vacillating, everywhere at once. Bumbling, stumbling, crashing forward. As he moves in to receive his diploma and shake the President’s hand, Buster Keaton will trip, something sharp will fly through the air, the American flag will totter tenuously, but somehow, he’ll recover, degree disappeared, but dressed in the gown of the President himself, conferring degrees upon his former compatriots.

In counterpoint to Obama’s statement that things will work out is Buster Keaton’s modified: things will work out as they will — they always do. Although he lacks elegant words (for all I know he cannot speak), Buster Keaton’s performance is a rousing commencement address in itself, expressed through a physical comedy of collision and combustion. Although Buster Keaton’s slapstick makes contingency appear inevitable, it is disaster that he keeps shoveling into the engine, forward motion is not arrival, but total collapse diverted. Just. (What’s seen as progress is only really inevitable after it has been caught on film. Then we can look back, trace a clear, upward moving track.)

Again, the conductor pauses. The music stops. Keaton moves on, silently for a while longer, flying through the air, hitting the water. A prelude to the great train splash that will follow.

Was this act reflective of an individual “eager, impatient even, to step into the rushing waters of history and change its course” (“That defiant, can-do spirit is what runs through the veins of American history. It’s the lifeblood of all our progress,” Obama intoned), or did he just accidentally find himself there? I watch him rewind, up out of the water again, through the flames, back onto the tracks.

I watch them flip back pages in their scores, many of them people I love. Outside they have probably finished stringing lights across the trees. The night is warm, families will undoubtedly have begun to gather, the paths that cut neat, efficient ways across, hypotenuses that divide the square into geometric forms, will not be able to handle the volume of foot traffic. Pedestrians will have overflowed onto the grass. Children will have climbed into the trees.

Right now, Buster Keaton is a nobody. In fifteen minutes he’ll be Lieutenant. Tomorrow, some young people will process down the aisle, pushed by their own desire for progress or pushed from behind we may never know, and Buster Keaton will walk with them. They all will shake hands, they all will smile, they all will clutch diplomas to their chests. Then there will be photos. Barbeques. Then move-in day in reverse: the walls become bare, the drawers empty, the clothes fold into boxes and duffels, everyone walks backwards. Packing the car (it will be hot, they will sweat, but better than four years earlier, remember how it rained?). And then the ride home. And then. Perhaps one day Buster Keaton will become the first slapstick President, and he’ll have to find a way to put it all into words. But for now, Buster Keaton floats through the air, pausing before, come what will, something commences.